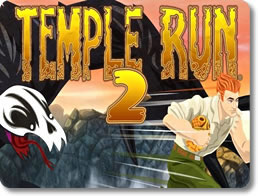 Run for Your Life from the Clutches of the Temple's Demonic Ape!

Time for Another Not-So-Leisurely Jog

It's just one of those days. One moment, you think you've just made the discovery of a lifetime within the ruins of some ancient civilization. The next, you're running for your life from over a thousand pounds of demonic simian fury. It stinks, but that's just the way things are sometimes. No one ever said archeology was easy after all.

Get ready to sprint a few hundred more laps around what remains of the ancient precursors. If you want to survive the treacherous ruins of Temple Run 2, then you'll have to brave even more deadly traps, escape an even more fearsome guardian, and run even faster than you thought a human could ever possibly run. If that sounds dangerous, that is because it is, but fear not! An arsenal of even more awe-inspiring powers is at your disposal, provided you have the courage and endurance to grab them.

Love endless runner games like Temple Run but want something a little faster? Try Subway Surfers, one of the hottest games in the app stores!

The Sights and Sounds of the Temple

Delve deep enough into the temple ruins, and you will both see and learn many amazing secrets. That is provided you're able to get in and out of them alive.

How to Avoid Huge Apes

You need to be fast on your feet if you want to have any hope of getting out of this temple in one piece. Luckily, you don't need to actually use your feet to survive Temple Run 2; you just need some fast-acting fingers.

Give Yourself the Edge

Running through the temple is a lot like a race, except if you lose, then you die. That alone should give you enough incentive to keep on running. Just in case it isn't, then make it your mission to nab all the pick-me-ups you find along the way. More often than not, they will determine how much of you will be left once you get out of this crumbling primate house.

It Goes the Distance

If the endless runner genre could be likened to a nation, then Temple Run 2 would be its king. With danger lurking around every corner, high-speed chases, endless bounties of treasure, and always-changing scenery, it's easy to see why. It's a tough game to master, and an even harder one to put down, so if you're feeling up to the challenge, see how far you can go in Temple Run 2!

Another Temple of Doom

If popular media has taught us one thing about archeology, it's that it's the field you go into if you want to lead a life of non-stop thrill rides. Ancient civilizations clearly had nothing better to do than to rig their temples up with traps and fill them with monsters, so of course going into them is always going to be an adventure. Such was the case with Imangi Studios' Temple Run, an endless runner where you guided one hapless adventurer through the pathways of a ruined temple while a horde of angry monkeys constantly nipped at his heels. On its own, it was a fine game that helped to popularize the genre, but it was admittedly a little rough around the edges. Fortunately, the developers listened to what its many fans had to say, and thus aimed to make the sequel one of the most solid mobile games around.

The first notable improvement between Temple Run 1 and 2 are the graphics. While the first game was by no means ugly, it felt a tad generic and gloomy, particularly since it took place in a temple in the middle of a dreary swamp. Such is not the case with Temple Run 2. Not only has the graphical fidelity gotten better with sharper textures and better animations for the characters, especially on the part of the demonic apes that chase you, but the art direction is in general a lot more inspired. The app's default temple, Sky Summit, is a fantastical area that's bright, colorful and rife with ornate carvings on its floors, collapsed rooftops and railings.

More than that, the environment constantly changes; you'll be running on solid ground one moment, rolling through a dusty cavern the next, and sliding down some rapids that show off the app's stunning water effects. The world honestly feels alive at times; a path might look clear before a tree suddenly falls down on it and forces you to take action. That's just one level. Frozen Shadows is another great-looking world that depicts a temple in a frozen wasteland complete with ice caverns, cold rivers, pine forests and oversized animal skulls. Each world has a personality of its own, which makes playing through them all a hoot.

It helps that the level design is absolutely top notch. While the gameplay is admittedly simple, what with you weaving, jumping and sliding around, over and under obstacles, a lot of care has been given to make the worlds feel dynamic. The hazards you come across come in all shapes and sizes. They're thrown at you fast enough that you need to stay on your toes, but not so fast as to be exhausting. The game always requires you to do different things, with many obstacles being multifaceted. It's not unusual to find yourself running on a narrow bridge that requires you to hold your device straight so that you stay centered as you leap over chasms, or to slide under a fire trap while weaving around piles of rubble that, if stumbled over, will slow you down and allow the big ape behind you to close the distance. There are even some obstacles that can be evaded in more than one way, each with a notable tradeoff.

Temple Run further shakes things up when it gives your adventurer a break from running and instead allows them to try another mode of transportation. You'll occasionally find yourself riding in a mine cart, snowboarding on a skull, and sliding down a river, among other things. While these don't fundamentally change the way the game is played, they do determine what sort of obstacles you'll be dealing with. Expect to duck under a lot of trees while being carried down a watery current, or swerving down mine shafts that are still open to avoid the tunnels that have collapsed. They also have a subtle effect on your character's actions; for example, the snowboarding jump is a bit lower than the running jump, which means you need to time your leaps a lot more carefully whenever you're perched on that skull.

What makes the levels most impressive is how they ramp up the challenge over time. They start out simple enough, but get harder the further on you go, throwing more and more nuanced hazards at you at a faster pace in a way that feels natural and well balanced. The worlds of Temple Run 2 may be procedurally generated, but they sure don't feel that way! The only weakness in the whole package is that there are times when the visibility feels a tad low, which might cause more than a few unfortunate deaths for you. It's not a problem in Sky Haven, which is effectively made up of a bunch of tan-colored bridges built in the open blue sky, but on levels that take place on the ground, it can be a little difficult to see just what lies ahead at times, especially when you're moving at over 60 miles per hour.

Like every good endless runner, Temple Run 2 features a number of collectibles for you to grab while you're on the run. Power-ups are the most obvious, though this app is sadly lacking in variety. There are really only three to take into account; the Shield, which will absorb one fatal hit for you, the Boost, which makes you temporarily invincible, and the Magnet, which draws coins to you. These get the job done and you'll want to get them when they appear, but the game could have benefited from something more exotic.

Power-ups are temporary, but if you want something a little more permanent, then coins are what you need to collect. Getting them can be a little risky at times, as they might require you to play a tighter game of chicken with the obstacles than you'd normally be comfortable with, but it can be worth it. You can buy all sorts of upgrades from the in-app store that are useful and will make your running days a whole lot simpler. There's one that increases the chance for power-ups to appear on the map, another improves the value of coins you collect after a certain distance is covered, and others up the quality of the powers you can attain. Overall, they work and you will want to get them, but just like the regular power-ups, they're still kind of drab.

You'll still want to accrue a fortune of gold, as coins not only improve your score, but they build up a power meter that allows you to unleash a special ability. This ability is equivalent to a power-up, and what exactly it does varies depending on which character you play as. For example, Guy Dangerous has the Shield on hand, while Scarlett Fox has invincibility. It's not much, but it is nice to see a little bit of differentiation between characters, provided you're willing to spend the cash required to unlock most of them.

Ultimately, there's not a whole lot of bad stuff to say about Temple Run 2. It takes what worked in the first game, polishes it up, and builds on areas that needed some refurbishing, even if a few components do feel a bit boring. However, the end result is a very fun and highly addictive game that works amazingly well in short bursts, but which can easily eat up whole hours of your time if you're not careful. 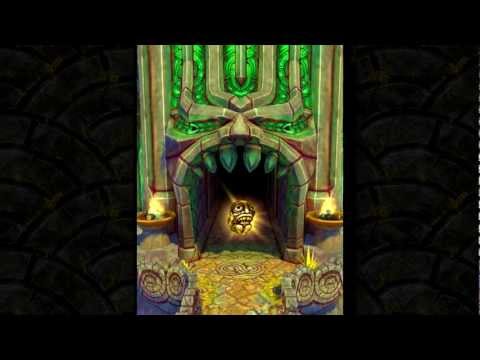 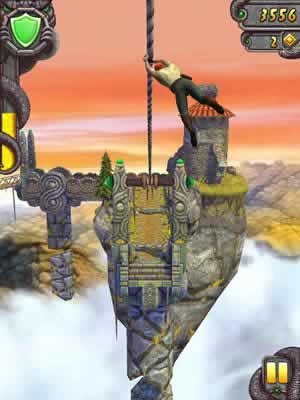 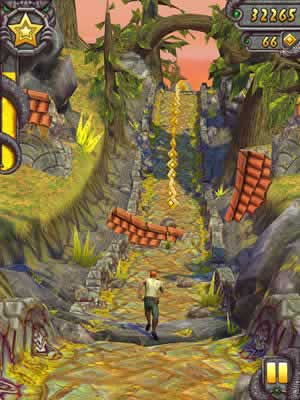