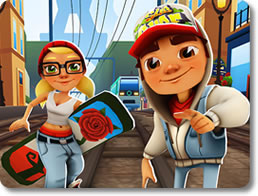 The Most Extreme Surfing Ever

You’re about to take part in the wildest and most dangerous illegal sport ever conceived. Since oceanic surfing, bungee jumping and skateboarding do nothing for you, you’ve come up with something even better: subway surfing!

Run on the train tracks, surf on top of the trains themselves, and keep out of the track inspector’s reach as you defy death over and over again!

If running is too slow for you, then whip out your futuristic hoverboard and show this antiquated technology who’s the boss. Grab coins, get power-ups and prove that you are the most extreme adrenaline junky in the world with Subway Surfers!

A New Way to Ride a Train

With Subway Surfers, you get a fast-paced endless runner with a lot of attitude. Sharpen up your reflexes and make certain that your hand-eye coordination is up to the task, because you won’t be slowing down for a second. The track inspector is on your tail, so you have to keep moving through this hazard-ridden world.

Power Up Your Run

You may have speed and agility, but sometimes you might need a little more to make it as a successful subway surfer. For that end, just sample some of the power-ups you can find on the tracks and elsewhere. There’s a good variety of stuff out there, and everything can increase the distance you cover when used strategically.

If running forever and ever does not sound like worthy goal in and of itself, then you will be delighted to know that Subway Surfers also hosts a variety of smaller missions to be undertaken. Completing them within the span your run will net you even more goodies and pave the way for even more challenging missions.

On the Right Side of the Tracks

The life of a subway surfer may be short and suicidal, but there’s no denying that it will be a whole lot of fun while it lasts. However, you can and will enjoy Subway Surfers for as long as you like. It’s got fantastic visuals, a slick presentation, awesome power-ups, and unmatched mobility. The hoverboard in particular does a lot to put it well ahead of the competition in more ways than one.

If you want to experience an endless runner that’s oozing with style and bursting with color, then make Subway Surfers your first and last stop.

The endless runner has been common in the mobile gaming scene for a while now. Temple Run proved that the formula could be a load of fun, and everybody else has been trying to cash in on its success ever since. Subway Surfers is yet another one of these hopeful contenders. The bad news about is that it doesn't do much to revolutionize the runner.

The good news is that it does not really have to. It takes what works, polishes them to a mirror shine, and throws in some surprisingly good production values to the mix. All of this on top of the fact that it's very generous in dispensing with the in-game currency needed to buy all the fun power-ups, and you have a very worthy contender in the endless running ring.

The Spectacle of Hoverboarding

Subway Surfers has a rather odd theme. You take control of a hoverboarding skater punk and run down the railroad tracks, evading the fat deputy nipping at your heels every step of the way. It may sound like one of those lame attempts to pander to kids in the '90s, but it works surprisingly well and isn't anywhere close to obnoxious as it could have been.

It helps that the visuals are incredibly bright, cartoony and creative; the characters and scenery honestly wouldn't look too out of place in a Pixar film. At the same time, they bring to mind many classic platformers like Sonic Adventure and Psychonauts, which further gives them a more timeless quality.

The music itself harkens back to those kinds of games as well. A catchy and upbeat tune accompanies your subway-surfing endeavors. While you won't be listening to it on your iPod anytime soon, chances are good that you'll be bobbing your head to it long after you've put the game away.

While we're on the audio front, one thing to be especially thankful for is that the developers were wise enough to keep the player characters mostly voiceless. If you're worried about potentially annoying voices breaking your concentration with embarrassing '90s catchphrases, don't be.

Once you get past the wonderful visuals, things should start to look familiar. Subway Surfers plays like most other endless runners out there; you run endlessly through a hazardous track, avoid obstacles, collect coins, pick up speed, and unleash power-ups to get yourself out of a jam. Every action you can do, like strafing side to side and jumping, is performed by swiping your finger on the screen in the corresponding direction. Controls are very responsive; the skaters practically move along with your finger, helping this game feel especially slick.

While the gameplay is mostly cliché, it does at least add its own little spin on things. The most notable of these is the way that it handles hazards. While most runners make use of things like pits, traps and overhangs, the one thing you really need to watch out for in Subway Surfers are oncoming trains. Trains can be avoided by simply getting out of their way, but it's far more interesting to hop on top of them. Trains add a fun dynamic to the action as they allow for more vertical gameplay. You can jump or strafe from one train and onto another, grab coins and other goodies that are perched on them, and so on.

Power-ups are as fun to activate in this game as they are in others. You've got the usual suspects, like the magnet that draws more coins to you, the jetpack that blasts you forward above all the hazards, and the head start that propels you a good distance right at the beginning.

However, Subway Surfers' most interesting item would be its iconic hoverboard. Breaking this baby out gives you all sorts of perks. You move faster, you jump higher, and best of all, you get a greater degree of control over your movements. You can stay aloft in the air for longer than you could on foot, but you can also just as easily end the jump prematurely and bring your character back down to the ground with a downward swipe. This allows for all sorts of crazy stunts, particularly if you want to get every last coin out there. You'll have to leap into the air to get some loose airborne change, then rocket back down within a second to get the stuff on the earth. It's very hectic and a load of fun to pull off.

If there's one thing that Subway Surfers is lacking that other similar games have, it's tilt controls. Many endless running players have seen their greatest runs end messily due to an unresponsive accelerometer or an accidental shake of the device. If you're one of them, then you might have a chance to rejoice. However, it comes with a price. Subway Surfers unfolds entirely across a straight line. There are no turns to make or corners to avoid.

That itself has its pros and cons. On the plus side, it means that you don't need to worry about blind corners anymore; you'll be able to see everything that can kill you head on. Things are a lot more fair and there's much less guesswork and trial-and-error to consider.

However, it also means that there are no surprises either. Turning a corner in Temple Run can be a tense affair; you just never know what kind of deadly trap could be waiting for you. This kind of suspense will likely be missed by a lot of players.

It's especially exacerbated by the feeling that the path isn't really getting more dangerous the further on you go. Things don't go faster, new traps don't get added, and trains don't become more common. Running for 20 miles straight isn't going to feel like an accomplishment in Subway Surfers; it's just going to take a while.

Overall, Subway Surfers' greatest strength could also be its greatest weakness. On one hand, it's more forgiving and fair to the player. On the other, it's also less challenging than most of its ilk. Whichever side of the fence you lean on is really going to depend on what kind of player you are.

Despite that issue and its lack of originality, Subways Surfers is still a fun and well-made game. More than that, it's not a demanding one either. It may be free to play. It may give you the option to spend real money to buy upgrades. However, it's only an option, not a requirement. This game never attempts the hard sale on you. Furthermore, it's very generous with the coin payouts; just by simply playing Subway Surfers, collecting coins, and completing challenges, you'll earn more than enough virtual money to spend as you see fit.

With that in mind, you have nothing to lose by just giving Subway Surfers a try. It's sharply-made, it controls like a dream, and it looks absolutely fantastic! There's really little else you could ask for in a mobile game. 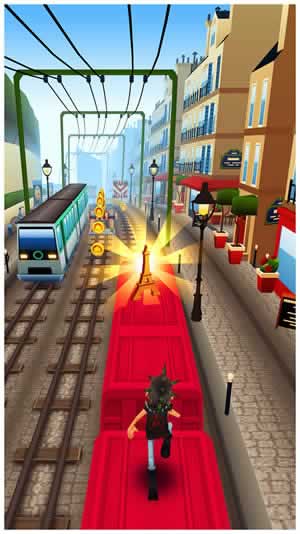 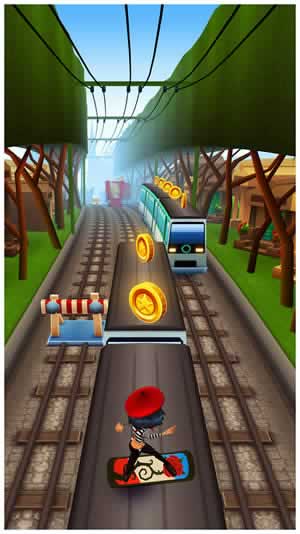