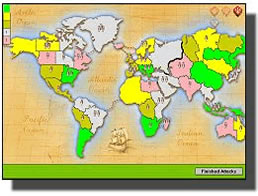 It's Classic Risk, Only Better: It's Conquest!

One of the most popular board games ever, Risk set a new standard for strategy fun, and now Conquest is here to improve the formula even more!

You're a charismatic army general in command of vast armies loyal to you and you alone! To win, you must conquer the entire world by capturing every territory and eliminating your rivals.

March your troops all over the face of the Earth with this simple and addicting Risk clone!

All the Benefits of the Risk Board Game, None of the Drawbacks

Are you tired of slowly counting out armies and endlessly rolling the dice over and over again? Conquest does away with that repetition by introducing an extremely fast counting system that speeds the game up and makes for more strategy, intrigue, and action!

Conquest is specifically designed to be easy to learn, understand, and play. Gameplay flows very well and there's rarely a dull moment since the computer does all the boring stuff for you!

Hundreds of New Maps to Play On - Tons of Replay Value!

With Risk the board game, you get one board - one map - to play on. With Conquest the computer game, you get the standard map plus over 100 more!

Great Risk-style gameplay on maps of the United States, Europe, Old Yorkshire, Di'Mul Jar, and many more. Mount a campaign to conquer the lost city of Atlantis! These are just a few of the playable maps available to you.

With so much variety, Conquest delivers almost limitless replay value!

Challenge Players All Over the World

In single player mode, vie for world domination against up to seven opponents! Whether you enjoy a big brawl with lots of enemies or a strategic one-on-one battle where one wrong move spells disaster, you can make it happen with Conquest.

For more excellent Conquest experiences, face off against your friends over a local network or even take your skills to the Internet!

In Conquest, each of your computer opponents has their own special characteristics and tendencies which influence their moves and overall strategies. Some are bold, some placid, and some are kind. Every AI player has a value for nastiness, paranoia, and aggression, which are unique features to this game compared with other risk games like Risk 2, so if you were expecting an easy cakewalk, you might be in for a surprise!

At the same time, you can adjust the intelligence of the computer to any of four levels, from very clever to very stupid. Always get a game that fits your experience and ensures that you'll have a great time playing!

If you've ever played Risk or if you're just looking for a great strategy game, give Conquest a try.

Conquest is in essence a Risk clone which reproduces the fun and addictive gameplay that fans of the classic board game have enjoyed for years and brings it to your PC. Gain armies, obtain territories, and trade in cards for more reinforcements as you attempt to achieve world domination.

One very nice feature is how quickly games can actually be finished with this PC port since the computer takes care of most of the mundane tasks which take so long if you are playing the board game. For example, it is very conceivable to play a game all the way through in only thirty minutes rather than spending that time just to set up the initial board.

Another interesting feature is the variability in computer controlled characters. Besides having the option to set the AI intelligence to different levels, ranging from very clever to very stupid, each computer controlled character has distinct levels of nastiness, paranoia, and aggression which affects whether they are bold, placid, or even kind in relation to you. This tends to adds some intriguing gameplay and keeps things interesting as you play through a few times.

Hundreds of Maps to Play

The addition of hundreds of new maps also means there are hours of playtime to enjoy as well. Finally, there are several interesting charts and tables that provide information on such subjects as win/loss percentages, how often you rolled certain numbers, history graphs on how the game progressed, and several other facts which provide new insights to gameplay and player trends.

The only issue with this title is that the graphics for the most part are rather bland and do little to draw players into the action. Battles tend to be little more than watching numbers whittle down, and in general when huge armies of forty or more fight you'll most likely just hit the “all” attack which quickly runs through all attacks until one side has lost all of its armies. While this greatly speeds up play time, it detracts a bit from the feeling that battles have much importance.

Conclusion - Good Risk Game With All the Essentials

Overall, Conquest does a great job of recreating Risk-style action on your PC and greatly speeds up play time. The addition of hundreds of new maps is a great feature which mixes things up and provides many more hours of gameplay. If you are any kind of Risk fan, then Conquest is a perfect addition to your library. The flexibility in difficulty makes this a great title for new players as well, although the action may not be for everyone.

Clips from the game including a few examples of the maps available in the full version. 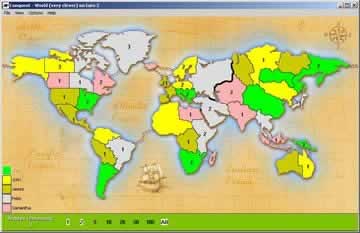