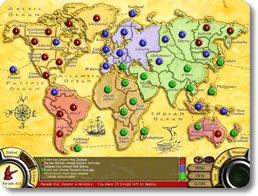 The Best PC Version of Risk Ever Created!

Risk: the Quintessential Game of Action, Strategy, and World Domination!

As a commanding general, guide your armies with honor and skill and you just might win the day. Your goal, of course, is simple: take over the entire world!

With Risk II, you can experience this wonderful game, one of the most popular board games of all time, like never before!

The official computer version of the Risk board game, Risk II is incredibly rich, detailed, and varied. It provides all the benefits of Risk plus a whole lot more, and none of its less enjoyable aspects.

Forget about long setup times, counting out armies, or keeping track of cards, because Risk II is a much quicker and smoother way to play. Here's one thing for sure: this ain't your daddy's Risk game!

Whether you're a fan of traditional Risk or might be looking for something new, you're in for a treat with Risk II!

With all these game modes, Risk II gives you a great blend of the old and the new!

The Gameplay in Risk II Provides Tons of Depth and Complexity

Just like you'd expect from a Risk game, Risk II includes lots of customizable rules and options designed to give you the very best gameplay possible!

New and Improved Graphics and Animations!

The classic Risk board will be easily recognizable - it's reproduced crisply and clearly, and every detail is accurate to the original. For a new perspective, switch to globe view in which you see the world as if from outer space.

Yet another great feature of Risk II: battle animations! Every time your troops engage the enemy, you've got a front row seat as the camera will zoom in on the action and you'll actually see infantrymen, cavalrymen, and artillery cannon firing at each other from whatever territories happen to be the battleground at the time.

Can't find anyone to play board game Risk with you? Get Risk II and you won't have to worry about that problem ever again!

Go up against a bunch of computer opponents, grab a friend for a hot seat game, or play friends over a local network. When you're ahead, laugh it up with the in-game chat feature!

All things considered, Risk II is truly one of the best video games of its kind you will ever find, bar none.

Game mode variety, gameplay options, great graphics and animations, multiplayer - Risk II has it all, so what are you waiting for? Get your campaign started today!

Other Recommended Games to Play

Since Risk 2 is discontinued, we've come up with some suggestions of other games on our site you might like:

Risk II brings the classic board game of world domination to your PC in a way that stays true to the original gameplay, while adding in plenty of interesting new twists that in many ways improves upon it.

There is still the Classic game mode where players each take turns reinforcing, attacking, and consolidating as well as a new Same-Time mode where all non-combat phases of the game are handled for all players simultaneously. There are several new rules in this game mode as well such as different die based on the size of your army, mass invasions when several players are attacking the same country, and other changes which drastically change player strategies. While Same-Time mode can be a much more tense and cut-throat experience, it does a very good job of keeping things balanced and is great for those players looking for a new challenge.

Plenty of Options Like New Countries and Mission Risk

There are also tons of game options at your fingertips such as choosing to add six new countries which open up many of the continents, selecting how many reinforcements each continent supplies, three methods to select starting positions, and different winning conditions, such as World Domination (or at least a percentage of the world to shorten game time), Missions where you have to meet an objective like “conquer that country” or “kill that player”, and Capitals where you denote one of your territories as your capital and you have to gain control of a certain number of capitals to win the game. All of these add together to provide a new depth to the gameplay and new, interesting ways to experience this classic game.

While playing through there were some slight issues. For instance, while the LAN and hot seat multiplayer worked great, the internet support through MSN Zone was a bit difficult to use and had some connectivity issues. Also, the diplomacy system was a bit narrow with only a few options, you had to renew any alliances every round, and the computer very rarely agreed to any player proposed alliances. Finally, in Tournament mode there were no saves and if you lose one battle you are knocked out. While this did increase the tension and made each battle more interesting, it could get a bit frustrating if you get stuck and can't get past a certain round.

Conclusion - An Excellent Version of Risk

Yet, these minor issues pale in comparison to the addicting and enjoyable gameplay found in Risk II. The Classic mode is a great representation of the original board game and you don't have to deal with the hassle of game setup or keeping track of all the pieces and cards.

The new game modes and options let you experience refreshingly new twists to the gameplay and still retain the perfect balance of the original. Just give the demo a try and see how hard it is to put Risk II down once you're into the action. 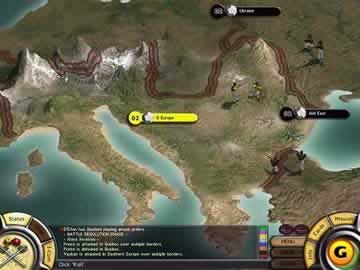 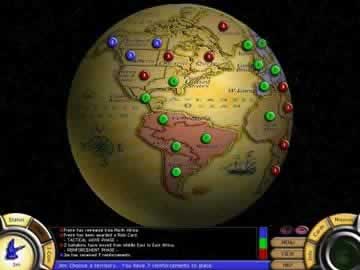