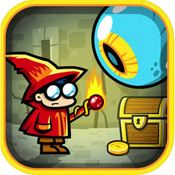 Defeat Your Enemies with the Power of Your Spells and Your Spelling!

If we've learned anything from playing games, it's that towers are meant to be climbed. The reasons why don't matter; they're tall and usually have something cool at the top. However, they also tend to be filled with all sorts of horrible monsters that make climbing them a little hard. Luckily, you happen to be a wizard talented in a very powerful school of magic. A school of magic where spells are cast through the simple act of spelling itself!

Spell for Your Life!

Hopefully you've dusted off the old lexicon. Spelling is the name of the game for Spellspire, metaphorically speaking, and every word you know could mean the difference between life and death.

Aim for the Top

Spellspire is simple, but it will put your vocabulary skills to the test in a way you never thought possible. If your brain is in need of some strenuous mental exercises that can go everywhere you go, download it to your phone now and spell your way to the top!

A Spelling Game in an RPG Skin

Spelling games have likely been around for as long as written language has existed, and role-playing games have been hovering here and there since the 1970s. For the longest time, that was it. They were two complete different beasts that appealed to different people, and there was no reason for them to ever meet. Then along came Spellspire, a spelling game that put on the guise of a fantasy RPG, or at least a loose parody of one. If that sounds strange to you, that's because it is. However, the real question to ask would be: is it fun? The short answer is that it has potential. As for the long answer, read on.

Spellspire doesn't waste time getting down to business. Taking control of a young bespectacled wizard, you immediately step into the tower and start ascending. Along the way, you encounter all manner of monsters that don't like the look of your face, and it's your job to destroy them before they destroy you. In true wizard fashion, you conquer your foes with magic, and in this particular game, you cast spells on them by literally spelling.

Each floor gives you 10 random letters. Every word that you're able to formulate from them translates into a bolt of energy fired from your wand, and the longer the word, the more powerful the attack. Enemies launch their own attacks at regular intervals, which makes it important to spell quickly, or else the only thing that will be spelled for you is death.

It sounds simple enough, but there's a good amount of strategy involved. While you may be tempted to throw every big word you know out, that's rarely ever a good idea. Some monsters are stronger than others, and there's often a really powerful mini-boss at the end who can really mess up your day if you let him. If you find a great word to use, it's better to save it for a tougher encounter while you use all the cheap three and four-letter words to clear out the trash. Words are like bullets in Spellspire; you only have so many to expend before they're all gone.

If Spellspire does something right, it's that it makes the simple act of spelling a word a really frantic affair. When facing off against a strong enemy, trying to find a word from your jumble can be real nerve-wracking. If you had time, perhaps you could find some really good zingers in there, but alas, time is not on your side, and every second you spend not throwing words up on the screen is one less second you have to live.

The app's word database is pretty good. If a word is in the dictionary, chances are it will be good enough to kill a goblin. Even vulgar words are no exception. Spellspire might not be family-friendly in that regard, but when a boss has you up against the wall, you probably won't care. However, when it comes to the names of people and places, Wordspire tends to be inconsistent. "Dan" might be a valid word, but "Meg" wasn't for whatever reason. Neither was "Nile" for that matter, and finding that out cost this critic a life.

Spelling may be the game's core mechanic, but there's not all there is to it. Spellspire does invoke RPG conventions after all. The tower is littered with all sorts of treasure to loot. Sometimes it comes in the form of a consumable item like a healing potions or ancient tome that will automatically spell out a long word for you. Other times, you'll get actual equipment that will make you more powerful.

Equipping your wizard is easy enough. There are only three things he uses: his wand for attacking, his robes for protection, and his hat for other things, and all of them can be upgraded with whatever money you pocket in the tower. Seeing your little guy get progressively more powerful is fun, especially since gear can do all sorts of things, like set enemies on fire or freeze them in ice. However, it's a bit one-dimensional. New items are always significantly stronger than even the fully-upgraded versions of the old stuff, so any attempt on the developers' part to add different strategic values to every item in the game falls flat. It's always better to just use the gear with the bigger numbers attached.

Can't Spell Your Way Out of This

However, that's not where Spellspire fails the hardest. That would be in how frustratingly tough it gets. While mowing through the rank-and-file enemies is fun enough, bosses more often than not tend to be really cheap. They're very durable, they can one-shot you, and luck plays a huge role in how you beat them. The letters you have to work with are always randomly generated; sometimes you'll get some very obvious words out of them, and other times you won't. The game does let you keep whatever loot you get on each failed run, and it is possible to replay older levels to grind for more money that can improve your gear, but it's never really much help. Your attacks just won't do much more damage, and your health will often still be too low to survive even one attack from them.

It doesn't help that death is real unforgiving since you only have so many lives to burn. Once you use them all up, you either have to put the game down and let them recharge, or break out the credit card and buy some more. That's just petty all around, especially since the app already tries to sell you a bunch of other stuff while forcing you to watch ads with alarming frequency. Spellspire just feels too greedy for its own good.

Conclusion: Okay for a Spell

As stated before, Spellspire has potential. The basic gameplay loop works and it can be pretty fun at the best of times. Unfortunately, it can be really unfair at other times, and the way the app tries to nickel and dime you really rubs the wrong way. 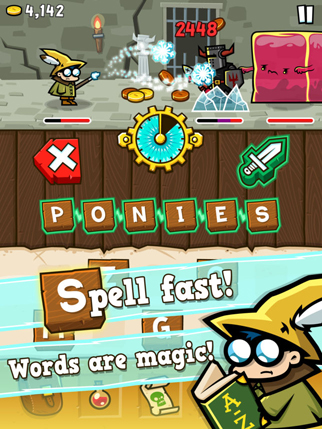 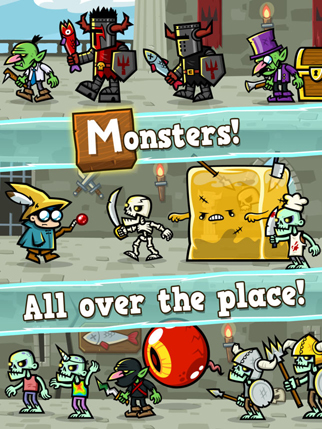