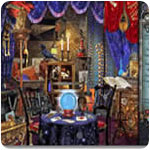 If You are Looking For a Mystery Puzzle Game That Challenges Your Eyes and Mind Rather Than Just Your Reflexes, This Is It!

An exciting new mystery to solve!

The Queen's priceless Hope diamond has been stolen and you've been called in to track the thief. Mystery Case Files: Prime Suspects is the sequel the smash hit Mystery Case Files Huntsville and offers more of the extremely fun clue finding detective work.

You must follow up on each of the leads from headquarters and track down the suspect to see if they really have an alibi at the time of the crime. Search each of the town's locations carefully, finding hidden objects located in each of the scenes.

A delight to the eyes and mind

Mystery Case Files Prime Suspects sends you to over 29 locations, each an artistic masterpiece of cleverly hidden clues and gorgeous presentation. Your mind and eyes will delight at the thoughtfulness and work put into each level.

Although this game has all the same fun gameplay as the original, there are a few new features. There are different puzzle games in the crime computer at the end of each level. Rather than just swapping scrambled picture tiles, you can now find hidden words or play a game of memory. There are also some new features in the regular levels like finding clues in a dark room using only a flashlight or using a magnifying glass that limits your view on some levels.

We offer Mystery Case Files Prime Suspects in a free demo download version which you can play for 1 hour with no strings attached. If you like the game and feel it is a good value, you can upgrade to the full version for a low price and get a high quality game loaded with fun!

Prime Suspects, the second release in the Mystery Case Files series, follows in the footsteps of its predecessor Huntsville by locating objects to solve a crime.

Offers a Bit More Variety Than the Typical HO Game

A combination of object location and puzzle completion allows you to solve the crimes that have been committed. Creative elements including darkened rooms explored with flashlights reinforce the crime solving theme.

Puzzles range from matching pictures to word puzzles and everything in between, adding some variety to the mix. Puzzles are placed at the end of each level to piece together the picture of the crime scene, but most of your time is spent locating objects. A map of over 30 distinct locations to search and a new crime at each offers hours of object hunting.

Conclusion - A Good Addition to the MCF Series

If you were a fan of the original Mystery Case Files, expect a very similar game structure with only a few new components such as a wider variety of puzzles to add originality. However, objects themselves are well-hidden and an abundance of locations presents an excellent challenge. 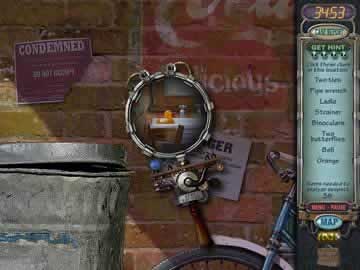 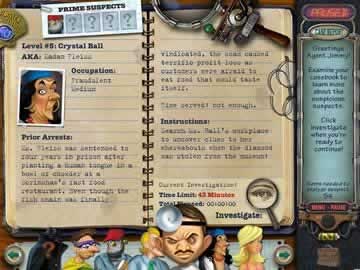