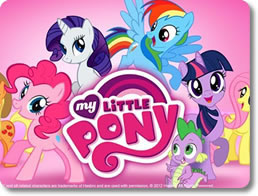 Are You A Fan of 'My Little Pony'? You'll Love This Game!

This fun game features many of the stars of My Little Pony, including the Mane Six. The art, music, and voice acting are true to the show. It also includes some of the popular recurring Ponies. Jeff Letrotski and Derpy Hooves even make appearances. Fans of all ages will enjoy the game.

Your goal is to help rebuild Ponyville. You'll do this by buying land, building houses, recruiting other Ponies, and creating businesses. There are 60 levels, which means there are plenty of Ponies to join you.

There are at least 50 Ponies you can earn in the game. Complete the different quests to earn more bits, shards, experience points, and sometimes even gems. Assign your Ponies to a job as soon as you can once they join you. You'll earn bits and sometimes Element Shards. Save up the bits for unlocking more Ponies, clearing land, and building homes and businesses. The Element Shards are used to reactivate the Harmony Stones.

Ponies might work hard in the stores to help earn Bits, but they love to play, too! You can help them earn more stars by playing Ball Bounce and Apple Picking.

Ball Bounce is a simple swipe game to bounce a ball between a Pony and you. Apple Picking is an easy touch game where you try to catch as many good apples as possible. You earn points towards stars each time you play. Check with Ponies often to see if the mini-games are available.

Every time a Pony earns a star, you can play Magic Wings. This mini-game gives your pony wings to fly through the air and collect clouds and bits. Try to collect as many as you can.

Gems are the premium currency in My Little Pony. You can earn some by playing the game. You can also purchase more in the Gameloft store. Hearts are the social currency. You can give and receive a heart from each friend, and you'll earn more hearts by interacting with people on your friends list.

Tap on every item you see around you. If you tap repeatedly on a tree, for instance, you can 'shake loose' a bit. Hay bales and stacks will also reward you with a bit. Once you've harvested all the bits in your viewing area, move on to another area and grab the bits there. You can come back to the first area and harvest bits again after a period of time.

If you see Parasprites, use an element shard to dispel them. This will earn you some bits and also allow you to have an open area to build another home or business in Ponyville.

Save Equestria from Nightmare Moon

In order to prevent Nightmare Moon from bringing darkness to all of Equestria, you'll help Ponies reactivate the Harmony Stones. Use element shards to restore all six of the Harmony Stones. This will spread friendship and light throughout the land and push out the darkness.

My Little Pony is an addictive game, especially for fans of the show. You'll enjoy meeting all your favorite Ponies and being part of rebuilding Ponyville. Join My Little Pony today and help save Equestria!

Based On the Hit TV Show

Nightmare Moon has unleashed everlasting darkness over Ponyville. It's up to you to help Twilight Sparkle and friends restore peace and harmony to the once tranquil land by collecting the Elements of Harmony.

Is this a game worth downloading for newcomers to the franchise and fans of the show alike? Read on to find out!

The game starts out with Ponyville in desperate need of restoration. There is really no town to speak of at the start of the game, and it's up to you to rebuild it. Buildings can be purchased and built wherever you want.

For fans of the series, having the opportunity to recreate Ponyville their way is a dream come true. For newcomers, having control over the geography of the town is a nice feature that makes it easier to make the town feel like your own.

The more buildings there are in Ponyville, the more there is to do. This is good because it gives players an incentive to build like crazy. In addition to building things, the game also gives you tasks to complete. This lends the city builder game some variation, and it keeps gameplay focused.

Once the town is bursting at the seams with friendly faces, it's time to expand. Each expansion costs something, but it's always worth it for the space and items contained in the newly reclaimed land.

The Elements of Harmony are another interesting thing to collect and accumulate during gameplay. While coins and gems help with purchasing things and upgrading the town, harmony shards are needed for completing the overarching quest to beat back Nightmare Moon and her darkness. Shards are hidden throughout the game, and they can also be purchased in the shop.

The town of Ponyville is rendered wonderfully in this game. Art and backgrounds are faithful to the popular television series, and this is sure to please fans of the show.

Surprisingly, the houses and ponies have a 3D element to them rather than looking flat like in the series. The result is amazingly smooth and colorful characters that stay true to the original concept while looking snappier and sharper. Animations and movements are flawless, and it's just fun to watch the ponies prance around the town and interact with each other. They really knocked it out of the park in the graphics department!

There is a lot of dialog in this game, and the voice-overs are performed by the actual actors from the show. Rather than coming up with a generic soundtrack for this game, Gameloft also wisely chose to use some of the well-known songs from the series. Fans of the show will find themselves humming along with their favorite tunes, and newcomers to the franchise will appreciate the well-made music.

Tons of Ponies to Collect

Fans of the series will be happy to note that this game includes tons of favorite characters from the series. At the time of this review, the game offers 50 different ponies to unlock and interact with. Every My Little Pony fan has their favorite pony, and it's nice to have such a wide variety of characters represented in this game. The ultimate goal of every player will be to collect them all!

The ponies aren't just for looks. They are your indispensable minions as well. Put them to work throughout the town and reap the rewards. The more you work them, the higher their individual work ranking becomes.

Friendship is Magic and Necessary

When you're social with your friends in this game, you'll be given hearts. Hearts are a special currency, and certain things can only be unlocked with hearts. If you don't have any friends playing this game, accumulating hearts could be a problem.

Fortunately, this game has wonderful social integration. It's easy to invite friends via email, Facebook or through a Gameloft account. You can even invite random strangers to be your neighbor if none of your contacts share your pony obsession. This game does social integration right.

As you play through this game, you'll start to notice that everything costs money, either in the form of gems or coins. Even the ponies cost money!

A frugal player will opt to pay coins rather than the real money gems, but coins are not very easy to earn at the start of the game. Plus, many things are only purchasable with gems. So if you're not willing to pay, you won't be able to win this game.

Theoretically, you have the option to save up the free daily gems until you can afford to purchase in-game expansions or minigames, but this makes the game incredibly slow. Buying gems is the only way to go if you want to play the game in a timely fashion.

Since this game is a city builder, lots of buildings will be constructed. The characters prompt players to feed them a gem so they can build things faster, and this ends up feeling like extortion. The game is frozen until buildings are finished, forcing players to watch the characters take their sweet time with the task. Children especially will have a difficult time restraining themselves from spending gems just to get the building process done and over with.

At the start of the game, you are given 4,000 coins, but the tutorial demands that you spend 1,000 of those coins right off the bat. No matter how you slice it, this game will have players pining to purchase gems.

The minigames in this game are fairly simplistic. This is good if you're looking for a more restive gameplay experience, but it's a disappointment for anyone looking for a challenge. Though easy, the games are bright, colorful and well-made. Overall, they're pretty fun despite the lack of difficulty.

One not so nice thing about the minigames is the fact that some of them can only be unlocked with gems that cost real money. The minigames aren't cheap, meaning that you'll probably have to fork over some real money to get the most out of this game.

Conclusion - A Bit Too Demanding For Real Money

This game is directed at players who have disposable income that they aren't afraid to spend on in-game items. The game is technically free, but paying is inevitable if you want to get the most out of this title.

Fans of My Little Pony will likely be willing to pay in order to collect their favorite characters, but for everyone else, this ends up being a very expensive take on the basic city builder game. Because of this, the game scores a 6.5. It's an excellent game marred by its own monetization model. 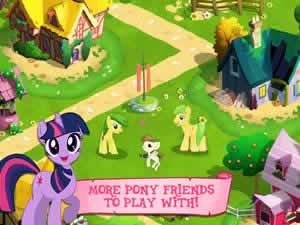 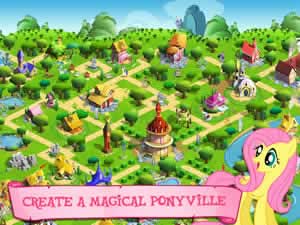