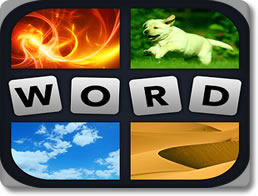 Find the Common Link that Binds the Four Pictures Together!

A Game of Categorization

We humans really love to categorize things. It’s just how our brains are wired. We have a separate family for all the various types of critters in the animal kingdom, we divide what we eat into four food groups, and we classify out digital games into genres. It may not seem like much, but dividing things into categories can actually be a lot more difficult than you would think. 4 Pics 1 Word will prove it.

Do you think you have what it takes to find the one word that describes what all the images you see have in common? Play it and find out!

What Do They All Have in Common?

4 Pics 1 Word is easy to play. You’ll be presented with four pictures. They may depict wildly different things, but they do have one very vital and very common link. It’s up to you to figure out what exactly it is. It’s pretty simple to grasp, but it’s amazing how absolutely hairy this game can get!

It’s inevitable. Play 4 Pics 1 Word enough and you will eventually come to a point where you just won’t be able rattle your brain for a correct answer, no matter much you look at the images or pour over the letters. It could very well even happen on the very first set of pictures you come across! Luckily, it’s not all that bad; 4 Pics 1 Word can help you narrow things down in several ways.

Hurry Up and Start Guessing!

4 Pics 1 Word is both one of the most simple and one of the most challenging games you will likely find for your smartphone or tablet computer in this day and age. There are no hard controls or nuanced mechanics to get a feel for; it’s all just looking, guessing and typing. Yet it will make you think long and hard over what four seemingly random things have in common.

There are plenty of ways to acquire clues just in case you get stuck, and there’s an added social element that will let you and your buddies lend a hand to each other. It’s easy to get into, absolutely addicting, and full of so much content that it’s unlikely you’ll ever see all there is to see!

A Strange and Simple Premise

Sometimes, you don't need a terribly deep or complex concept in order to have a good time. Sometimes, all it takes is something incredibly simple in execution. Nothing proves this better than the aptly-named 4 Pics 1 Word app.

It does not have action, it does not break genre conventions, it does not boast amazing graphics, and it has no story to tell whatsoever. Despite it all, this simple little game of mere categorization is probably going to be one of the most strangely addictive time-wasters to ever fit in the palm of your hand.

How does it pull it off? Read on and find out.

The premise behind 4 Pics 1 Word is so basic and simple, that the developers put it right there in the title. You'll be shown four images that appear completely different at a glance, but actually carry an individual similarity or theme that binds them together. What that theme is varies; you could be looking at four pictures that depict sport games, have birds in them, show off a lot of blue colors, and so on.

It sounds like it might be easy at first. In fact, the very beginning is. The game does an excellent job of reeling you in and getting you into the swing of things. However, the themes get progressively more obscure the longer you play. After a point, nothing will be obvious and you'll have to start thinking outside the box to find a category that fits.

Fortunately, you won't be shooting blindly. You also won't be struggling with any annoying parsers that will only accept specific words. That's because there's a bit of unscrambling to do. The word you need to look for has a specific number of letters that are clearly shown on screen, and you're given a limited jumble of letters to work with.

While it might limit your creative thinking, it helps to keep things focused and gives you another logical clue that will assist in finding the pictorial commonality. It also makes room for the game's rather creative hint system.

Neat Ways to Get Help

One of the more interesting things about 4 Pics 1 Word is how you can obtain more information whenever you get stumped. The app seems like it takes a few cues from the old Who Wants to be a Millionaire game show on this front. For instance, you can opt to eliminate some of the letters in the puzzle. You can also choose to have one of the letters in the answer be revealed to you. However, the coolest option is to ask your friends for help.

You do this by posting the troublesome puzzle to your Facebook account where your friends can see it for themselves. If you're lucky and they're smart, they just might be able to give you the answer. Like everything else about this game, this is a very simple idea that works amazingly well. It adds a nice element to the package without necessarily intruding on your progress.

With that in mind, it is kind of a shame that it's the only way players can interact with each other. It just seems like there's a fair amount of untapped potential here.

It should be noted that whatever form they're in, hints aren't a free "Get Out of Jail" card. They're a finite resource that needs to be used wisely.

As is the norm for freemium games, you need to earn coins to use anything and get anywhere in case you get stuck. Coins are generally earned by successfully solving puzzles or by purchasing them with real money. As long as you're willing to take time to solve some of the tougher cookies out there without abusing the hint system, then you should be able to enjoy 4 Pics 1 Word without having to pay anything. It won't be easy, but solving a real head-scratcher by yourself feels like a greater accomplishment.

A final note about the coins is that the game will also award you with 150 if you opt to give it a 5-star rating. While this tactic is nothing new, it's still as dishonest and underhanded as ever. Don't trust the user ratings; most of them have been effectively bribed.

At first glance, it might seem as though 4 Pics 1 Word randomizes its puzzles. In truth, it really doesn't to any great degree. There is a general rank of difficulty for the puzzles, but you're going to see the same ones in a roughly similar order if you play the game multiple times.

This may have been done to keep a steady difficulty curve, but it honestly makes it seem as though there aren't nearly as many puzzles as there should be. That's saying something, because there are well over 1000 sets of images for you to examine.

Furthermore, the detail that will likely make or break your decision to download this game is going to be how much you like Facebook. If you have a Facebook account or were planning on getting one, then there should be no problems. If you don't care for it, then you won't be able to play the game. The Facebook connectivity may be 4 Pics 1 Word's most interesting feature, but it's still unfair to force it upon people who would rather do without it.

Conclusion: In One Word, It's Fun

Despite some of the noticeable flaws, 4 Pics 1 Word is still an oddly addictive game. Identifying the common factor between the images makes for a good brain teaser. Solving a tough one all by yourself feels very rewarding, and there are going to be a lot of times where you'll feel like an idiot once you finally uncover the solution. The way you can look to your buddies for help is cool and pretty original too.

If you're on Facebook, then feel free to give 4 Pics 1 Word a try. It's a great way to exercise your brain for a short burst of time. 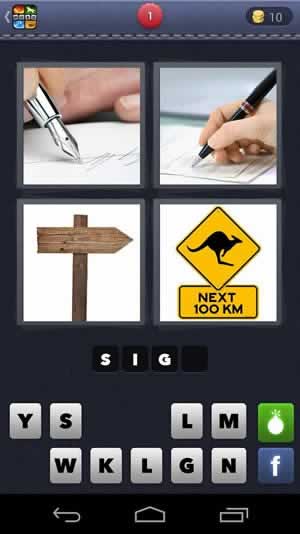 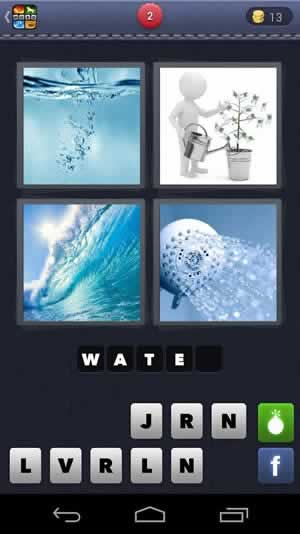