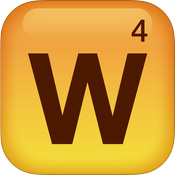 Test Your Vocabulary and Spelling Skills Against Other Players Anytime and Anywhere!

Spelling on the Go

Do you enjoy playing competitive spelling and word games? If so, then there is a new kid on the block that’s available for the mobile platform of your choice. In Words with Friends, you will get exactly what to expect; a word-spelling game that you can play with friends in an online environment. With an impressively-sized board, an extensive database of words, and plenty of free online communication tools to boot, you have a title that will not only eat up hours of your time, but maybe help you make some new friends as well.

Words with Friends is a simple game to get into and learn. You and another player are assigned seven random letter tiles. Every turn, you must place some of your tiles down onto the board in a way that will spell out a word in the English dictionary. Words can be formed from intersecting letters, creating the look of a crossword puzzle of sorts. Points are tallied up for each word spelled and whoever has the highest score at the end wins the game.

Get to Know Your Opponent

In some ways, Words with Friends is not just a game. Thanks to the communication tools it comes packaged with for free, it can just as easily be considered its own portable social network. With over 20 million copies in circulation, it’s a safe bet that you’ll never be alone in Words with Friends.

Words with Friends has been a worldwide sensation ever since its release and now that it’s in this new free package, there’s no reason why you can’t get in on it yourself. If you enjoy traditional word games, are quite the linguist yourself, and/or are friends with a lot of people who own one mobile device or another, then by all means get the game and spread the word to everyone you know. The only thing that’s more fun than spelling is spelling with friends after all.

Competitive Wordsmithing On the Go

Words With Friends is a popular word game designed with smartphones in mind. The similarity to Scrabble is impossible to ignore, especially for devotees to the classic word game. Does Words With Friends succeed in setting itself apart from other offerings in the word game genre? Read on to find out!

At first glance, Words With Friends is Scrabble in app form, but closer inspection reveals a few key differences that make this game unique. For starters, Words With Friends limits the amount of players to two per round, lending the game a more competitive atmosphere than word games played with larger groups. In this game, it's personal.

Words With Friends has also assigned its own unique point value to the letters, further differentiating itself from other word games. The bonus point tiles on the board are arranged in a pattern exclusive to this game as well, giving Words With Friends its characteristic gameplay. In short, Words With Friends is a distinctive title that will appeal to anyone who enjoys a good word game.

One of the Best Social Games Ever

Words With Friends was designed specifically for social gameplay, and it shows. Starting a round with a friend is quick and easy, and players are also given the option to search for people by username as well. In addition, it's possible to challenge complete strangers to a round of linguistic smackdown, which is handy when your own friends just aren't playing fast enough.

Words With Friends is a turn-based word game, which means that players make a move on the board at the time that's most convenient for them and then wait for their opponent to do the same. This makes the game easy to fit in any schedule. Even playing in different time zones isn't an issue with Words With Friends thanks to this ingenious structure.

This turn-based gameplay is rapid and fast paced when two players happen to be online at the same time, but if either player's attention is needed elsewhere, the round will be waiting for them when things quiet back down. This makes Words With Friends a game that's fun and easy to play no matter what.

The ingame chat is a great way to converse with both friends and strangers. It's simple to start a friendly conversation during a round of the game, and this also adds to the intensely social aspect of this title.

Surprising Amount of Strategy Hidden Within This Word Game

There is much more to Words With Friends than flaunting your vocabulary and playing the longest word possible. Paying close attention to where your opponent can play during their upcoming turn is crucial for success. Some moves might score you a few more points but set up your opponent for a double or triple word score. A far better strategy is to force your opponent to put you within reach of a bonus tile rather than the other way around.

As a result, the smaller words can pack a far greater punch than the longer ones. The exception is when a player can successfully unload all tiles in their hand in a single play, resulting in a bingo bonus of 35 points plus the point values of the tiles in the word.

There is always room for improvement in Words With Friends, and this makes it a game with endless replay value. No two rounds are exactly alike, and learning new words and techniques from your friends keeps the game fresh and exciting.

No Words Without Friends

There is absolutely no single player mode in this game. If you're away from an internet connection or if your friends aren't playing at the moment, there is nothing to do in the app at all. This means that players must be online to get their word game fix. Even a simple AI player for single player mode would have been a nice addition to this title. Words With Friends is definitely best played with real people, but it feels cheap to have no single player mode available at all.

Unlimited Time to Play Creates Opportunities for Stalemates and Frustration

During tabletop word games, there is a limit on how long a player can spend analyzing the board before making their move. Even if there is no official timer involved, the other players will only tolerate sitting idle for so long before calling it quits. This social pressure keeps traditional word games moving and eliminates the temptation to only play a perfect move.

In Words With Friends, there is no time limit. Some players use this to their advantage and start playing the game like a strategy sim rather than a casual word game. Not everyone wants to treat Words With Friends like a war, so this creates opportunities for frustration that can eventually ruin the game for casual players.

No Penalty For Submitting Incorrect Words

Words With Friends doesn't include a dictionary within the app, and this seems like a massive oversight until you realize that the game does nothing if players submit bogus, random words. It's possible to guess the most ridiculous letter combinations until something finally sticks. This method of spamming gibberish into the game provides players with little incentive to take the time to learn strange, obscure words for themselves, and this is a serious con for the intellectual players who happen to know words like mot, fud, gar or lac off the top of their heads. For them, this will be an annoying con.

On the flip side, this is also a pro for many players. If you have an ounce of curiosity in your nature, you will end up looking up the meaning of some of the strange new words deemed acceptable by the Words With Friends dictionary. It's a great way to expand your vocabulary, though it's not always easy to find a reason to use these words in day to day conversation.

Words With Friends is a fun social word game that anyone of any age will enjoy. The one-on-one aspect makes the game more intense and competitive than other words games, yet the turn-based style also makes Words With Friends a laid back game that unobtrusively fits into anyone's lifestyle or schedule.

Those who enjoy word games are guaranteed to be pleased by this title. Overall, it scores an 8.5. For many people, this game justifies the purchase of a smartphone! 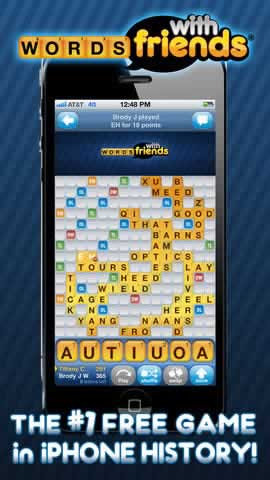 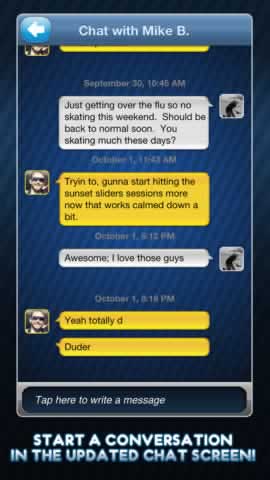