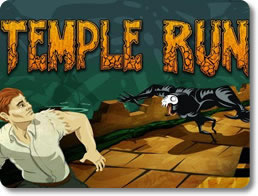 Run Through the Temple

Should you ever decide to explore some ancient ruins belonging to a civilization from a bygone era, there is only one thing that you really need to know: don’t pick up any mystical-looking idols that are neatly perched on otherwise innocent-looking pillars. Statistics show that they usually result in either the activation of a deadly trap or the release of an unholy temple guardian onto your grave-robbing behind. Unfortunately, you did not heed that rule and now have to run for your life from a horde of demonic monkeys.

Thus begins your adventure in Temple Run, one of the most fast-paced games you will likely every play on a smartphone. You must run, jump and slide your way through the winding mazes of the temple ruins at speeds that can only be described as ludicrous. If you succeed, you will most assuredly become a very wealthy person. If you fail, then you’ll end up as just another part of ancient history. Do you think you’re ready for that? Too bad; in Temple Run, you won’t have enough time to think it over!

The Chase is On!

They say that hindsight is always 20/20. It’s true; stealing that idol from the temple had to have been the stupidest decision you ever made. Sadly, there’s nothing you can do about right now aside from simply run. Those monkeys are hot on your heels and they won’t ever slow down. You won’t be able to either if you want to have any hope of getting out alive.

Being pursued by a troop of psychopathic simians might ruin your day, but you don’t need to rely on just your dexterity to see you through. Temple Run comes packed with a healthy dose of power-ups that you can use to improve your temple-running abilities tenfold for at least a few seconds. It may not sound like much, but in this world, one second can and will mean the difference between life and death.

There’s always a reason to come back to Temple Run. For a game that can be played on a screen so small, you will be surprised at how large it can be. This is a title that can surely be played again and again without ever once feeling repetitive.

With Temple Run, you get a unique and incredibly fast-paced game with a lot of replay value that can be taken anywhere and played anytime. However, the best part about it is that it is also now free. There’s no need to spend a cent to enjoy most of what Temple Run has to offer; this is one treasure that’s worth unearthing for anyone who’s curious.

Temple Run is an insanely popular game app, and the idea is pretty straightforward. Does this simple game manage to keep players busy for the long haul? Is this game an instant classic, or a mere fad? Read on to find out!

This game taps into one of the most basic animal instincts. It's only natural to get an adrenaline rush if you're being chased, and when angry demon monkeys are doing the pursuing, fighting really isn't an option. The only way to survive is to run for your life.

Running is simple and intuitive in this game, and easy to use controls allow players to really enter the zone during gameplay. Turning around corners, sliding under hanging objects and jumping over obstacles makes you feel like you're really running through a dangerous jungle. It's a blast.

As the game progresses, the running, dodging and turning speed up. At its fastest, Temple Run is a true test of the reflexes, making players move a mile a minute just to keep the runner out of danger. Don't blink!

Controls Made for the Touchscreen

Temple Run has controls that are built to make the most out of touchscreens. The runner is manipulated by simple slides and swipes on the screen. For example, swipe the screen left and the runner moves left. It just makes sense. The controls are sensitive without being too sensitive, and they are perfect for this game.

In addition to swiping, the runner may be moved by tilting the device. The resulting move is gentler than a hard swipe, but keeping control of the runner is harder when actually moving the device itself. If the runner bumps into the side, the monkeys are instantly nipping at your heels. Avoid bumping the sides for success!

The replay value of this game is extremely high, even after all characters and power-ups have been unlocked. Achieving a new high score is always a rush, and the rounds are short enough that the game can be played anywhere.

The game also offers a long list of objectives for players to achieve, if so inclined. Many of the objectives have witty names, and some are genuinely difficult to attain. They add a new dimension to this simple running game, and any true fan will put in the time to earn as many as possible.

The graphics in Temple Run are bright and crisp without producing any detectable lag, which is essential for this type of lightning fast game. The sound is also top-notch and clear, with epic sound effects and music reminiscent of an action movie.

This game keeps players on their toes by switching up the course each round, making memorization of tracks impossible. The randomly generated tracks give this game epic longevity, since it's never the same game twice.

With that said, the location itself never strays too far from the basic jungle setting, and this stalls any real sense of progression through the game. Having a change in scenery upon reaching a particularly high score would have been a nice touch. However, the sameness of the running tracks is not a deal breaker by any stretch.

There is nothing deep about the plot of Temple Run, but that's part of the charm of this title. You step into the shoes of a treasure hunter who has stolen a mystical idol. The demon monkeys guarding this idol really don't appreciate the fact that it has been stolen, and they will stop at nothing to get it back. Guide your adventurer to safety, or sit back and watch as the monkeys attack!

That's it for storyline. For some players, this will be a disappointment. However, with an open-ended, endless game, this simple setup is sufficient.

Spend Coins in the Shop

Nothing provides motivation to play more than unlockable items. As you run through the course, coins line the path. Collecting and earning these coins enables players to buy some of the sweet power-ups or characters in the shop. The power-ups in this game are extremely helpful, making them a great investment.

The power upgrades vary in price, and some of the better ones cost significantly more than the others, so careful saving and planning is suggested. It's better to level up the perfect power-up for your playing style before working to upgrade the rest. The following powers are available for upgrade:

In Temple Run, players spend a lot of time looking at their characters, so having another avatar option is nice. The default character choice is Guy Dangerous, but Temple Run also offers the following unlockable characters:

Unfortunately, the runners are different in looks alone. There is no difference in strength or speed between the characters, likely due to the amount of space that kind of programming would have added to the game. It's a disappointment, but collecting the characters is still an enjoyable challenge.

Temple Run is a runaway hit that has set records for app downloads. This game's success has set the standard for what a free game should be by combining addictive gameplay, great replay value and fantastic production. This is a solid game that delivers hours of quality entertainment. This title scores a 7.5. If you own a capable device, this game is a must play! 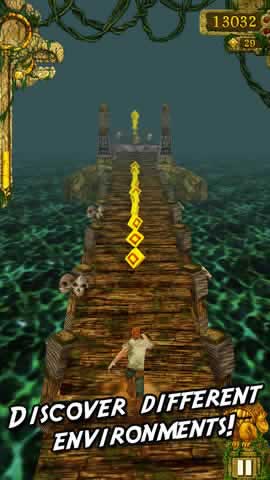 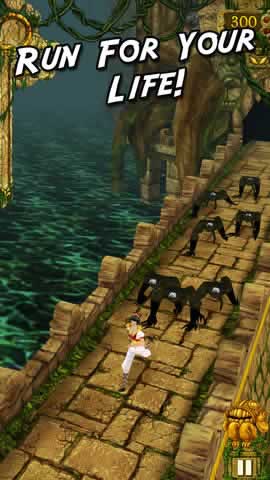