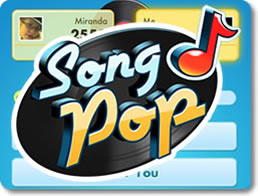 Challenge Your Friends to a Fast-Paced Game of Song Identification!

SongPop is an addictive game that pits your musical identification skills against those of your friends. Who will name the song first? Better act fast to win!  Speedy gameplay, catchy songs and excellent social integration make this a must-play game.

How well do you know your favorite songs? Can you recognize a beloved hit by hearing a few bars, or does it take a little longer? What about a song you’ve only heard a few times? This game will present a set of four possible song titles or artists along with a song clip. Your goal is to match the song clip with its song title. Time is of the essence though, because you need to pick the right song faster than your opponent to rack up the most points.

Speed is the essence of SongPop, but it’s important to take the time to make the correct choice. Acting reflexively might not yield the best results depending on the musical prowess of your opponent! If you guess wrong when they guess right, the other player will win.

A Variety of Musical Genres

What kind of music do you find pleasing to the ear? SongPop has playlists to please anyone, including Today’s Hits, Indie, Country, Latin, Hip-Hop, Classic Rock, Rap, Pop, decades and much more! Overall, the game provides over 300 genres for you and your opponents to choose from. Pick your faves and go head to head against your friends. Beware though; your friends are free to choose the playlists, too. To dominate in this game, it’s good to have a basic knowledge of all musical genres! Cultivate a diverse taste in music for absolute SongPop success!

The more you play and the better you do, the more goodies you can collect. Unlock special songs and playlists by earning a full 5 star rating on each playlist.

Play Against Your Friends or a Random Foe

It’s wonderful to go against your friends, proving to them the impressiveness of your musical memory. However, if you’ve won a few too many times and your friends are growing weary of competing, the game can match you with a random opponent, giving you more chances to name that tune faster than the rest!

SongPop is a treasure trove of music, making it a great resource for finding new songs and bands. If you’re constantly on the lookout for new favorites, SongPop is the game for you.

SongPop is totally free to play, though there are occasional ads in the free edition. Optional in-game purchases are also available. You can buy coins to unlock songs and playlists faster if desired, or you can earn up coins during gameplay and unlock these items more slowly. The choice is yours!

SongPop provides a tournament on a weekly basis, giving you the opportunity to compete with your friends in a tourney style battle for musical supremacy.

If we’ve learned one thing from the apps that end up as best sellers, we’re all about being social. SongPop is basically Name That Tune With Friends, pitting players against their buddies, family members, coworkers and even complete strangers in a competition to see who can guess the song first. Does this game deliver a worthwhile gameplay experience? Read on to find out!

How the Game Works

Have you ever challenged yourself to guess the title of a song? Have you ever heard only a small snippet of a song and then driven yourself crazy trying to remember the whole thing? That’s what SongPop is like, all the time. The game provides a song clip along with a set of four possible song titles. Your goal is to match the song clip with the song title. Sounds simple? It is!

However, there is challenge in the fact that you aren’t playing this game alone. Your opponent will face the same song clip and potential song titles too, and if they make the correct guess faster than you do, they will earn more points. At the end of the round, if their overall score is higher, they will defeat you. So your challenge is to pick the right song title, and pick it quickly.

SongPop pits you against your friends in a big way, and this is the defining gameplay mechanic that makes it a must-play. You will quickly find out who has the biggest musical knowledge of your buddies, and your friends will quickly discover your own unique musical quirks. Prepare to explain an encyclopedic knowledge of glam rock tunes or guilty pleasures of the 80’s to your friends. It’s all good though; you will be armed with the knowledge that they dominate the 80’s Cheesy Fun and Bubblegum Pop Classics playlists.

If you’ve beaten your friends a little too soundly and thus find yourself without anybody to play with, SongPop has you covered. The game will match you up with some random person to go head to head with, ensuring the fun never stops.

SongPop is pleasantly peppy to play, taking only seconds to boot up and get going. Select a playlist and try your luck guessing the songs. Win, lose or draw, each round is fast, making it easy to play round after round without even realizing how many you’ve started.

One might expect a game like SongPop to focus primarily on trendy music, teen music or Top 40, but SongPop is refreshingly diverse in their musical offerings. Sure, the latest hits, trends and teen heartthrobs are present, but so is everything else. And when I say “everything else,” I mean it. SongPop has Pop, Country, Rap, Hip-Hop, Rock, Latin, Indie (yes, even indies get love from this app), Latin Hits and more, along with oddball playlists such as Crooners, TV Show Themesongs and other surprising additions. Overall, there are over 300 playlists to choose from, ensuring that SongPop has a little bit of everything. This means that your favorite music is virtually guaranteed to be in the game, and it also boosts the challenge considerably. For instance, if a coworker of yours listens to a genre you don’t particularly care for, and they know it, it only makes strategic sense for them to choose that genre if possible.

The fact that the developers chose to pay serious attention to the music in their game and fully represent a variety of styles is a huge plus that broadens the appeal to include anybody who likes music.

SongPop is free to play. There is a paid version that gets rid of ads, but beyond that, SongPop is a game that you absolutely can play without paying a dime. The in-game currency is purchasable, and it makes unlocking new playlists and such faster, but if you’re willing to work for it, you can unlock all that stuff in due time.

One thing SongPop sometimes gets wrong is the titles that show up in their multiple choice options. If you didn’t know exactly what the song title was, you can often guess through a simple process of elimination. Many of the potential titles couldn’t possibly belong to a song that sounds like that (unless the band is really deep or intentionally contrary). How could the game improve this? There probably is no easy way to go about it. However, it does cut down on some of the challenge.

Let’s say you find yourself matched up with Nicole G of Rochester, NY. She’s a clever opponent, with a musical taste that’s very similar to yours. You love playing against her, until one day, the ping pong ball of back and forth rounds stops. The sad truth: you will never play against Nicole G again. The chances of the computer matching you two up again is practically nonexistent. A solution is to keep your games going no matter what, just to keep a good thing going when you find a likeminded player, but a friend’s list would be a logical feature here. Maybe even an in-game chat system, because why not? But sadly, this intrinsically social game dropped the ball in this regard. What a shame!

SongPop is not without its flaws, but even at that, the game shines as a genuinely fun way to pass the time. It doesn’t ask much of players in terms of time, yet it’s oh so easy to binge play this game. Music is pretty much a universal that all people appreciate in some way, and basing a game off of it is an effective way to make a game that appeals to the masses. Overall, this is a must download. Get it, play it, enjoy it! Addiction awaits! 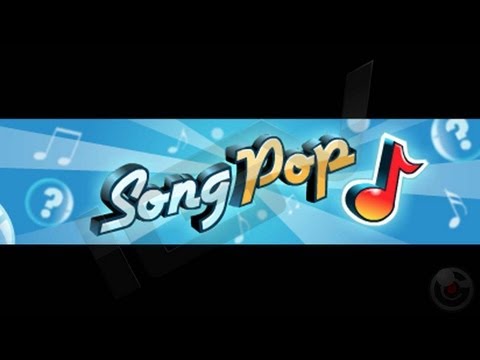 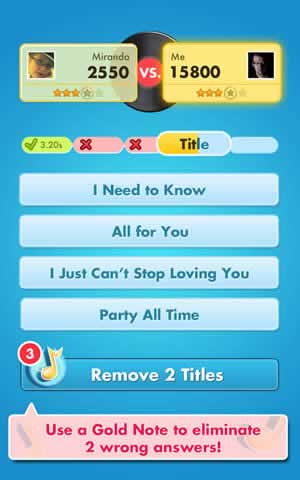 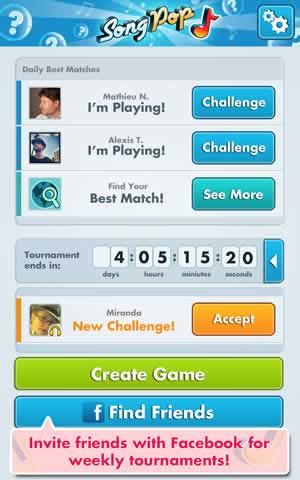