Ride, Capture, Wrangle and Display Wild Animals in Your Zoo! 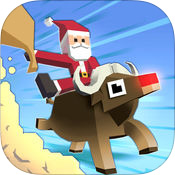 Howdy, buckaroos. The Sky Zoo Safari is just about ready to open. It's got most everything a good zoo should have: restrooms, ticket booths and gift shops. There's just one teensy little detail that needs to be settled before we can let the public inside: we don't have any animals! That's where you come in. By going out into the wilds, you can try wrangling a few critters until they're docile enough to want to settle down in captivity. It won't be easy; animals get mighty angry real quick, so unless you want to get trampled, you got to be as fast with your wits as you are with your whip.

You don't know the meaning of rodeo until you've tried it out in a stampede. Animals are ripe for the taking everywhere you go, and they don't take a cowpoke bouncing around on their backs too well, so prepare for a fight!

More Fun than a Bucking Bronco

If you're in the mood for a new flavor of endless runner, then look no further than Rodeo Stampede: Sky Zoo Safari. It's the fastest and wildest runner imaginable, and it's filled to the brim with unlimited replay potential. Take the bull by the horns and join the rodeo today!

A New Way to Run

Two things happen when a game genre becomes as crowded as the endless runner has. One, you get a whole bunch of interchangeable copycats that are impossible to distinguish from one another. Two, you get some rather weird attempts to stand out from them. Rodeo Stampede: Sky Zoo Safari is part of the latter group, but while it may sound like a bad thing, it really isn't. The app does a whole lot of funky stuff. Some things don't mesh as well as they should, but the things that do more than make up for it to create a very interesting and fun experience.

At a glance, Rodeo Stampede looks an awful lot like Crossy Road with its similar-looking cubic visuals. However, once you put it into your hands, you'll see it's a whole other beast. You control a cowboy who uses a lasso to hop onto assorted animals and ride them across various obstacle-ridden environments. You run forward as you do in most endless runners, and weave around hazards that threaten to send you into a dirt-nap. However, wild animals will be wild animals, and as such, they get angry when you stay perched on them for too long.

This is primarily where Rodeo Stampede differs from the competition. Any time you like, you can opt to leap off the current beast you're riding and get onto a new one. This will gain you some distance, buy some time, and can even help you avoid hazards you would have otherwise hit. There are a lot of critters to ride too, and they all have their own distinct properties and behavioral patterns. Elephants can charge through smaller animals with impunity, ostriches run really fast, and giraffes can propel you a long distance when you jump. Even the ways they act when they get aggravated are different. Buffalo will buck around to shake you off, ostriches run even faster, and lions will eat you on the spot.

Based on this, you would think it would be to your advantage to propel yourself from one critter to the next with impunity, but nothing could be farther from the truth. Every time you leap, your lasso shortens in reach, making future animal-wranglings harder to land. This means the most ideal course of action is to try and run as far as you can on a single animal, even if you have to brave its anger for a while. With all the different animals to take advantage of, their assorted states of anger, the defensive utility of jumping, and the hazardous environment, Rodeo Stampede is a surprisingly strategic runner that calls for a quick mind on top of fast reflexes.

It's a lot of fun to see in action as well, thanks to the neat Lego-like visuals and cartoony animations. The developers were well-aware of this too, for they even let you take photos of new animals you capture, letting you zoom in and pan the camera around so you can show off your new prize.

A Few Crashes and Burns

Unfortunately, the running aspect of the game can feel really wonky when compared to other runners, in no small part due to the controls. You need to keep a finger planted on the screen to stay on your animal, for releasing it causes your wrangler to leap off. This may sound fine on paper, but if you're playing on a small screen, chances are you may run out of space to move your finger, which will in turn prevent you from dodging some incoming obstacles or force you to make an inopportune jump just so you can safely re-center your finger on the screen. It gets frustrating.

Being a Zoo Tycoon

It's not everyday that an endless runner dabbles in the management simulator, but this is where Rodeo Stampede also differentiates itself from the rank-and-file. The premise behind the game is that you're running a zoo built on an airship of all places, and your wrangling adventures are all a means of securing animals to display. The zoo primarily serves as a means for you to make and spend money. Every now and then, you can open the place up to the public, which will draw in ticket sales, and you can in turn spend your earnings to improve the quality of your zoo.

In that, the zoo is largely an upgrade shop in disguise. Improving animal exhibits grants you all sorts of perks. These range from increasing your income on the managerial side of things to improving the quality of animals in the game's running aspect. The latter is interesting because it makes animals even more unique. For example, elephants can learn to smash through rocks and trees, zebras won't cut your lasso short, and ostriches can improve the quality of crates that you collect out in the field. You can also select which animal you want to start your runs with here, which makes the already strategic running game even deeper.

However, if you're hoping for an in-depth tycoon game, you're going to be left sorely disappointed. Outside of upgrading your ship and your exhibits, there's just not a whole lot to do in the zoo. There are no buildings to construct, no amenities to keep in mind, no expenses to pay off, and no means of drawing in crowds aside from improving your animal displays. It doesn't even look very good. The zoo serves its purpose and doesn't get in the way of the running game, but it still feels shallow.

Conclusion: It Roots and It Toots!

Rodeo Stampede: Sky Zoo Safari has potential to be one of the greats, but some problematic controls and a shallow tycoon game keep it from ever really getting that far. Fortunately, it's still a solid app that can keep you occupied for a long time, and the folks at Yodo1 Games deserve props for trying something new. If you're willing to put up with a few annoyances, then by all means, wrangle this app immediately. 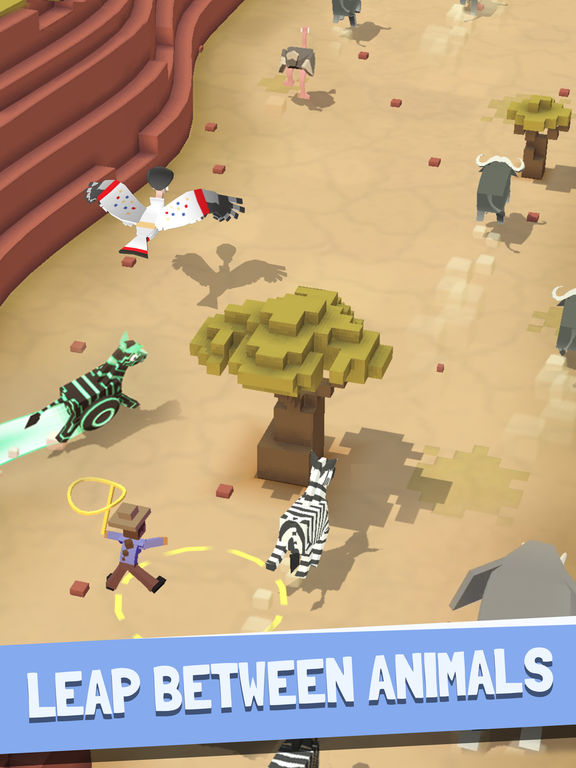 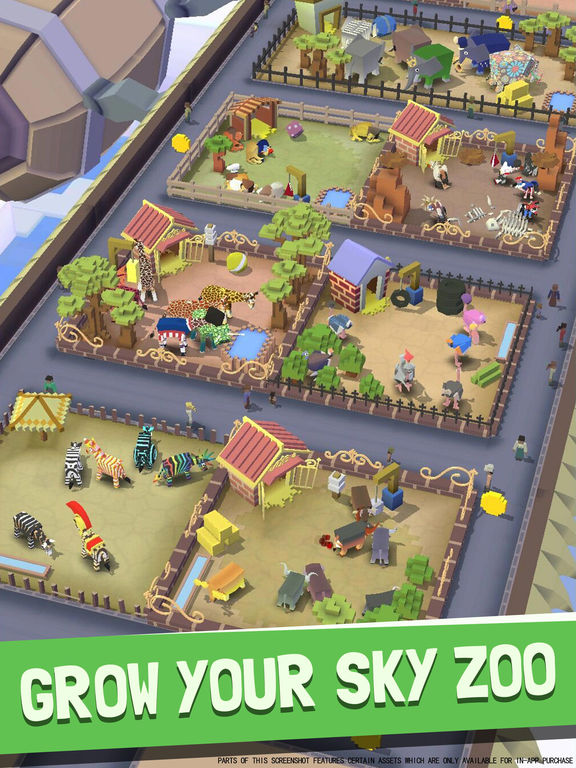