Home » Mobile Games » Kingdom of Camelot: Battle for the North

Only You Can Save the Kingdom from the Barbaric Picts 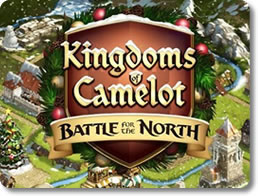 Step Into the Mythical World of King Arthur and Camelot!

Northern Britain has been overrun by the Picts, lead by Drust mac Erp. Queen Morgause, the widow of recently deceased King Lot of Lothian, calls upon Arthur, her half-brother, to help repel mac Erp's savage forces and save the kingdom. As one of Arthur's knights, you are responsible for doing so at the order of your liege.

What Is Kingdom of Camelot: Battle For the North?

Kingdom of Camelot: Battle for the North is best described as a free-to-play MMO Strategy game. During the game, you will conquer land and build your kingdom in an effort to repel the Picts. In addition to the main storyline, you will also have to contend with other players who are exploring the land and building their own kingdoms.

Although the game is free to play, there are additional purchases that can be made within the game itself, though these micro transactions are not necessary to enjoy the game. In addition, because of the massively multiplayer online features of the game, which include chat and competing with other players, the game requires a network connection in order to play.

At the beginning of the game, you are given a short tutorial by the Queen, who shows you the basics of the building, upgrading and questing system. You will also be introduced to the basic concepts of research.

After you are turned loose by the tutorial, you will find that you have some degree of customization. You can change your user name as well as the name of your city. As you progress through the game, you are given a series of Quests to complete. Some Quests are recommended, while others are optional. Completing a Quest gives you not only rewards in the form of various resources that can be used to upgrade your buildings, complete new types of buildings and train various types of units.

In addition to resources, you are granted experience points. Once you reach a certain amount of experience, your level increases and new items, buildings and types of quests are unlocked. While you initially start with a single city to manage, you will eventually be able to unlock additional cities as well. By gathering resources, you can grow and upgrade your own city. There are five types of resources:

As you gather resources, you can also train various army units, upgrade buildings and build new buildings. Similar to many other strategy games, the building and upgrading of buildings, research for new items and improvements and training of various types of units takes time. The more complicated or useful the building, upgrade, research or unit, the longer amount of time it takes to obtain what you are attempting.

Furthermore, at least in the beginning of the game, you can only build a single building at any one time. When you feel that you have built yourself up sufficiently, you can strike out to make moves against enemies.

Putting the Multiplayer in MMO

While you may choose to attack fellow players, you also have a more gentle option at your disposal. You can take the diplomatic route and form alliances with players. Of course, as with alliances in real life, its always possible that your ally will betray you. Thus, the game includes a strong political element which lead to bloodthirsty betrayals, strong rivalries and solid alliances as diplomatic relations rise and fall during the course of the game.

There are also an abundance of items available for use in the game. These items perform different functions, for example allowing you to reduce the amount of time it will take to build or upgrade a structure. These items add a layer of complexity to the game, and you are given only a limited number of use of each item you discover. Thanks to the inclusion of items, the end result of the game and how it is played is completely customizable by the player, allowing for no two players to have an identical experience.

One of the most important "items" in the game is known as Divine Inspiration. This item is so important because without it, you may not reach a level of 10 in anything such as a building without using Divine Inspiration.  Each day, a Merlin's Token is issued for free. This item, when used, gives you a chance to win an item in Merlin's Gift. Whether you win or not is determined randomly, and the item won is a rare item.

There are many types of troops within the game, and each type has their own strengths and weaknesses. Creating each type of troop also costs a certain number of resources.

Kabam Does It Again

The original Kingdom of Camelot was a fun and popular game. Kabam has set themselves up to surpass the fun factor of the original game with their newest offering in the Kingdoms of Camelot series of games. 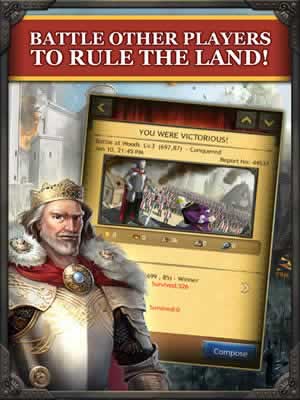