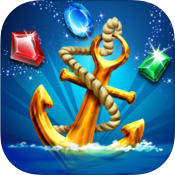 The ultimate Jewel-matching adventure is hitting the high seas

The famous jewel adventurers, Rupert and Emma are back... and unlike you have ever seen them before! After receiving a mysterious message from their old friend Hani, saying that the Jewel Boards were in danger, the duo must work fast to save both the jewel boards as well as Hani. But can they do both? Will they have to choose between the treasured Jewel Boards and their friend? And who is putting everyone in danger?

Dive into this exciting adventure by matching 3+ jewels as fast as you can. Jewel Quest: Seven Seas stays true to its roots - giving longtime Jewel Quest fans a 'pure' jewel matching experience while delighting new players with jewel swapping tricks unique to this beloved series of games. Exciting new elements include new jewels to match, new tools and power-ups as well a never-before seen Collapse-style mode!

With over 200 gameplay levels, this game give you days of jewel-matching fun!

The Quest Goes Ever On and On

It is often said that the journey is more important than the destination. Perhaps that is the reason why the Jewel Quest franchise has been going on for as long as it has with no sign of slowing down. After all, if the quest to match jewels is so engaging, then why should it ever end? Fortunately, while Jewel Quest: Seven Seas keeps the same basic match three formula, it adds a whole slew of new tricks to distinguish itself from the rest of the pack.

One thing that's always separated Jewel Quest from most match three games is that it's one of the few to feature an actual story, and Seven Seas is no different in that regard. Sadly, it's never really been anything memorable, and this latest offering is no different in that regard either. Series protagonists Rupert, Emma and their daughter, Natalie, are off on another adventure to investigate a new danger looming over the mystical Jewel Boards. If this is your first venture into the series, you're not likely to know what's going on. You're probably not going to care either, and neither are most longtime fans for that matter.

Fortunately, Jewel Quest has always been a lot better when it comes to its presentation. The background scenery for each level is drawn in lush detail, and the world map is even better in how it displays all of the various islands you'll be visiting across the campaign. Small details really bring it to life; rivers flow with a visible current, the waters of the ocean ripple soothingly, dark storm clouds flash with lightning, fiery embers flicker from the smoke that rises out of a volcano, and so on. It's a very pretty picture.

However, the real show-stealer in Jewel Quest: Seven Seas is the sound design. The soundtrack is an absolute joy to listen to, being equal parts epic and atmospheric, which is the last thing you would expect a simple match three puzzler to sound like. Sound effects are good too. While the chimes you'll frequently hear while swapping gems around are what you'd expect, the aforementioned map features some great ambience in how it features all the sounds we associate with the sea. Overall, Jewel Quest: Seven Seas looks, sounds and feels like properly polished product.

Being a long-runner, it's understandable to assume that Jewel Quest might be growing a little stale, but the good folks over at iWin made absolutely certain that would not be the case for Seven Seas. While it follows the tried-and-true match three formula that we all know and love, it does much to shake things up. For one thing, the app takes a page out of Candy Crush Saga in the way it encourages you to match more than three gems together to form power-ups. However, while King's series gives you a fairly large number of powers to use, Seven Seas instead opts for a smaller number of very flexible abilities.

At the core of it all is the ship wheel. Formed by grouping four matching gems together, this baby is going to be the key to solving almost every puzzle in the game. Swipe it in any direction of your choice, and it will clear out every gem in its path and turn those spaces on the board into gold. Any other ship wheels it collides with will in turn automatically set off in two directions perpendicular to it, destroying gems by the truckload and saving you some precious moves. Furthermore, ship wheels are the only way you can gain the Midas Touch, which allows you to crush any gem of your choice. Just send a wheel rolling into a gold coin, and the ability is yours.

The puzzle variety is quite sheer as well. A lot of the time, your goal is to turn every tile on the board into gold, but it's not always that simple. Sometimes, you have to do so within a limited number of turns, while other levels will call for you to do so under a limited amount of time. There are other goals to meet as well. For instance, you'll sometimes be tasked with ringing bells, and the only way to ring them is to ram them using the always-dependable ship wheel. More often than not, you'll have to meet several goals at once, such as ringing five bells and turning every tile into gold within two minutes. The match three genre isn't known for making you juggle so many things at once, so it can get pretty hectic at times. It's also a lot of fun.

Comparisons to Candy Crush Saga are inevitable, but one thing that Jewel Quest: Seven Seas has over it is that while it can still get harrowing at times, the difficulty tends to feel a lot more fair. While the level of challenge in King's games can typically zigzag, with an unreasonably hard level being followed up by an absolute cakewalk, things tend to rise at a steadier pace in Seven Seas. Furthermore, even if you do hit a roadblock, you're free to try as many times as you like; there are no limited lives or energy meters to worry about. While that sounds nice, the trade-off is that the app isn't free. You can play the first dozen levels without paying a cent, but everything else needs to be bought. There's nothing wrong with that; it's just something to keep in mind for the budget-conscious.

Not All That Glitters is Gold

If there is one thing that drags the experience down somewhat, it's how small the grid can potentially be. If you're playing on PC or using a device with a decently-sized screen, this won't be a problem, but it will be on your typical smartphone. The screen space is just not used to good effect; most grids typically only take up about a third of the screen, with empty space governing the rest. As nice as the backgrounds are, better use of the real estate would have been preferable. Furthermore, you'll have to be extra careful with how you move your finger, because it's not unusual to accidentally swap some gems you didn't mean to, or to send a wheel veering off into a direction you never intended it to go. The game is still playable and will follow your desires most of the time, but these kinds of errors happen enough to be noticeable.

Conclusion: A Voyage Worth Sailing

Jewel Quest: Seven Seas isn't a perfect game, but it's still a very solid one. It's got the same basic match three gameplay that made its predecessors so beloved, but adds enough twists and turns to make it feel like something brand new. In other words, it is everything a good sequel should be, and is what every Jewel Quest fan has been waiting for all these years. 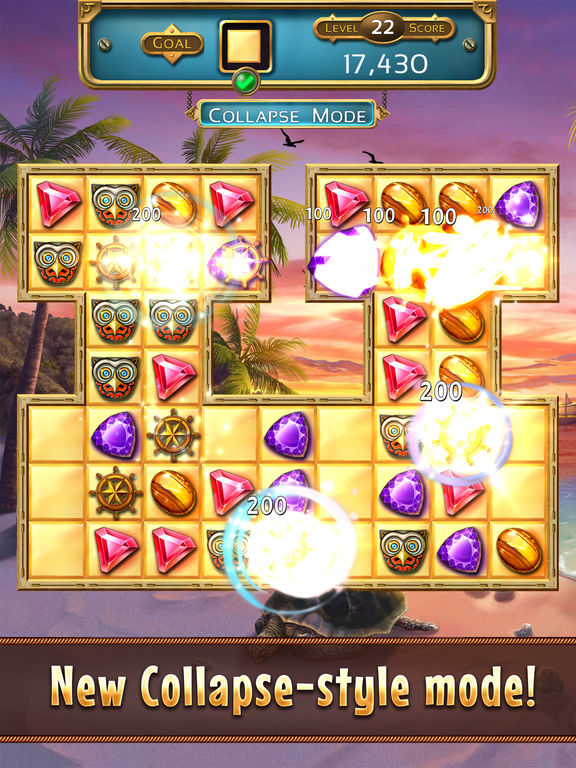 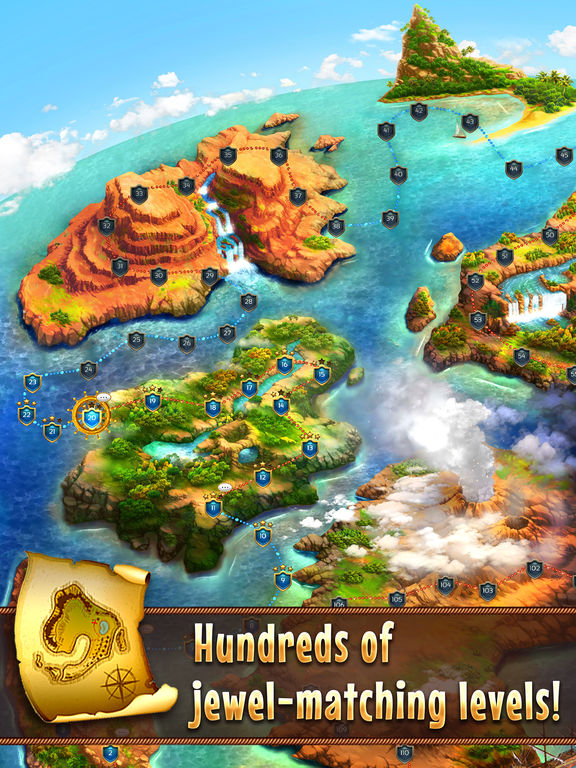