Play Fast and Play to Win! 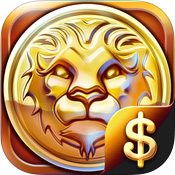 Match-3 puzzle games are (and have been) everywhere. So, how do you spice up something that's been done a whole lot in all sorts of ways? You play for cash prizes, of course.

Jewel Quest for Cash is a familiar style of match-3 puzzle game where you need to line up like-colored jewels in order to clear them and change background tiles from bland to shiny gold. Once the entire board is gold, or the time limit runs out, you're done and it's on to the final score comparison. If you earn more points than your opponent, you win the pot!

Depending on the game type, you'll be competing for the tokens needed to play 'practice' games, or for actual money. No pressure. Thankfully every single game you play, win or lose, will earn you tickets that can be redeemed (eventually) for more cash. Or you can spend some of your own money if you'd rather not wait.

Your score is all that matters, and the best way to maximize it is to clear the board as quickly as humanly possible.

No matter how good you might be at match-3 puzzles, you'll want to cut your teeth on the practice mode first. This game type is played with tokens instead of real money, so there's far less on the line as you familiarize yourself with the particulars.

More of Sort of the Same

Jewel Quest for Cash is an interesting spin on a somewhat uninteresting - or at least oversaturated - genre. The jewel matching itself probably won't blow your mind, but the added intensity of playing against other people, on a timer, and possibly for real money, definitely spices things up a bit.

A Familiar but Slightly Different Puzzle

If you've been playing mobile games regularly for any interval of time, there's a good chance you've played something at least a little similar to Jewel Quest for Cash. It's a match-3 puzzle game where you have to connect three or more jewels of the same color in a horizontal or vertical line in order to clear them from the board - and subsequently change the board's tiles to gold in the process. Once the entire board is gold, or you run out of time, you're done.

This is undoubtedly a very familiar concept to most mobile gamers, however there are a couple of big differences in this case: you have to play fast, and you're competing with another player's score. For money. Kind of.

The competition is the thing in Jewel Quest for Cash. Without it, it would just be another featureless match-3 game lost in a sea of 'me too's. Cynical though that may sound.

Honestly though, the infusion of an extremely short timer and a rival player to try and best do make a difference. The need to move quickly in order to maximize your score adds a surprising level of excitement to each match, and the knowledge that you're up against another person pushes that urgency even further. Throw in digital winnings - either tokens that you need to enter 'practice' games or real money - and things can get quite intense.

Coming out ahead once the round is over is a great feeling, whether it's by a few hundred points or several thousand. Conversely, losing can be quite irksome, but it's more the 'get back in there and WIN' kind of irritation. It's just a shame that you don't earn quite as much (proportionally) from cash games as you do in games where you use tokens.

Not for the Paranoid

I also have to give Jewel Quest for Cash credit in how fast matches are found and started. You simply pick a game type, wait a few seconds while it tries to find an opponent, then jump right in. Even if it can't find an opponent right away you can still finish the puzzle, then it'll find someone to match with you later and compare scores asynchronously.

What I'm not terribly fond of is how I need to sign up with an email in order to save account information - and to use the same account across other games that use the 'Skillz' (ugh) system. I mean I understand why, because if you ever play for cash and want to collect there needs to be some form of verification, but I don't like giving my info to unfamiliar places. I'm also not too keen on the need to use my device's location, though again, it's kind of a necessity. Doesn't mean I have to like it.

If you have qualms about gambling (though it's technically possible to play without spending any money so long as you're extremely patient), Jewel Quest for Cash probably won't change your mind. Ditto if you have an aversion to singing up for things. However, I do have to admit that the competitive nature of it all does keep things somewhat interesting. Although truth be told, if the one-on-one versus play for (potential) cash prizes wasn't there, it would be a fairly unremarkable match-3 puzzle game. 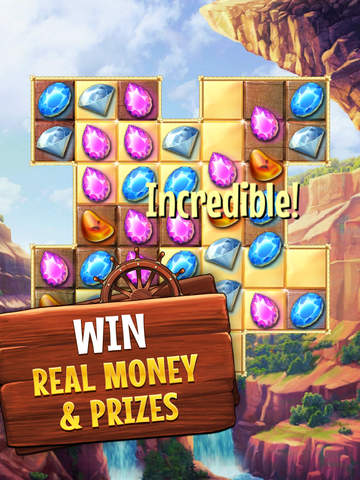 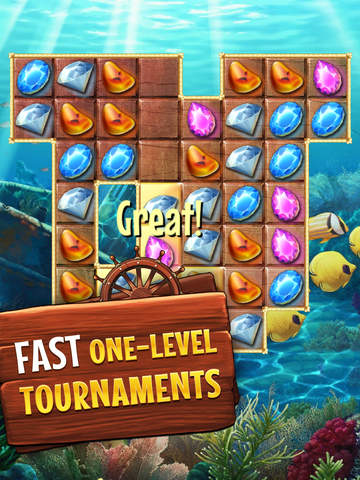