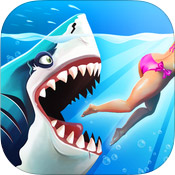 Swim Through the Ocean, Meet Interesting and Unusual Creatures, and Eat Them!

If there is one animal you don't want to meet face to face with on this blue planet we call home, it's the shark. Nobody messes with sharks for good reason. They're big, have rows and rows of razor sharp teeth, and their thirst for blood is impossible to quench. Heck, they've even outlived the cataclysm that wiped out the dinosaurs! With so much raw power packed into their sleek bodies, could you imagine how cool it would be to actually live as a shark for a little while? With Hungry Shark World, you finally can! Show the animal kingdom what it means to be an apex predator as you eat everything that comes within biting distance.

The little fish exist to be eaten by the big fish. That's the law of the jungle, or ocean in this case. As a certified man-eater, you're the biggest fish out there, so do your civic duty and devour everything that moves.

Get Hungry for More

No matter how big a fish you are, there's always an even bigger one just waiting around the corner. Therefore, you need to get bigger than them first! Hone your predatory instincts and defend your place at the top of the food chain.

The World is Your Tasty Oyster!

The hunt provides a thrill like no other, and Hungry Shark World proves it by letting you take control of the most fearsome beasts to ever prowl the ocean. If you have yet to taste blood, or couldn't get enough of it from Hungry Shark Evolution, then return to the ocean once more with nature's deadliest predators, and let the hunt commence!

Ladies and gentlemen, it has come to our attention that sharks are not getting the proper representation they deserve in the world of computer games. We can all agree that they are by far some of the coolest animals on Earth on account of being big, scary and efficient killers that have been around since the time of the dinosaurs. We can also agree that those qualities make them admirable enemies to fight. However, fighting sharks is old hat; how often do we get a chance to actually be a shark? Something called 'Jaws Unleashed' was released in 2006 in an attempt to scratch that itch, but everybody today would probably prefer to forget about that noise.

Fortunately, the good folks over at Future Games of London heeded the call and have produced Hungry Shark World. Now all of us can see what it's like to be a perpetually hungry underwater killing machine! All right, maybe that's exaggerating things, but being a shark is still great fun, assuming you're able to get by a few technological hurdles and have the patience of a saint.

Hunt and be Hunted

The rules of Hungry Shark World are simple: eat or be eaten. Your job is to swim around the ocean, eat everything that you can find, and stay alive for as long as possible. That might sound easy to pull off, but don't be fooled; just because you inhabit the upper echelons of the food chain doesn't mean you can't be killed. Jellyfish pack a painful sting, lionfish are poisonous to eat, barrels of toxic waste will make you sick if you get too close, and other sharks are ready to make a meal out of you. Not only that, but your health is constantly ebbing away, forcing you to always be on the prowl.

It's a simple formula that's pretty common in mobile games like Agar.io, but it differs from them in that it puts a stronger emphasis on exploration. The maps you swim through are pretty large and expansive, filled with all manner of secrets like treasure chests to unlock and different critters to eat. The latter point is especially important when we take missions into account, since these often involve you eating certain types of prey. Hungry Shark World definitely isn't lacking in variety; the many things you can eat include tropical fish, sea turtles, cuttlefish, crabs, birds, divers and beachgoers. Knowing where they spawn is vital to completing your missions, which will add a significant bulk to your experience and gold reserves, both of which are needed to unlock more stuff.

Exploring is also risky because you simply won't be able to eat everything you encounter. Other sharks are going to be your most significant foes, since unlike everything else, they're highly aggressive. You'll want to avoid their waters if you can help it, but sometimes you just have to take the risk and work around them. Once you acquire some bigger sharks that are capable of eating them, you can begin expanding your horizons, hunting in more lucrative waters and turning the tables on your former predators. Overall, hunting, eating and exploring in Hungry Shark World is an enjoyable and, at times, even tense experience.

It helps that the levels are not only well-designed, they look amazing too. Everything is bright, colorful, detailed, lively and made to feel like a real place. You'll swim through underwater tunnels, explore sunken ships, beach yourself on sandy shores, and weave around inedible pieces of garbage caused by human carelessness. The characters also look good; there's a fantastic variety of undersea fauna, ranging from tiny little octopuses to giant humpback whales that dwarf most of your sharks.

However, it's the sharks that steal the show. While they're by no means cute and cuddly, they are nevertheless depicted in a charming and cartoony way that's pretty reminiscent of the sharks in Pixar's 'Finding Nemo.' While most of them are based off of real species like the tiger shark, hammerhead, goblin shark, and the infamous White Death itself, their features are exaggerated and they make some of the most comical facial expressions you could imagine. Seeing them in action is a load of fun.

That last part is especially important because in a game that's all about violently ripping living things to pieces, you need all the laughs you can get. While devouring sea life is a pretty clinical affair, Hungry Shark World goes for full-on black comedy wherever humans come up. When left to their own devices, they talk and act like typical airheaded valley girls and surfer dudes. Then they start panicking once they see you, only to scream hilariously as your shark starts chomping on them. It sounds morbid, but the intentionally goofy voices and the sharks' manic animations ensure it never feels serious.

Not as Fluid as It Looks

Sadly, the graphical fidelity comes at a cost. A game that looks this good needs some decent specs to run, and if your device isn't up to the task, you're going to have some problems. Load times are often pretty lengthy, which is irritating, and drops in the frame rate are liable to get you unfairly killed. While you can revive yourself for free a couple of times if you choose to watch an ad, it's still annoying when it happens.

Speaking of getting killed, the controls could really use some fine-tuning. Hungry Shark World is controlled by a roaming joystick of sorts on your touchscreen; as long as you've got a finger pressed down on the screen, you can move your shark wherever you like. It's decent, but it's not very precise at all, and precision is very important in a game where you typically have to avoid hazards like volcanic geysers, clouds of poison and inedible fish. Trying to kill sharks in particular is very difficult due to their extreme aggression and erratic swimming patterns.

However, the biggest problem with Hungry Shark World is that it's, simply put, a grind. You start off with a little weenie shark on a single map, and have to level him up and accrue a wealth of gold to unlock the bigger fish, more exotic worlds, and other accessories that grant additional bonuses when equipped. Let's just say it's going to be a while before you can get into the fins of the great white shark, unless you decide to cough up the ridiculous sum of money needed to unlock him. The app thankfully does nothing to limit your playtime, but it's questionable if you'll really want to play it long enough to access the more interesting stuff.

Despite its issues, Hungry Shark World is still a fun romp for what it is. It's gorgeous, it's stylish, it's funny, and let's face it: playing as a shark is always cool. It's even better if you can equip that shark with a laser gun, which you can totally do! If that sounds neat to you, then the app is definitely worth a try. 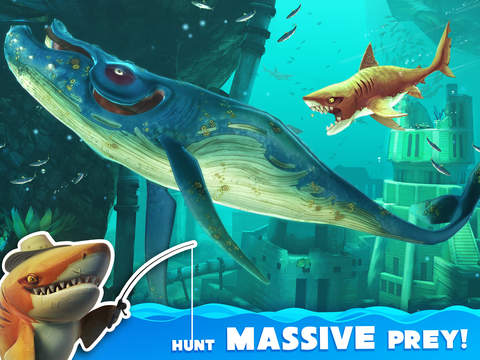 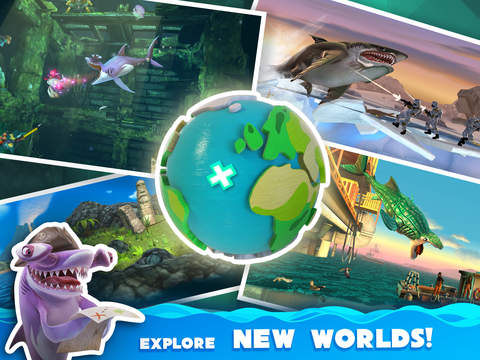