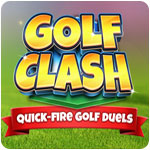 Time to Hit the Course

Just because it's raining outside is no reason you can't hit the course today. You can go golfing wherever and whenever you like in fact, as long as you have the Golf Clash app on your phone! Many eager competitors are waiting for you right there on the green, and all you need to do to challenge them is dust off the old clubs and start teeing up.

A Game for the Champions

Everything you know and love about golfing is here. It's got the greenery, the holes, the sand traps, and most of all, it's got the challenge, the tension and the thrill.

A Hole in One

Without a doubt, Playdemic has a created a winner. This app is a dream come true for golfers and aspiring golfers everywhere, giving everyone a chance to experience all there is to experience about the sport without the need for a caddie, a set of clubs, or balls for that matter. Just put it on you're phone and start swinging! Fore!

A New Way to Play a Classic Game

Golfing can be a lot of fun, but it's a ludicrously expensive sport that not just anyone can pick up and play. Needless to say, it was only inevitable that an app simulating it would eventually be made. That app is Golf Clash, which is notable in that it emphasizes player versus player gameplay. For the most part, the mechanics are solid enough to set the foundation for what could have been a very good mobile game. Unfortunately, even though you can download the game for free, there are still some steep prices to pay that make it questionable if it's even worth it.

Looks Quite Lovely, Doesn't It?

One thing that cannot be understated about this game is how utterly gorgeous it is. The people at Playdemic obviously sought to make this as authentic a golfing experience as they could, and for the most part, they've succeeded. While the graphics won't hold a candle to the average AAA console or PC game, they are still very crisp and pleasant to look at. Many lovely shades of green are put to good use to allow you to tell what part of the course is the roughage, what is the fringe, what is the green itself, and what is clearly out of bounds, and there's usually some accompanying scenery to go with the course to make it look and feel all the more authentic.

However, what makes the game a real thrill to play is how it portrays the action. Every drive, put and hit you make will switch the camera to a cinematic view that highlights the ball's movement in the air and on the course from multiple angles, much like how you would expect a televised showing of a round to look on TV. The movement is fluid and the physics are realistic, and successful actions on your part will always be accompanied by that distinct light applause we all attribute to golfing, which further reinforces how this game feels like a championship match in action. Playdemic boasts a lot of aficionados for the sport and it shows.

The Next Best Thing

It controls like a dream too. Getting the ball to where you want it to go is simple and intuitive. First, you designate the area on the map you want to aim for, then you pull your finger back from the ball and release it when the time is right. How far you pull back determines how much force you put into your swing, and there are other factors to consider too, such as which way the wind is blowing, what kind of terrain you're situated on, what kind of terrain the ball will land on, what type of club you're using, and its overall quality. It all combines to form a game that's easy on the outset, but requires you to carefully weigh your options to yield the best possible results. It may be no substitute for swinging a club for real, but for the purposes of a mobile app, this game does tremendously well.

Almost as Pricey as the Real Thing

Unfortunately, while skill and personal judgment play a role in your performance, it's ultimately going to be the statistics of your golfing equipment that have the biggest say in the quality of your game. This may sound harmless enough, but being as this is a game that's primarily all about going to battle against other players, it becomes quickly apparent that whoever has bought the best gear will win. That alone should warn you that this is very much a pay-to-win game.

Don't think about getting better just by grinding either. Golfing for just a single round will cost you some of your hard-earned in-game dough, and entering the higher tours that offer the greater payouts gets exorbitantly expensive. Every round you lose represents a loss of money you won't get back, and being as you'll largely come across people who have caught on to this and spent through the nose to ensure they stay at the top, it's nigh impossible to stay competitive unless you open up your own wallet and start throwing money at the app yourself. The built-in matchmaker doesn't have any way of distinguishing higher-ranked players from lower-ranked ones either, which only ensures you'll go bankrupt that much quicker.

It stinks that Playdemic took this route, because this app has the potential to be one of the very best golfing sims available for mobile phones. The controls are solid, the presentation is spot-on, it's very strategic, and playing against another player is a tense and competitive affair, provided they have the same stats as you. Unfortunately, the gross nickel-and diming diminishes the quality of this product. If you want a golfing simulator, look elsewhere; this one is well under par, and not in the good way. 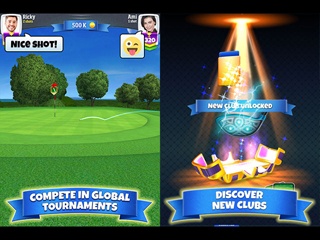 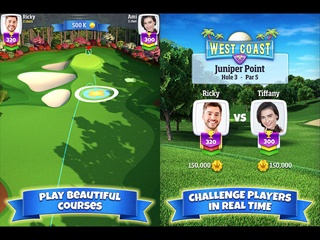