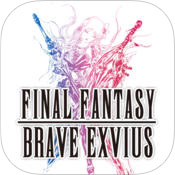 A mysterious man in stylishly imposing armor has destroyed a magical crystal, plunging the world into chaos. Monsters have become bolder, serene villages are being attacked, and of course there's also a war going on. Things aren't looking good.

Final Fantasy Brave Exvius follows protagonists Rain and Lasswell as they find themselves drawn into an insidious plot to destroy the planet. They won't be fighting alone, however. They'll use newfound powers to summon skilled warriors to their aid. Call upon history's greatest heroes, create a team of your favorite Final Fantasy characters, and fight back against the darkness.

The More the Merrier

Rain and Lasswell aren't going to cut it alone. To truly stop evil in its tracks, they're going to need a lot of help. Use Lapis, summon tickets, and friendships forged with other players to summon more heroes to add to your ranks.

Fight for the Future

Calling upon heroes from across the series won't make things much easier. Keep leveling-up your team, giving them better equipment, and putting their special abilities to good use.

More of the Bravest

Square Enix has been refining their 'Play every Final Fantasy character' formula, and Final Fantasy Brave Exvius is their most solid attempt yet. Combat is simplified but involved, it looks retro-inspired but still very nicely detailed, and seeing your favorite characters from different games fight side-by-side never gets old.

The 'mix them all in a big jug' approach to series crossovers is a fad that's been spreading through licensed mobile games for a while now. It's also a fad that I'm okay with, because it's pretty darn cool for nerdy fans like myself. Sure there have been missteps along the way, especially for Square Enix, but Final Fantasy Brave Exvius is an impressive refinement of the concept.

Earlier releases used an almost Super Nintendo-looking aesthetic for their characters. It made for a cohesive look, and it was kind of cool to see heroes like Final Fantasy VII's Cloud or Final Fantasy XIII's Lightning in 16-bit. Now things have started to shift in the opposite direction, and the results are kind of spectacular.

The 16-bit style is out; instead, Final Fantasy Brave Exvius has settled somewhere around 32-bit, with character and enemy designs significantly improved across the board. The cohesive visuals ensure that the crossover doesn't seem out of place, but I can't stress enough just how good everyone looks in this art style. It calls to mind some of the best Playstation era sprite work, with some really cool animations and attack effects to boot.

Teams may be capped at five members, but they can come from almost anywhere in the series. Not only does this mean you can create some pretty wild looking combinations - my current team includes people from Final Fantasy 3, 6, and 12 - but you also have quite a few options when it comes to abilities.

There will be overlap - especially when it comes to magic skills. However, each character has slightly different stats and a slightly different assortment of abilities. Two heroes might have Cure, but one of them could also have Poisona while the other can cast Bio.

The interplay of the different character abilities in your party, as well as their inherent skills makes Final Fantasy Brave Exvius feel almost limitless. You can design a versatile team, capitalize on shared magic attacks to create special elemental combo chains, and so on. It's also possible to save several team setups at once, and switch between them before entering an area.

Kicking evil in the derriere is pretty simple, but there's also a little bit of nuance to it. Tapping on a hero's name will cause them to attack, while tapping on several in succession will send them all charging forward. Landing several hits in a row on a single enemy creates a combo, and higher combos means more damage - as does chaining together successive attacks that use the same element.

You can also select different attacks for different characters by swiping across their name. Up is a default strike, down will defend, right allows them to use items, and left pulls up their special abilities and magic attacks. These commands can be set before the attack commences, so it's entirely possible to chain special attacks together in a combo for some serious hurt. All of this comes together to create a combat system that's extremely easy to get into, but complex enough to keep you invested.

Unfortunately there are some issues with this setup, namely with the swipe controls. First off, if you don't tap the screen just right, it'll likely register as a swipe. This is a minor annoyance most of the time, however the confusion will often lead to a break in combo attacks, which results in dealing less damage. Another unexpected problem I've encountered is that answering texts or phone calls and then going back to the game will make the swipe controls simply not work. You can still tap to attack normally, but no amount of swiping will allow you to select new commands. Not until you restart the game, anyway.

What's in a Name?

Square Enix's naming conventions for their mobile games have been getting more and more esoteric (seriously, 'Brave Exvius?'), but don't let that discourage you. Behind the weird title is a pretty darn cool freemium RPG. The cast is huge and varied, and the enemies and characters all look fantastic. There might just be something to this 'fanfiction reenactment' sub-genre. 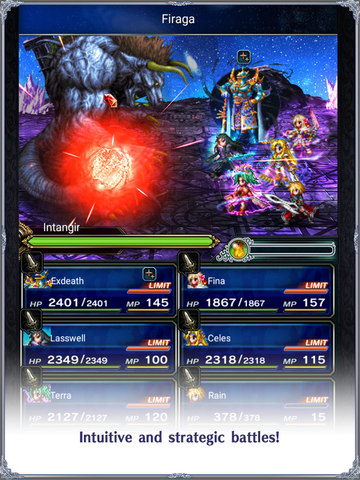 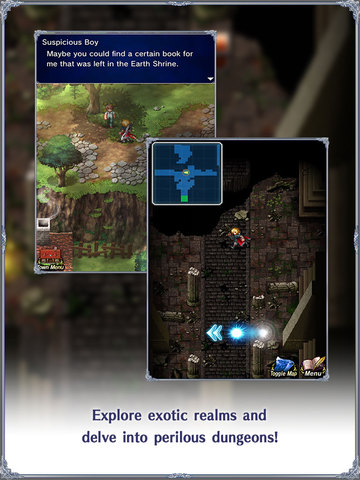