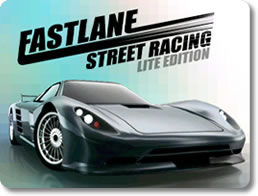 Race to the Finish Line at Over 100 Miles per Hour!

The Fastest Smartphone Game Ever

Have you ever wanted to blast across the highway at dangerous speeds while on your smartphone? Not literally of course, but through a fast-paced racing game that harkens back to the arcade days where speed and style were the keys to victory? With Fastlane Street Racing, you finally can!

With crisp three-dimensional graphics for the modern age, expansive tracks, responsive controls, and a constant level of challenge, you have an old-school racer that quickly picks up speed and never lets up. Just be sure to buckle up and make sure your airbags are installed; this is going to be one wild ride.

A Game of Choice

Fastlane Street Racing isn’t just some cheap little racer where you plop down a single car and drive in unspectacular circles. It’s brimming with as many options as most of today’s commercial racing games. You won’t find any shortage of variety or challenge here.

Fastlane Street Racing features a revolutionary new control scheme that’s made possible thanks to the technological marvels of its portable nature. It’s fast, responsive, intuitive and like nothing you have ever experienced before. You’ll be amazed at the stunts you can pull once the power is literally in your hands!

Get Your Game On

There are multiple game modes available for Fastlane Street Racing, all of which require you to employ different skills and strategies to win.

Do You Think You Can Keep Up?

The name should tell you all you need to know. Fastlane Street Racers is fast; it may even be the fastest game you will likely ever find for an iOS or Android device. Needless to say, it’s not for greenhorns. However, if you have the skill, the guts, and the ability to keep up with it, you’ll find a very rewarding racer that you can take with you everywhere you go.

Get in the driver’s seat today. Don’t be shy; the Lite Edition is available for free!

Racing games don’t have a very prominent place in the mobile gaming scene, but Fastlane Street Racing proves that such a notion does not need to last. This isn’t your usual puzzle game in disguise; it’s a bona fide classic arcade racer. It’s fast-paced, you control every single motion that your car can make, and you’ll drive on a healthy variety of specially-designed tracks.

There are a number of rough spots that can’t exactly be ignored, but Fastlane Street Racing Lite is without a doubt one of the best racing games available for iOS devices and a hopeful sign of things to come.

The first thing you will likely notice about Fastlane Street Racing is that it looks very good. Everything is depicted with crisp and colorful three-dimensional graphics, from the cars to the assorted cityscapes you’ll be blazing through. They may not be the most state-of-the-art visuals out there, but they are still clearly pushing mobile computing technology to its absolute limit.

Best of all, it pulls off this level of detail at a consistent frame rate; this racer won’t slow down for even a second! All things considered, this game would not look out of place if it was on the Sony PSP or Nintendo DS.

Meanwhile, the audio quality is competent all around. The engine of your car will purr with satisfaction as you rev it up, and the asphalt will hiss as your vehicle’s tires grind upon it with ever power slide you pull off.

Fastlane Street Racing could probably have benefited from a more expansive and energetic soundtrack like what you’ll hear in a lot of other commercial racing games, but one should not really fault Atod AB for going cheap in this department too much. You can easily plug in music from your own playlist and that will likely do the job better than what the developers could ever imagine.

Not Quite a Race to the Finish

Calling Fastlane Street Racing a racing game might be something of a misnomer though. While it certainly has all of the familiar trappings of traditional arcade driving games, it doesn’t have much in terms of racing against other cars. There are three game modes that largely test your driving skills in other ways.

The first of these is Arcade mode, where the clock is the only thing you’re racing against. You drive from checkpoint to checkpoint, adding precious seconds to your time in order to keep it from running down.

The second mode is Time Trial, which involves racing against the clock in a different way. You want to reach the end of the track within a certain amount of time, and a ghost car will be visible to give you an idea of how well you’re doing in accomplishing that. If you beat the record, then a ghost recording of your own path will replace the old one. It’s pretty neat all around.

The third and most interesting game mode is Challenge. This offers a variety of goals for you to tackle, such as completing a track without touching a wall. It even has some actual racing going on, albeit against only one opponent.

While it’s disappointing that the bulk of the game is spent racing against time instead of against other cars, the content that is available is nothing to shake a stick at. There’s a good quantity and variety of tracks set in all sorts of different locales, the level of difficulty usually scales up at an appropriate pace, and the assorted games you can play in Challenge are a load of fun.

An Interesting Way to Drive

Perhaps what really makes Fastlane Street Racing stand out is the way it’s played. The touchscreen allows you to control your car via a pair of on-screen buttons shaped like a gas pedal and brake. You can speed up, slow down, and drive in reverse like in any other driving game. It works quite well and the controls are responsive enough; if anything, it feels like playing a game on a portable console like the PSP.

The interesting part is where steering and banking comes into play. Fastlane Street Racing relies extensively on your device’s accelerometer. If you want to change direction, you have to literally tilt your machine.

This has its good and its bad points. On the positive side, it definitely feels unique and is fairly immersive; it’s kind of like spinning the steering wheel of an actual car and it makes the game feel more hectic than it would normally be. However, it can also take some getting used to.

Getting around tight corners with the accelerometer is more difficult than with a more traditional control scheme. This is partially due to it being harder to predict how much your vehicle will turn as you tilt. Most of the time, it’s simply because you’re going to spend a significant amount of your playtime shaking your screen and messing up your field of view. This can make tackling the harder or even more intermediate areas of the game incredibly frustrating. Turn the difficulty down to the lowest setting if that’s what it will take to enjoy the game. Even the easy mode can offer a reasonable challenge until you get your skills up to snuff.

Fortunately, Fastlane Street Racing is not impossible. It just requires a different set of skills than what we’re used to employing in the genre. Drifting is vital to success; if you don’t know how to drift in this game, you’re not going to get anywhere. It can be kind of annoying how so much emphasis is placed on one technique to the detriment of everything else, but mastering the drift can make Fastlane feel a lot more rewarding.

Is Fastlane Street Racing Lite a perfect game? No, it is not. Would it have benefited from more actual racing? You bet it would have. Can it be a frustrating experience? Yes, it can turn out that way.

However, if you can find it in yourself to stick with it and learn to play on the game’s terms, you just might find a very sexy racer that you can take just about everywhere. It’s fast, it’s frantic, it’s challenging, and it has most everything that we expect to find in a good racing game.

More than anything else, it shows that there is a lot of untapped potential in the mobile gaming scene. Even if Fastlane Street Racing may not realize it itself, it’s the first step the genre can take in this brave new world of gaming. 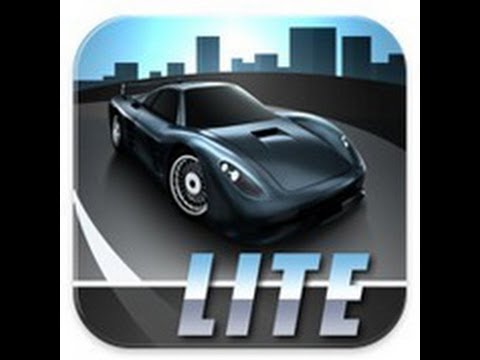 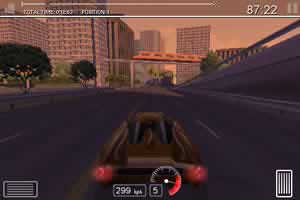 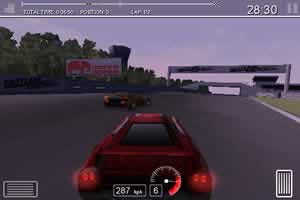