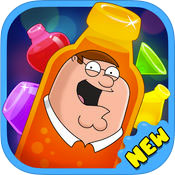 A Waste of Freakin' Time

Back in the Saddle Again

It stands to reason that the next Family Guy mobile game would be derivative of a popular mobile genre. The first was a town-builder, and now Family Guy - Another Freakin' Mobile Game gives us a match-3. A derivative match-3, naturally.

It's all about the drinks (i.e. matching).

Family Guy - Another Freakin' Mobile game is just that: another freakin' mobile game. The association to the cartoon doesn't do anything to help it stand out among the extremely dense crowd of match-3 puzzlers out there. In fact, the seemingly lazy way the cartoon tie-in bits were handled do more harm than good. I wouldn't blame anyone for being curious, but there's much better out there.

Oh hey, a match-3 game on a mobile platform. That's new and interesting, right? Yeah, I know. The thing is, I want to be able to say that Family Guy - Another Freakin' Mobile Game manages to do things a little differently, or that it represents the cartoon well and might at least make fans of the show happy. I'd like to be able to say that, but then I'd be a liar.

To its credit, I guess, Another Freakin' Mobile Game doesn't try to hide what it is. I mean it's clear from the title. It's just another mobile game. This time a match-3 puzzler that's just like most other match-3s you may find after typing it into a search bar. Maybe it's just because I reviewed Star Wars: Puzzle Droids last week but the similarities are uncanny. In a mechanical sense, they're practically identical except that Another Freakin' Mobile Game actually has fewer gameplay features.

Before I get too far into dumping on this game (oh it's gonna happen), I will admit that the general look of the characters is nice. Recognizable folks from Peter to Cleveland to Brian to Tom Tucker all look like they've been pulled right from the show. Their animations also look pretty good, though they aren't quite as smooth as their more official counterparts. Of course then there's the counterpoint of the victory animations that play every time a level is completed not being skippable, and they sometimes take a while to finish. Honestly though, interrupting the flow of gameplay is the least of this game's problems.

I'm not going to tap dance around it - this game showcases one of the laziest adaptations of a popular license I've ever seen. And I've played The Hobbit: Battle of the Five Armies - Fight for Middle Earth. There is zero love here. The audio clips are tacked on, of a very poor quality, and often cut off at awkward times. The snippets of written dialog that are meant to convey 'story' exist as soulless fan-service that doesn't do a very good job of fan-servicing.

The biggest distraction for me has to be the vulgarity and crassness. Not that it exists - I've watched and enjoyed Family Guy up to a little beyond the point where Stewie and Brian travel back to Nazi Germany with Mort Goldman - but that it's so pointless. What made this kind of stuff funny in the earlier seasons was how well it played into the jokes (and how funny those jokes were). Here it's like they just put it in the game because they felt like they had to.

I'm also rather surprised that it made it through Apple's supposedly rigorous quality control standards (I was stifling a laugh while writing that). The entire point of the game is to match three or more like-colored beverages to fulfill orders and get people drunk. And sometimes collect condoms for Quagmire. I know this is more of a problem with Apple than Fox, but I'm pretty sure this wouldn't have been allowed on the App Store if it weren't associated with Family Guy or had a big name publisher backing it.

As a match-3, Family Guy - Another Freakin' Mobile Game feels like a carbon copy of any other title in the genre I could randomly pick out of a crowd. As a Family Guy reference/in-joke, it's as devoid of entertainment and humor as the last several seasons of the show. I mean I suppose someone entirely new to the genre might have some fun with it, but we could all do much, much better than this. 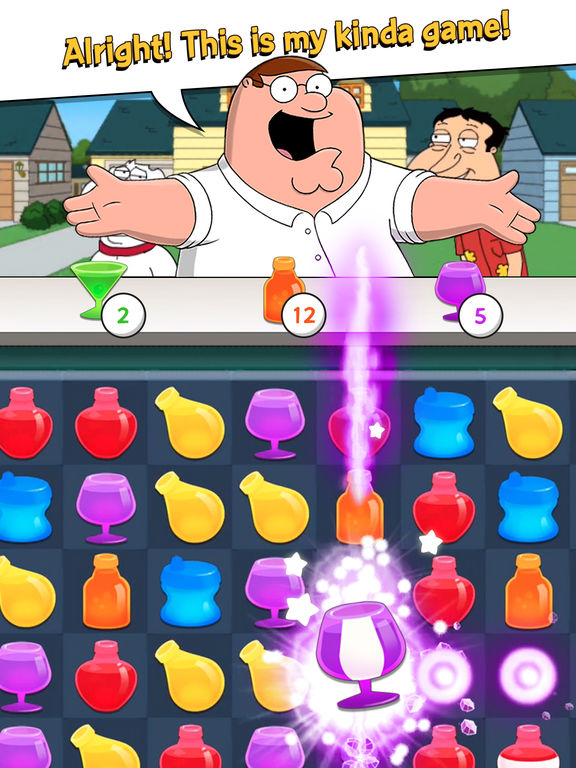