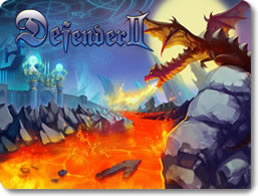 Take Control of Castle's Defenses and Ward Off the Invading Army!

Another Day, Another Defense to Mount

There’s never a dull moment in the life of a castellan. It seems that every day, some no-good army of demons serving a wannabe dark lord just wants to bash down your gates and pillage your lands. Luckily for your subjects, you’re not about to make it easy.

Armed with the latest in castle defense technology and destructive sorcery, your castle is ready to take on everything that so much as looks at it funny. Man your weapons, take careful aim, and mow down those enemies that are marching for war. If that isn’t enough, then just flick your wrist and watch them be incinerated in an instant with one of many nasty spells. The power is yours to protect the castle and kingdom in Defender II!

The monsters are coming to your castle in full force. Their mission is to destroy your walls at any cost, even if they have to scratch at them with their claws and nails. Don’t let them. Use the ballista and an assortment of spells to kill them one by one. No matter what happens, your castle must never fall!

Defender II will give you a lot of mileage with the singleplayer portion. However, if you really want to see how you stack against other castle defenders, then you can opt to play against another player.

Victory is at Hand!

If the old tower defense genre feels a little too hands-off for you, then Defender II might be a breath of fresh air. It not only lets you determine what kind of defenses your castle will have, but puts you in direct control of them as well. With hundreds of enemies marching to your walls, you’re going to have one heck of a time taking them all down, but it will feel so much sweeter when you do.

Take your part on the ramparts in Defender II, and protect the kingdom with everything you have!

What is it with demons anyway? Why do they feel the burning need to invade fantasy countries en masse all the time? Does human flesh really taste that good? Whatever their reasons might be, Defender II once again casts you as the lone sentry in charge of warding off the latest monster invasion. There's really no story to speak of here, but thankfully, the app is able to get by just fine on its gameplay alone. It's easy to learn and shows a steady progression both for you and your enemies, making it a very fun game to play. That is provided you can deal with the grind and repetition.

Playing on the Defensive

If you're familiar with the first Defender, then nothing about the sequel will be out of the ordinary. A horde of monsters come charging at your castle in waves, hoping to chip it down bit by bit, and it's your job to kill them all before that happens. Things start off pretty basic; you've got a simple crossbow that shoots bolts at a slow but steady rate, and you're killing monsters that only move forward and wail on your castle walls with their weak fists. However, things steadily ramp up as you progress through the levels. Monsters that are stronger, tougher and faster start showing up, they come in much greater numbers, and you'll even start seeing some that can unleash powerful attacks at range. Keeping their numbers down is a definite challenge, but thankfully, the level of progression also works in your favor.

As you kill monsters and complete levels, you earn money and crystals that can be used to improve yourself in a variety of fields. Some of these are pretty basic. For instance, you can increase your rate of fire, the power of every bolt shot, and the abuse your castle can take before it falls. Others are a lot more interesting. You can purchase a variety of spells that are useful for killing or freezing several foes at once, arm yourself with a slew of deadly crossbows that fire multiple bolts in a wide arc, or set up a moat of lava. There are a lot of things to choose from here, and regardless of which upgrades you decide to pursue, it feels immeasurably satisfying to see them make short work of the invaders.

It helps that defending the kingdom from the scum of the world is an absolute snap. Shooting a bolt is as simple a process as tapping your screen, and keeping your finger pressed down on it will ensure your weapon of choice unleashes a steady stream of projectiles. You don't need to worry about ammo in Defender II; the only thing that you need to keep an eye on is where your enemies are. Arrows shoot in the direction of your finger, so shifting your aim can be done just by simply sliding it around the screen. The process of shooting feels very fluid and won't put any strain on your hands.

The only time when you will want to withdraw your finger is when you need to cast a spell. That is thankfully also an easy process. You simply tap the icon for the spell you want to cast, and drag it to wherever you wish to set it off. Spells look incredibly flashy and are useful for getting you out of a jam, and they only get better as you level them up. However, mana is limited and each spell is on a cool-down, so you need to be strategic with how you use them.

While Defender II is largely a singleplayer app, it does boast some form of competitive gameplay. You and another player play parallel to one another, fending off an infinite number of invaders separately but simultaneously. The winner of the match is whoever lives longer. It doesn't change things too much, but the added competition does add a bit more excitement to the mix. It helps that multiplayer lets you observe how things are going on your opponent's end, so you might be able to pick up some neat strategies just by peering in.

Could Look and Sound Better

In terms of presentation, Defender II is merely adequate. The visuals aren't particularly weak, but nothing about them stands out. The background is crisp and detailed, but looks about how you would expect it would. The monsters are decently animated and kind of endearing, but they're not very memorable either. Spells look cool, but they alone can't carry the package.

On the other hand, sound design is more on the weak side. There are only a couple of basic tracks to go with your monster-killing. Neither is annoying, but they do get old pretty fast. Sound effects are a little better, but a lot of them sound like they've been ripped from other games. If you've played any of the old-school 'Sonic the Hedgehog' titles, you'll likely hear the familiar whirl of the blue blur's spin-dash. Thankfully, both sound effects and the background music can be shut off if you find them distracting, so they don't detract from the experience too much.

Defending the Realm is Tiring

As fun as mowing down evil demons can be, you can only do it so much before it starts to feel repetitive. While new monsters can have different attacks, different movement speeds, different formations, and so on, the strategy remains the same: kill them before they reach the wall. There will be occasional moments that call for you to pull some wild hat tricks, and upgrading your stuff will help spice things up to a certain degree, but this is still a very repetitive game in the end. It gets even worse when you encounter an overpowering force you just stand no chance against. Your only option when that happens is to either grind, suffering even more grueling tedium, or buckle down and just buy the upgrades you need with real money.

Defender II could probably afford to be more three-dimensional with its gameplay. When it's bad, it's a boring grind. Fortunately, there is more good than bad to be found here. It's always great to see your enemies fall to your constantly improving collection of weapons, abilities and spells. It's just best to limit those instances to your coffee break at work. 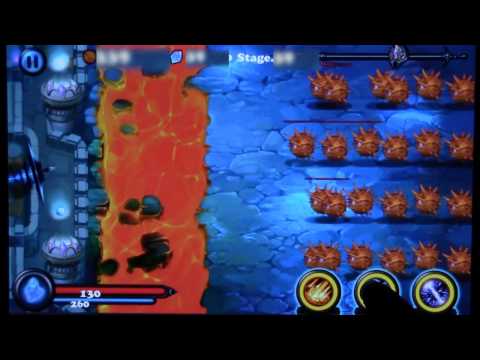 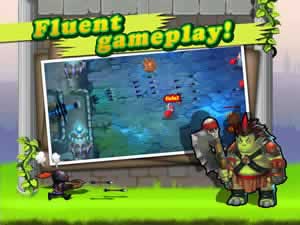 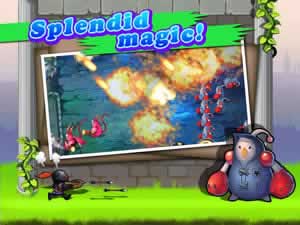