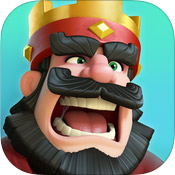 Destroy the Enemy Towers with Your Deck of Stalwart Warriors!

A New Way to Clash

Times have changed in the world of Clash of Clans. Victory can no longer be pulled from the jaws of defeat via a horde of barbarians. This more civilized land requires greater precision, and a more gallant breed of warriors to lead the charge. This is Clash Royale. Combining strategy gaming with card collecting, and setting it in the colorful Clash of Clans setting, Supercell challenges you to think of new ways to outsmart people all over the world in yet another thrilling app for Android and iOS devices everywhere.

Every warlord needs an army at his or her beck and call. In Clash Royale, the power of your army rests within the cards. Get them all and ensure that your clan is the biggest and toughest one of all.

Combat in Clash Royale is an intense battle of wits. You must outsmart and outmaneuver your opponent at every turn, for even one second of hesitation will spell doom for you. Whichever player topples the opposing castle first wins.

Clash Royale boasts impressive social tools that will enmesh you in its vast community. The world may be full of competition, but you can rest assured knowing that someone will always have your back.

With Clash Royale, you can experience a new blend of strategic gameplay never seen before in the world of mobile gaming. With thousands of players to take on, dozens of cards to collect, and all sorts of soldiers to command, you have an app that's worth every optional penny you spend on it. Anyone looking for a fast-paced cerebral romp owes it to themselves to see what Clash Royale is all about.

The Clans are Clashing Again

Everyone's heard about Clash of Clans at this point. You might not have played it yet, but you'd be hard-pressed if you didn't recognize the Barbarian with his thick handlebar mustache. Solid strategic gameplay, charming visuals, and a wacky sense of humor have done much to help Supercell and its flagship app stand out.

Clash Royale is a spin-off set in the Clash of Clans world, but don't let that fool you; this is an entirely different beast. There is no base-building or resource-gathering to be found in this app at all, so if that's your thing, turn away now. Clash Royale is more of a hybrid between real-time strategy, tower defense and deck-building with trading cards. It may sound confusing, but it really isn't. Clash Royale excels in its beautiful simplicity to provide an amazingly fun and addictive game that stands on its own merits.

The moment you start Clash Royale up, the app wastes no time in getting down to business. The object of the game is so simple, that the tutorial is brief and as hands-off as it gets in a mobile game, which is very refreshing in this day and age where they typically last for at least an hour. You have a castle on one side of the map, your opponent has one of his own on the other side, and your goal is destroy his first using an assortment of troops, spells and buildings. Simple drag-and-drop controls are all it takes to use and position any of those things on the battlefield, and that's by and large all the app needs to teach you. After that, it's all about learning as you go, for the gameplay can be surprisingly sophisticated once you've got the basics down.

While Clash Royale borrows a few pages from the RTS genre, it's simplified to make it easier to handle on a touch-screen interface. You won't take direct control of any units placed on the map; like Boom Beach, they'll move and attack of their own accord, usually in the direction of the nearest threat or destructible object. All the various troopers you can deploy vary in their attributes and attack patterns. The Knight is a basic yet economical melee unit, Bombers inflict splash damage with their explosives, and Giants are capable of soaking up tons of abuse, but only ever target buildings. Besides them, you also have a number of spells to cast and buildings to construct, which can do all sorts of things like provide additional damage, weaken enemies, buff ally units, and so on.

Just like Clash of Clans, you're limited by how much Elixir you have on hand. Elixir is not something you produce and store; it regenerates over time. Naturally, more powerful units and spells are more costly than weaker ones, so you need to constantly weigh the pros and cons of what you want to do, as well as judge when you want to act. Spending all your Elixir at once may not be wise, since your enemy can always squash whatever cunning plan you had in mind and leave you vulnerable for a significant amount of time.

All in all, the combat of Clash Royale is surprisingly tactical. A lot can happen on such a small screen, as both you and your opponent will be scrambling to counter each other's moves. For instance, one player can have a Giant lead the charge into your camp, drawing your defensive fire away from the Knight and Archer that are escorting him. You can deal with that by using the Skeleton Army to summon a large number of undead minions who can swarm the Giant. However, that will be a waste if your opponent has an Arrow spell ready, which can kill all your bony friends in one fell swoop. This exchange can happen in less than ten seconds, and oftentimes, a few seconds will mean the difference between victory and defeat. Clash Royale is very much like a real-time game of chess.

It's All in the Cards

You can see where the strategy and tower defense comes into play, but how is Clash Royale like a card game? Every troop, spell and building has a card to represent it, and you can play whichever card you happen to have in your hand. While this means there's a degree of luck to the game, this is thankfully offset by the app's deck-building feature. Clash Royale works like a very simplified version of Magic: The Gathering in that there's a strategic element in how you assemble your deck. Granted, it's not very expansive or in-depth; there are only a few dozen cards in total, and your deck can only consist of eight, but it's enough to formulate a general play style without getting too bogged down in statistics. What's especially nice is that you can make up to three decks to switch between.

Like all mobile games, there's an element of progression. Just having the right cards for your deck isn't enough; you need to upgrade them if you want to stay competitive. This is done by collecting enough copies of the cards and spending gold, both of which are obtained from treasure chests that you earn from winning matches or which the game will give you from time to time. This isn't bad in and of itself, but it does lead to what may be Clash Royale's most glaring weakness.

The process of opening chests is very slow. You earn a free chest once every four hours, and chests you win in battle can take at least three hours to open. Unless you pony up the cash for gems, getting all the cards and upgrades you want is going to take a while. However, if you take a moment to think about it, it's not really that bad a deal. Joining a clan can make things easier for you, since clan mates can lend cards to one another and earn additional gold and experience in doing so.

Furthermore, the app in no way limits how long you can play with an annoying energy meter, and it makes sure to reward you for skillful play through an elaborate trophy system. You win trophies from victories, lose them in defeats, and getting enough of them unlocks new arenas which in turn affect what loot you get. Theoretically, just playing the game normally at an even pace and improving your skills at it through natural practice will really be all you'll need to progress.

If practice isn't enough for you, then you can learn a thing or two from the experts. If you swing over to the TV Royale submenu, then you can watch replays of matches played all over the globe. Needless to say, this is a cool feature that will show you just how crazy high-level play can get in Clash Royale.

Overall, Clash Royale is a fun, polished and surprisingly consumer-friendly app. It's a snap to learn, a beast to master, just as colorful and charming as Supercell's previous titles, and it's made even better with some solid community tools. Get it if you're into strategy or tower defense. Get it if you crave a solid multiplayer experience. Get it even if you don't like Clash of Clans, since it's a different kind of game entirely. Whatever you do, just get it! 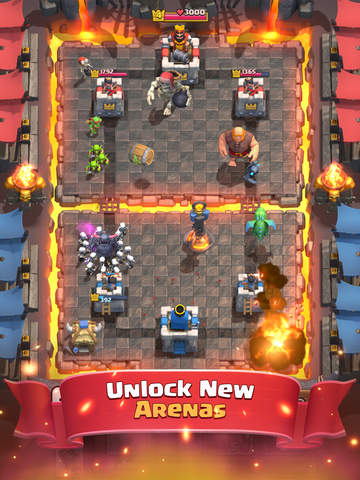 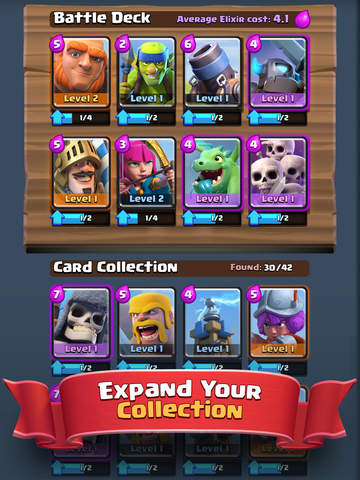