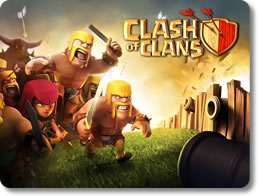 Build a Fortified Village and Raid Other Players for Resources in This Strategic and Addictive Free Mobile Game!

What’s the first thing that pops into your head when you think of mobile gaming? It’s usually any variety of fast-paced puzzle games or objective-based simulators. However, Clash of Clans is undeniable proof that it doesn’t always have to be that way.

You’ll build a fortress, erect walls to safeguard your territory, man you defenses, scour the land for resources, and train a variety of fierce warriors who live only to win glory in your name. When your army is sufficiently equipped and trained, you may then send them out to loot, pillage and burn the countryside of either your world or the world of another player. Roll out the maps and start drawing up battle plans; you’re about to go to war in Clash of Clans!

How does Boom Beach, the newest mobile war-strategy game from Supercell, stack up to Clash of Clans? Find out in our DFG Exclusive Review!

Set Up Your Base

No horde of barbarians ever began a wave of terror without first establishing a home to build their strength from. In Clash of Clans, you’ll spend a fair amount of time designing and setting up a base where you can gather resources, train your troops for battle, and discover new weapons of war.

Nothing says power better than a few hundred men at arms ready to answer to your beck and call. Clash of Clans lets you assemble your armed forces using a nice variety of units, all of which have their areas of expertise.

Put a Spell on Your Enemies

The army might be the source of most of your strength, but that doesn’t mean you’re going to spend the whole campaign sitting off to the side. Over time, you can learn how to cast an assortment of awesome spells.

Turn the Web into a Battlefield!

The computer will pit you against many fierce opponents, from roving bands of goblins to enemy clans. However, no army will prove to be a greater challenge than one that is led by another human. In Clash of Clans, you will have the opportunity to go online and face off against other players in a variety of multiplayer matches. Throw down the gauntlet, declare war, and prove the superiority of your army!

If there’s one thing that Clash of Clans is ready to declare war on, it’s the idea that real-time strategy action has no place in the mobile gaming world. It has everything that the genre is known for: deep base construction, a creative variety of units to train and arm, mighty heroes to control, and a lot of viable strategies that can earn you one victory after another. The ability to challenge any player in any location adds even more longevity to a package that’s already highly likely to last you for a long time.

Get Clash of Clans now; it’s a winning strategy!

A playlist series from a Clash of Clans expert. Walks you through the very start of the game and the best choices to make to get a good base design and best use of your resources. Excellent for anyone just starting the game. Updated for September 2014.

A Clash of Genres

Luckily, the guys over at Supercell were smart to enough to avoid hopping on the bandwagon. Constructing your little virtual corner of Heaven is only half the fun in Clash of Clans. The other is training an army before using it to terrorize the countryside or the player base for kicks. It all depends on your mood. When taking that into account, it's a fun and surprisingly refreshing title, provided you can get past the aches and pains that usually go hand in hand with the freemium business model.

Visually, Clash of Clans isn't much to talk about. The buildings that you construct are all as basic as it can get. The environments are not much better; they're often just large expanses of green fields with maybe the occasional rock or tree. A lot of characters can be displayed on the screen at once, but their animation cycles are awfully simple. It's understandable why things are this way; a real-time strategy game made for a small-screened platform doesn't need to give you a detailed view of the battlefield, but a broad one. That still doesn't make it any less noticeable.

On the plus side, the artists have done what they could to at least ensure that their game has a personality despite the limitations. The art direction is very quirky, colorful and fun. Every character, unit and hero has a distinct appearance that's very reminiscent to super-deformed anime. They're all kind of cute in their own ways, but not to the point of being sugary or annoying. Chances are good that you'll come to love the stoic Archers, excitable Wall Breakers, confident Giants and the Hulk Hogan-like Barbarians for the charm they bring to the table.

The city-building portion of the game is pretty typical all around. You need to generate resources like gold and elixirs in order to make anything in the game, and you need to construct various facilities in order to train new units. Buildings must also be upgraded with even more resources to unlock more powerful units and perks. The process is pretty typical, but it works well enough.

Things get a bit more interesting when the strategic side of the game is taken into account. Your city will always be vulnerable to attacks from other players, so it's very important that you ensure the place is well-defended. You need walls, cannons, archer towers, anti-air weapons, traps and so on, and you need to place them in smart locations for maximum effect. It won't do to put your most valuable buildings out in the open; you'll want to make sure that's there's a deadly gauntlet of defensive weaponry ready to make life miserable for any enemy soldier that tries to waltz on through. Planning for the security of your city is a lot of fun and adds a new level of strategy to the old formula. It's even better when you see it in action.

Combat is where the real meat of Clash of Clans comes in, and it works surprisingly well to its credit. Most mobile games tend to automate the battles based on your troops' statistics. Meanwhile, Clash of Clans lets you direct the forces yourself in a manner not unlike that of a PC real-time strategy game.

Simple numbers aren't going to see you through the day either. You need to send in the right troops to topple the right defenses. At the beginning of the game, the only soldiers you have at your command are the Barbarians, who fight up close and personal, and the Archers, who attack from a distance. Both are effective at slaughtering enemy soldiers, but walls will stop them in their tracks while cannons rip them to pieces. When that happens, you need to deploy the Giants and skeletal Wall Breakers to deal with the cannons and barriers respectively. As you play the game, you'll unlock even more sophisticated units like Dragons, Wizards, Healers and Hog Riders. Each one has its collection of strengths and weaknesses, and it's your job to bring in the right troops to counter your enemy's actions and defenses.

Whether you're raiding an enemy base or defending your home turf, combat is a very fun and tactical affair. It may not be on the level of StarCraft, but casual gamers whom have never touched a strategy game before should be able to grasp the basics of Clash of Clans pretty quickly. Even better news is that the game includes plenty of single and multiplayer content. If you don't feel like raiding enemy players, or the matchmaking service just can't find any for you, then you'll have plenty of quests and computer-controlled enemies to fight in the meantime. It may not be as intense as most player-versus-player battles will be, but it's good practice and can net you some nice prizes along the way. You can even do it while waiting for some lengthy tasks to complete. That's one great thing about Clash of Clans: you don't need to wait in order to progress. You can often find a way to kill time while playing.

That aside, there is one major annoyance that honestly has no right to be here. At the end of every battle, you'll lose all the troops you deployed. It doesn't matter if they lived or died, nor does it matter if you won or lost. Your troops vanish forever, leaving you with no choice but to produce more for the next major conflict. The only reason this nonsensical mechanic even exists is probably so that you'll expend more resources, which in turn will make you more likely to spend real money.

The Ugly Side of War

This is a freemium game. You can download and play it for no money down, but the developers are still looking for ways to make money off of you. Making you buy gems and other resources by extension with real cash is Clash of Clans' way of pulling that off.

The good news is that there is no irritating energy meter that limits your playtime whatsoever. The bad news is that the price in resources needed to get anything done in Clash of Clans grows progressively steeper, especially after you get through your initial stock of gems. In that way, it functions just like an energy meter in that you'll either have to put the game down for a while once things run out, or cough up the dough to keep going for the moment. It could be worse, but it could also be a whole lot better.

Even so, there's no denying that Clash of Clans is a load of fun. Its distinct brand of fantasy is funny and charming, it's cool to properly fortify your home base against enemy invaders, and the fights offer some nice tactical challenges that are mostly unheard of in mobile gaming. If you want a new brand of city-builder that mixes things up a bit, or are looking to play a light strategy game, it's more than worth a try. 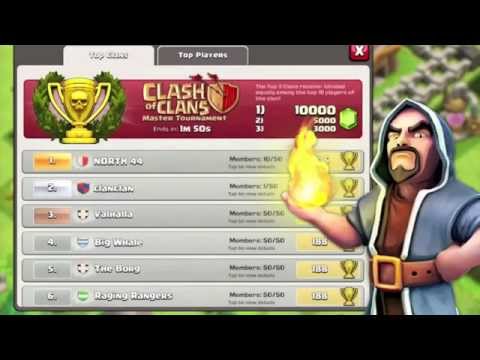 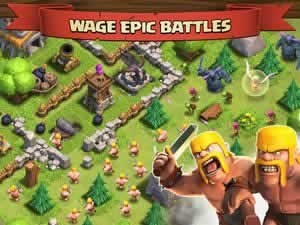 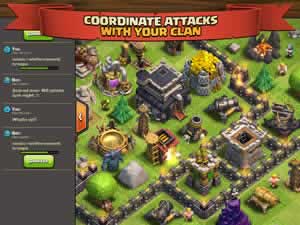