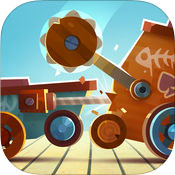 CATS: Crash Arena Turbo Stars is a somewhat odd game about cats battling other cats using siege engines. I mean it's cool, naturally, but it's also odd. The trick is to cobble together a better death machine than your opponent.

It's All in the Blueprints

Since there's no direct control in a match, victory is entirely dependent on how well put together your vehicle is.

Good For What it is

Anybody going in to CATS: Crash Arena Turbo Stars expecting an action game is going to be disappointed. That's just not what it is. However, if you know to expect hands-off combat (and you're okay with that) it can still be enjoyable.

As Seen on TV

The setup behind CATS: Crash Arena Turbo Stars is a strange one. Apparently in this world of semi-anthropomorphic felines there are TV shows sort of like Robot Wars or whatever it's called. Except instead of pitting remote-controlled killing machines against each other they're pitting piloted killing machines against each other. Because that sounds like a fun pastime, right?

In CATS: Crash Arena Turbo Stars, you play the part of a fan of this weird gladiatorial program. One day, while watching the carnage, your creepy uncle shows up and gifts you with a little death machine all your own. Then enrolls you in the league, because of course he does. From there it's all a matter of cobbling together a better and better contraption, defeating other competitors, earning better parts, then using those parts to cobble together an even better contraption. It's a pretty straightforward pattern.

Despite the oddity of the world being filled with cats for no apparent reason, I do like the look of it. Everything is pleasantly cartoony, and the little kitty victory growls are adorable. Their little heads poke up from the vehicle and they make a tiny roar and it's more or less perfect. I also dig the eject and floating parachute animations of the losing cat once their machine is destroyed. It's cute, and I like cute. I can't help it.

There's also an impressive amount of customization when it comes to your engine of destruction. For one thing, there are lots of different core body types, many of which have different health and energy stats as well as varying points where stuff can be attached. There are also quite a few different kinds of weapons - from ranged to up close and personal. Heck, there are even some bits that won't deal damage but can thrown a rival machine off-balance. And all of these components can be upgraded by sacrificing other parts you don't want and spending some of the cash you earn.

Unfortunately the actual build menu is a bit cluttered and annoying to use, though. It's just one big horizontal slider of parts that you have to scroll through. Parts are grouped, sort of, but anything that's removed goes all the way to the end until you exit the build menu and go back in. Even if that weren't a thing, there's still the problem of having to scroll through multiple miscellaneous bits just to find the one you might be looking for. Assuming you find the one you want and don't accidentally select one that looks exactly the same but has slightly different stats.

The metaphorical elephant in the room has to be the 'action,' though. Granted it's quite satisfying to see your meticulously constructed murder machine tear through your opponents, but seeing is all you do. Once you've built the thing you just sit back and watch it work. This is particularly bothersome when the thing does something stupid, like flop over on its back as soon as the match starts (hurrah for physics!). I don't particularly mind the lack of direct control but it's definitely something to be aware of.

CATS: Crash Arena Turbo Stars is enjoyable, it truly is, but don't download it expecting some sort of white-knuckle action game. Satisfaction comes from upgrading parts and figuring out the most effective way to construct your machine, not from skillfully besting your enemies in a real time match-up. So long as you're cool with that, you should have a pretty good time. 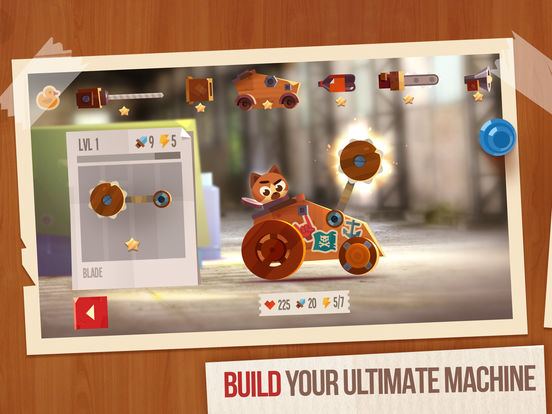 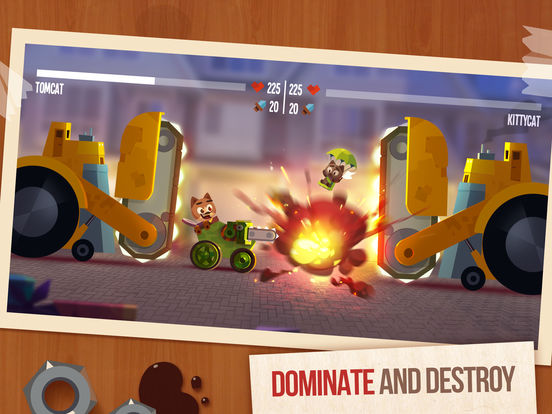