Mix, match and crush candy with all your friends. 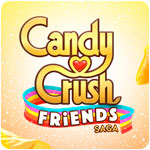 Return to the Candy Kingdom

There's never a dull moment to be found in the Candy Kingdom. There's always some lollipop or other that needs to crushed, there's always some stray critter that needs to be rescued, and there's always a cookie of some sort that needs a good dunking. Honestly, it's too much work for one person to handle. That's why you won't be doing it alone anymore; in Candy Crush Friends Saga, all the buddies you've accumulated over the course of your mixing and matching across the kingdom will be lending you a hand in King's latest iteration of the legendary Candy Crush series.

All the Candy Crushing Action that You Love...

The match-three gameplay you've come to know from Candy Crush Saga is back, and it's just as challenging and strategic as ever.

And a Whole Lot More!

New to Candy Crush Friends Saga is the addition of friends ready and willing to give you a helping hand. Seek their aid, and you'll crush candy like never before!

Candy Crush Friends Saga proves that King is still the undisputed king of the match-three puzzle game. There's more matching to be had, more special treats to fuse, and more pals to join you on your journey than ever before! If you've got a taste for some tactical match-making, then download the app on your phone right now and begin your saga anew.

Candy Crush Saga is more than just a game now; it's virtually a force of nature. You may not have played any games in the series, but at this point in time, you've definitely heard of them. It's inescapable, and just like the equinox, it returns in full force every year in the form of a new title. This year, that title just so happens to be Candy Crush Friends Saga. Surely by this point, the series is getting stale, don't you think? It's not. Candy Crush Friends Saga shows King has learned from its missteps in the past and may very well have produced its best game yet.

Looks More Stunning Than Ever

The first thing you'll notice about Candy Crush Friends Saga is that the visuals have undergone a complete overhaul. Gone are the paper puppet people and two-dimensional graphics that made the previous games look like pop-up books. This app portrays every aspect of the Candy Kingdom as a fully-realized 3D world, from the map which puts you into more of a first-person perspective, to the characters themselves. It looks great! Everything is colorful, everything is detailed, and everything is just bursting with personality. The characters are more expressive than ever; they bounce, cheer and dance all over the screen, and do so with animation that is so fluid, you'll almost want to see them in a feature-length film.

That's a good thing too, because the Candy Crush characters represent the biggest change to the series' formula. They're an intrinsic part of the gameplay now. Most levels give you a choice over which character you'd like to bring along to help you, and each character lends a different ability. For example, Tiffi, the protagonist of the first game, will add red candy fish to the board once you've matched enough red candies, while Yeti will create a light blue wrapped candy once you've matched some light blue confections.

It sounds like a small thing, but this is actually a huge game changer. It gives you another way to add special candies to the board, and consequently gives you more opportunities to combine special candies with each other. The end result is that this is hands-down the most explosive Candy Crush Saga ever. Every time you use the Yeti, it's all but guaranteed you'll be creating multiple homing missiles out of wrapped candies and fish, especially since the AI likes to put these special pieces right next to each other.

It also adds a more tactical layer to the game. The character you bring in changes the way you play, particularly since they make certain matches more desirable than others. If a level is giving you trouble, sometimes just switching your character is enough to get you past it. It gives you more control over the situation and makes the game less reliant on luck than the previous entries. Granted, luck does continue to play a factor in Candy Crush Friends Saga. Just not as much as before, and that's a very welcome thing.

Not as Hard a Candy as Before

The added tactical layer to the app makes Candy Crush Friends Saga feel like the most fair game in the Candy Crush series. It's still riddled with the microtransactions of old, and it still puts a hard cap on the total number of lives you can recharge, but the difficulty level isn't as sheer or all over the place as it's been in the past. You won't hit as many walls as before, and things escalate at a more even pace. The levels that are hard are also explicitly designed to be and labeled as such, so you'll know ahead of time which places you should save your gold and lollipop hammers for.

Purists might bemoan how easy this game is in comparison to its predecessors. They may even accuse it of increased mindlessness, what with the absurd number of special candies you can make and combine. Admittedly, it does indeed feel like you just watch a bunch of explosions go off until you win. However, setting off chain reactions of confectionary bursts is as fun as ever, and has always been the highlight of the series. The fact that you can enjoy them with a whole lot less frustration makes Candy Crush Friends Saga a more enjoyable experience overall.

Candy Crush Saga has had its ups and downs, and working on it for so many years has undoubtedly been a learning experience for King. It seems that with Candy Crush Friends Saga, they looked at what worked and what didn't, improved upon it substantially, and let their graphics artists go crazy while they were at it. The end result is a very fun and charming match-three app that's both thrilling to play and a joy to see in action, and which is arguably one of the best matching puzzlers on the market today. Get it! 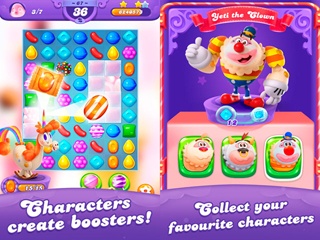 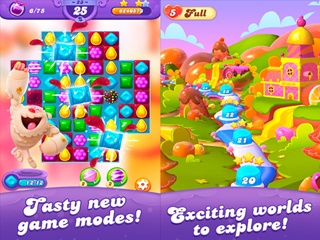