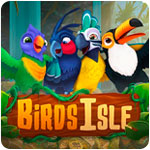 BirdsIsle for iOS is your next match-three puzzling obsession

Owing to a fungal disease, the world is running out of bananas, and climate scientists warned last week that global beer shortages may become a reality in the next few decades too.

Thankfully it looks like we never run out of match-three puzzlers. There are more of these on the App Store than any of us can hope to play in a lifetime, and quite a few of them are pretty good.

That means it takes an exceptional match-three puzzler to stand out, and we think BirdsIsle might be just such a puzzler.

On the face of it BirdsIsle is just an avian take on Toon Rush or similar. It sees you sliding your finger across the screen to bring lines of fruits and other objects together to make them vanish, so that other items can take their place.

Longer lines do more than just vanish - they take other objects on the board with them, either in targeted strikes or controlled explosions.

Each stage has a target that you have to reach, by clearing a certain number of this or that object, and you only have a certain number of moves to do it in. This approach focuses your tactical faculties, and makes for some extremely satisfying near miss victories.

Finishing stages earns you gold, and this is where the BirdsIslei's all important metagame dimension comes in.

Basically, you spend the gold you earn on buying new birds, and improving their conditions in your aviary. You also get to design, build, and decorate this aviary, giving you something to work towards and tinker with as you play.

It's all about maintaining a happy, healthy community of exotic birds in the tropical paradise where the game is set, while at the same time learning some enlightening factoids about their natural habitat.

BirdsIsle's story element really sets it apart from other similar mobile puzzlers. It has all of the color, character, and addictive charm you expect from a high quality match-three game, plus a whole extra gameplay dimension.

Pick it up for free right now on the App Store.

What strikes you when you first boot up BirdsIsle is its relaxed atmosphere. There's a lovely intro video, and the characters - all birds, if you hadn't guessed from the title - are all lovable sorts. They never stop spouting facts about the world, yet this somehow never gets annoying - a testament to the work that's been put into making this a hugely enjoyable puzzle game experience.

Basically BirdsIsle never steps too far away from this chilled vibe, making it a more than worthwhile experience if you're a puzzle game junkie. Yes, even if you've seemingly experienced every match-3 game out there.

Because even though BirdsIsle is a match-3 game, it's a much better than average entry in the genre. It lures you in with its top drawer presentation, and then keeps you entertained by constantly stirring in several different elements into the standard matching-coloured-items gameplay.

You are effectively looking to add more birds in your ornitary by completing self-contained stages. Commonly these are completed by making sure you line up a certain amount of items of a specific colour. It's all too easy to get caught up in creating chains, but these mean nothing if you don't get those specific trinkets off the board - you only have a certain amount of moves to complete the objective in each level too.

So BirdsIsle is a game that doesn't lack challenge, and thanks to a variety of special items it keeps things varied too. You've got items that clear entire rows, ones that seek in on specific coloured items, and then ones that just blast away a whole chunk of the board.

The latter are by far the most satisfying, but all these power ups are useful in specific situations - and crop up once you clear things off the board in a certain way. Clear pieces in a 2x2 formation and you'll get the mechanical bird power up for instance.

What makes these power ups special is that they aren't just nice to have either - they're essential in order to complete certain stages. Making sure you tactically clear the right areas of a board at the right times is essential, especially later on in the game.

So BirdsIsle has certainly got the smarts and the looks, and problems are few and far between. One is that it ultimately isn't hugely original - despite the many power ups and various characters you can unlock.

There's also the fact that as you progress further you can feel the slight clamp of in-app purchases closing in. It's not too oppressive - you can always complete old stages to gain further coins and gems - but levels can seem a little unfair later on if you don't have access to the immediate retry option.

Ultimately though, BirdsIsle manages to be so charming these flaws aren't deal breakers. It's a well presented and craftily assembled puzzle game that will win over the majority of players - casual and hardcore. We strongly recommend you give it a try. 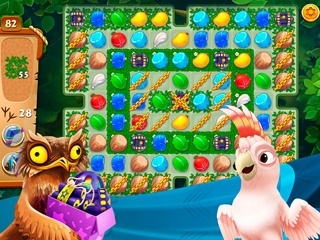 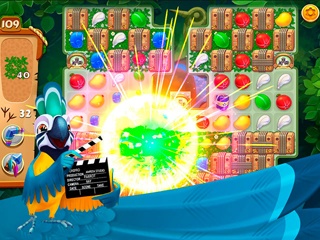