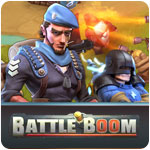 Play Battle Boom and annihilate the enemy army with superior tactics and firepower.

Red alert! Red alert! The base is under attack! Enemy soldiers are encroaching on your territory and employing lethal force on everyone they encounter. There is no parley and there are no terms for surrender. Your only choice is to fight fire with fire. Rally the troops, load the guns, arm the missiles, and most of all, get ready to make things go boom!

The Rules of Engagement

This is Battle Boom, the most intense mobile game of strategy ever developed. The enemy is coming down hard on your base, and they will not stop coming until you eliminate theirs first. Outthink, outnumber and outfight them, and you might just live to see tomorrow.

If you're hankering for a war game that will test your strategic mettle while you're on the move, then Battle Boom is just what the field medic ordered. It has everything you could ever want; dozens of units to control, cunning enemies to fight, tools and tactics to anticipate and counter, and explosions aplenty. Get Battle Boom and make some heroes today!

Can you imagine a less original title for a war strategy game than Battle Boom? It's about as generic and self-explanatory as it gets. You have a bunch of little soldiers who battle it out, and a lot of exploding things that go boom. However, while the title and the game it goes with aren't the most original, it more than makes up for it with a load of polish that makes it once of the best strategy games you can play on your phone.

As with most games of war, it's kill or be killed in Battle Boom. Two military bases stand on either end of an extensive field, and it's your job to destroy the enemy's before he destroys yours. That's easier said than done because he'll be sending wave after wave of soldiers your way as he erects defenses to make it harder for you to even approach him.

Battle Boom is very much a game about movement. You have to keep advancing and you have to keep pushing forward, because you'll get overwhelmed if you don't. It supports this strategy in the way it lets you deploy your soldiers: by making them appear wherever you tap the screen. You can deploy new units on whatever territory you've claimed, and the farther you push your offense, the more territory you effectively take.

Even so, the opposition is often relentless. New enemy units will always be on the attack, and they may even set up bunkers and other defensive armaments to make the long march to the base that much more difficult. To that end, it's important to always bring the right units to counter what the enemy uses. Some are better at taking down soldiers, some are more suited for destroying building and structures, and others specialize in eliminating vehicles. One thing is for sure: with all the things you have to plan for and react to, you'll never be idle for long in Battle Boom, and that's not even taking the missile attacks and air support options you have available.

Know When and How to Fold Them

It should be noted that you won't have full control over what units you can bring in, nor will you ever have every option available to you. Unlike most strategy games, which are all about using gathered resources to fund and build your army, Battle Boom takes more of a card game approach to its design. Every unit has a card to go with it, and you can only use whatever cards are currently in your hand.

Building a proper deck with a good mixture of abilities is the key to victory, and having an improper deck is what will often get you killed. Strategy aficionados might balk at the degree of randomization this app throws at you, but it does admittedly keep things very action-heavy, and making a powerful deck can be very satisfying regardless.

Is It a Comedy or a Drama?

Battle Boom is not only engaging to play; it's a thrill to watch. Seeing all the little soldiers shoot, pound, incinerate and blow each other to bits is great fun, and the sight of the enemy base exploding never gets old.

That aside, while the game looks good and is well-made all around, it's very schizophrenic in its presentation. Characters are brightly-colored and designed with a cartoony aesthetic, but they're set in a world that acts so darn serious. The lighting is always gloomy and enveloped in shadows, everyone speaks in such grim and fatalistic tones, and the music is this sweeping orchestral score highlighting the horrors of war and the thrills of victory.

Nothing looks or sounds bad per se, but they fail to fit together. The characters don't look too dissimilar from what you'll find in the more lighthearted Clash of Clans, but unlike that game, Battle Boom is completely devoid of humor and tries to carry itself like it's Saving Private Ryan. It may just be window dressing, but this app lacks a solid identity that will likely affect how relevant it stays in the long term.

Fighting On the Grind

A more troubling flaw is how grindy the game can potentially get. Battle Boom has an extensive story campaign to play through, and while it usually ramps the challenge up at a steady pace, sooner or later, you're going to hit a road block where no matter what moves you pull or what kind of deck you build, you just won't be able to proceed. When that happens, your only option is to grind upgrades for your cards by challenging other players in PvP matches. This isn't entirely bad; human opponents can offer much more engaging matches than the computer after all. However, it can get tiresome and frustrating after a while, especially if you find yourself on the receiving end of a losing streak.

Battle Boom may not be the most imaginative mobile game out there, but it's well-made all around and doesn't have any real weak points outside of a grindy gameplay model and some inconsistent presentation. If those issues aren't too big a deal for you, then by all means give it a go. 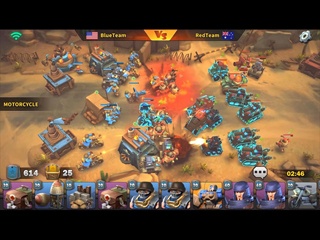 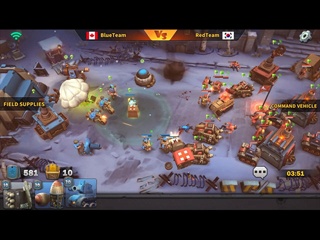