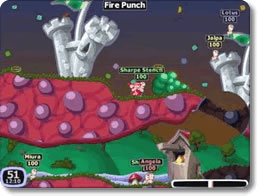 Lead Your Army of Worms Into Outrageously Fun Combat!

So Crazy and So Fun!

What could be better than the first Worms game, you ask? Why, the second Worms game, of course - it's Worms 2, new and improved!

With this second edition in the immensely popular series of turn-based strategy games, you command an elite team of 4 to 8 cute and lovable worms. Cute and lovable, that is, until the intense combat action begins!

Lead your squad against an opposing worm army, using any and all weapons necessary to get the job done. In Worms 2 there are many paths along the road to victory. Choose yours wisely!

Considered By Many to be the Best Worms Game Ever Made!

Exciting, wacky, crazy, challenging, addicting - adjectives cannot convey the fun to be had with Worms 2, and the only way to get the true experience is to give the game a try.

With their one-of-a-kind gameplay, unique 2D style, and interesting environments, the Worms games really are some of the most original games out there.

You've got dozens of weapons at your disposal, from bazookas, petrol bombs, shotguns, and air strikes to banana bombs, exploding sheep, falling concrete donkeys, and even The Holy Hand Grenade of Monty Python fame!

Grab falling crates for power ups and even better secret weapons. With such a great selection, combat doesn't get any better or funnier than this!

Tons of Options and Features for Your Enjoyment

Worms 2 comes with 45 different single player missions in campaign mode. For a quick game, play on a randomly generated map - replay value is high because you won't get the same map twice!

As you fight, the landscape around is affected by your weapons. If you have to, blow up whole mountainsides to get to the enemy!

Name each individual worm on your team. Customize weapon powers, terrain, sound options, even cheat codes. Choose the number of worms on each side in a particular game. With Worms 2, the possibilities are almost endless!

Worms 2 is full of charming, comical characters . . . and they're all worms!

As the battle rages, your little cartoon-like soldiers make funny quips about the ongoing action. Their hilarious antics keep you laughing as long as you play the game.

You can also choose the accents your worms will speak with from lots of options - valley girl, redneck, and many more!

There's Always Someone to Play With or Against!

With such a wide variety of campaign missions and quick games against the computer, Worms 2 holds your interest even if you're alone.

Beyond the excellent single player gameplay, however, the game offers multiplayer options as well. Grab a friend and team up, each controlling some worms, or go head-to-head in a battle for bragging rights! Play hot-seat games on the same computer or play over a local network.

What the Pro Reviewers Say About Worms 2

If you've never played Worms 2, you are missing out so stop missing out and download Worms 2 now!

Worms 2 is a thrilling turn-based strategy game that anyone could enjoy. Teams of up to 8 worms do battle with an array of devastating and outlandish weapons ranging from an exploding sheep to a napalm air strike. Create the battle as you see fit by customizing weapons and levels. Great multiplayer support gives you a number of ways to take on friends or play against computer opponents suited to your skill level. Worms 2 is a whole lot of strategy, a whole lot of hilarity, and just plain fun.

In Worms 2, battle takes place between two or more teams of worms. Each team can have anywhere from 1-8 worms on it. These teams can either be player controlled or computer controlled. Once you've created the teams for your battle, you'll be able to select a level to play or choose a randomly generated one. You'll also be able to change options for the battle (such as how powerful weapons are, how much health each worm has, etc.). Once you've finished setting up the battle, the action begins. The worms on each team will be randomly placed throughout the level and your goal is to eliminate as many other worms as possible and be the last team standing.

One great feature of Worms 2 is the level of control and customization you have in the game. When creating or editing teams you can choose not only the team name, but the names of individual worms as well. You can even change the accents of the voice that your worms use. Of course, the options aren't limited to cosmetic changes. You have a huge array of choices and options to make when it comes to weapons as well. You can change the ammunition of a weapon, the damage a weapon will deal, the size of the explosion a weapon generates, and even more. You can change how much health the worms have, how long the game will last before sudden death starts, the length of each turn, and a number of other options that give you an unbelievable amount of control over the battles.

Create Your Own Levels

Worms 2 has a basic level editor that can be used to make a battlefield perfectly suited to your needs. Battles also take place on randomly generated levels with a wide variety of designs and layouts. You can specify the type of terrain and the amount of obstacles present. All of the terrain and obstacles in a level can be destroyed, which adds to the strategy of play and the importance of selecting a good level to play on.

As a result of the ability to customize and control nearly every aspect of battle in Worms 2, the difficulty can be adjusted in any number of ways to suit your skill or needs. Additionally, the computer controlled teams can have their difficulty level adjusted higher or lower to provide the right challenge. You can challenge yourself with tough and drawn out conflicts, or relax in a quick and easy game as you blow away your opponents. However, strategy still plays a big role in the game regardless of the settings you choose.

Another great feature of Worms 2 is the ability to play against other players and the number of ways in which you can do so. You can take on other players on a single computer, over your local computer network in LAN play, or on the Internet. Beating computers is fun, but there's nothing more satisfying than being able to take on friends in a violent free-for-all.

A Tutorial Would Have Been Nice

The controls in Worms 2 are simple and easy to learn, despite the lack of any sort of tutorial. You can look around the map by moving the mouse. Worms are moved left or right with the corresponding arrow keys, and jump with the Enter key. The various weapons are selected with F1-F12, and fired with the Space Bar. When it is your turn, you can choose which worm to use by using the Tab key. While a tutorial of some sort would have been a nice addition, not having one isn't a huge hindrance to playing the game.

The graphics in Worms 2 consist of “cartoony” 2D action. While they may not match up to many more modern games, they work well for the game and really bring an element of humor that adds to the fun you'll have. There's some strange satisfaction in watching as the worms bounce around from explosions and fires, or turn blue and explode on death.

The sounds in the game also add to the hilarity. As the worms move around and shoot each other, they'll make various comments on what is happening. For example, if a worm manages to damage a teammate with a weapon, you might hear a remark about him being a traitor. On top of the funny comments, the ability to change accents of worms makes them an even bigger laugh. Despite the simplicity, the visuals and audio are great additions to the game.

Worms 2 is an excellent turn-based strategy game that will be great entertainment for the strategy buff and everyone else as well. Do battle with an array of devastating and outlandish weapons like the Homing Pigeon. Customize an unbelievable number of options to create a battle that's perfect for you. Tests your skills against computer opponents or take advantage of the multiplayer offering and battle against other players. Humorous looks and sounds add the perfect touch to an amazing game.

Worms 2 is a game well worth playing.

Funny in game cut-scene and examples of worms blasting each other with some of the available weapons. 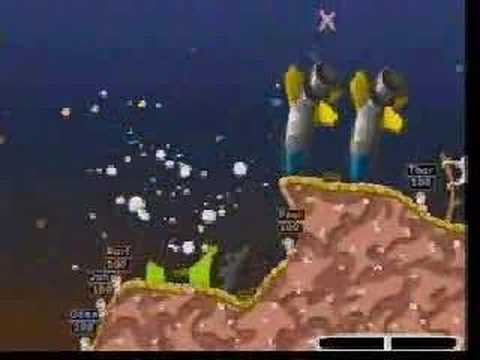 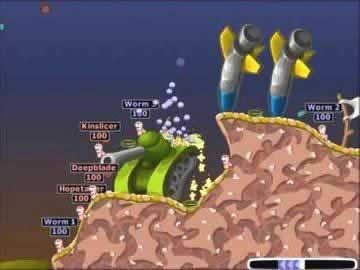 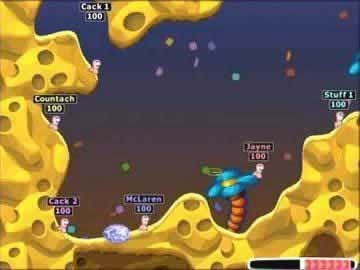