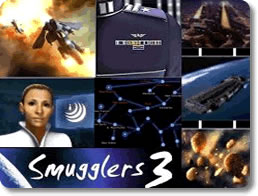 Immerse Yourself in a World of Smuggling, Mercenaries, and Galactic Warfare!

Editor's Update (10/28/14) - You can still get a free trial of this game from the creator, Niels Bauer Games

You Decide the Course of Intergalactic History in Smugglers 3!

The award-winning science-fiction trading game Smugglers 3 puts you in the middle of an intergalactic civil war between aggressive factions. You decide your own fate in this futuristic battle for glory.

Keep Your Allies Close and Your Enemies Closer

Join forces with one of four factions including The Federation, The Outer Rim Alliance, The Syndicate and The Coalition. These warring factions all have distinct differences and monopolies on upgrades so choose wisely.

Smugglers 3 Puts You in Command!

Become a wold-class military general or a lead rebels against the corruption of the empire in this vast galaxy of 75 different planets and 25 systems.

Intense Gameplay That's Entirely Up to You

Be a part of a rich story lines with depth and development that will amaze you for hours. You can decide to trade peacefully or battle your way to glory, but all decisions come with consequences.

Smugglers 3 is For Serious Gamers!

Don't underestimate the complexity of the game because Smugglers 3 is an intense intergalactic economy that you have to make sense of. It's simple, but highly addictive.

Don't Worry If You're New to the Game!

Smugglers 3 features a second-chance system that awards you "Life Points" every time you reach an achievement or get a promotion and these allow you to play again and again without having to repeat gameplay.

To save your games just dock into a planet and click the save game button.

Customize Your Ship, Your Crew, Your Cargo and Much More!

In Smugglers 3 just about everything can be upgraded or customized. Improve your ship's weaponry to defend against attackers or raid other ships or upgrade your cargo bay to hold more goods.

Rise to the Top Ranks!

Reach your goals and complete enough missions and you can get promoted, receive medals and campaign ribbons and be rewarded upgrades.

Every promotion or award you receive also gives you "Life Points" which will prolong your gaming experience.

Be In the Heat of Battle!

You actually battle other vessels and factions in space in Smugglers 3. It's up to you to be stocked full of ammunition and choose which weapons to fire at the various invading ships.

If you are a serious gamer looking for a battle-heavy intergalactic trading game, download Smugglers 3!

Watch some of the game basics like traveling to planets, buying ship upgrades and new ships, and fighting. 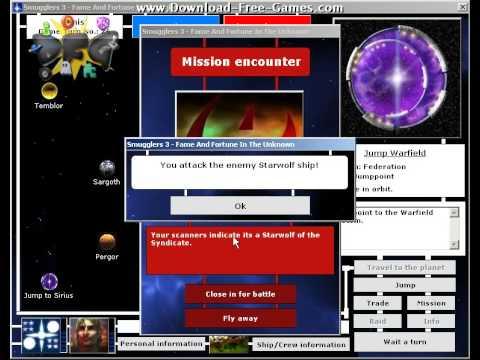 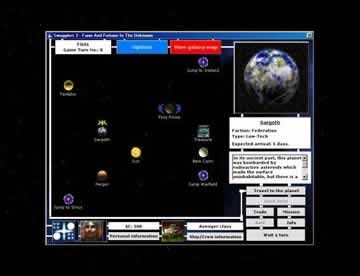 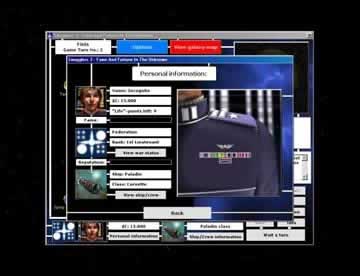