Defend your citizens from monsters by building and upgrading defensive structures! 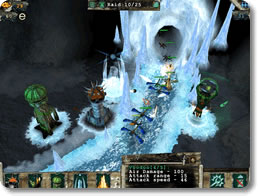 In Master of Defense, you are tasked with building towers to defend your citizens. Waves of monsters will travel along a route to attack your people. Your job is to buy and place defensive towers along the route to destroy the attackers.

Carefully place ground attack towers, magical towers to destroy air units, or plant towers that can attack either with lesser power. Once the towers are placed, you can spend money to upgrade them which will extend their range, damage, and firing speed. The more citizens you save after every monster raid, the more gold you get to spend on towers and upgrades.

As you advance through the levels you will gain experience points to be spent on defensive upgrades. Improve firing speed, range, and damage of your towers. Get more gold from citizens or improve citizen defense against monsters if some get past your towers.

You can even buy special magic upgrades for new towers and defenses. Ice magic will let you build ice towers that can freeze enemies making them easier to hit. Fire magic lets you build fires that monsters have to walk through and take damage. Poison magic gives poison damage to your plant towers making them more deadly.

The great thing about all experience upgrades is they persist to the next level. Once you buy them, you don't lose them unless you choose to cash them in.

Master of Defense is an absorbing game that lets you focus on 1 crucial component of real time military strategy. It is simple but fun and the upgrades are a blast to get.

Think you are hot stuff in your defensive strategy? Just try out Survival mode and see if you can make it past raid 150. If you do, you can truly call yourself a Master of Defense.

So what are you waiting for? Go fry some monsters!

The people of your town are relying on you to defend them from the hordes of reapers, dragons and wizards that are marching on the town. In Master of Defense, you must build towers along the road to defend your town. Air, ground and combination towers must be placed strategically to prevent the evil monsters from reaching the innocent civilians. Wave after wave will test your ability to defend using nothing but towers in this tower defense (TD) game.

This TD game uses the common medieval theme for the setting and styling. In six different locations you must place towers along a twisting road that leads to your village/castle(depends on the map). Monsters will then walk/fly along the road and attempt to make it to your townsfolk. Monsters will come in waves with gaps in between each wave. Each level has a set number of waves that ranges by the level. You can also choose to play the survival mode that will test your abilities with 150 waves of increasingly difficult monsters. The graphics are far above the standard. Each level is well detailed and fully 3D. The towers are all unique and change as you upgrade them.

Most TD game standards are in Master of Defense. You will have three towers to start with, air, ground, and combination air/ground. Later you will gain an air balloon that drops bombs. For each monster you kill you will be awarded gold that can be used to purchase more towers or upgrade existing towers. On top of gold, you will also receive experience points. Experience points can be used to upgrade various aspects of gameplay as well as unlock special abilities. You can upgrade Plant towers with a poison effect, upgrade the damage done by all your towers, and unlock an Ice tower. At the end of each wave you will be awarded gold for remaining villagers. If any monster makes it to the town it will kill villagers. Once all your villagers are dead the game is over.

Boss Monsters Can Be Tough

Regular monsters get harder as the level progresses but occasionally a wave consists of one monster with a large amount of health. These monsters are nearly impossible to kill and wreak havoc on your town killing 10 or more villagers. When you only have 100 villagers to get through all 6 levels this can be very frustrating. That brings about another issue, there is no way to replenish your villagers. Once they are dead they are gone until the end of the game. While this makes the game challenging it can also make the game nearly impossible to beat for newcomers.

Master of Defense is a great TD game. While it does have a few issues the graphics and challenging levels will make it interesting for even the best TD players. Upgrading you towers to keep up with the enemies expanding health meters means you have to use your gold strategically and place your towers well. Anyone can play this game and enjoy, but newcomers will need some practice before they can beat the game entirely. 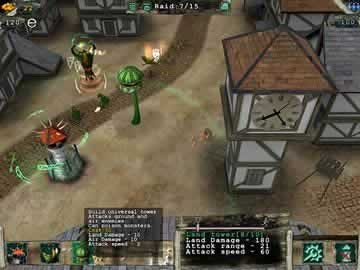 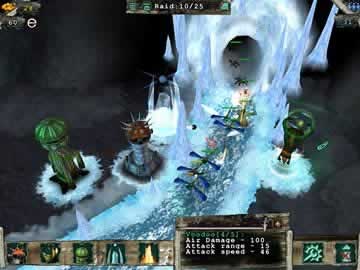