Relive the Historical Action and Military Strategy of the Civil War in American Civil War: Gettysburg! 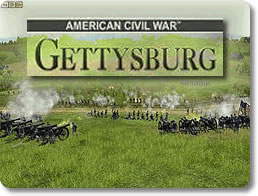 The time: July, 1863. The place: Gettysburg, Pennsylvania. The event: one of the most important and momentous battles in all of American history!

Travel back in time to an era when the very fabric of American society was ripped in two. The Civil War pitted brother against brother and father against son as the North and South fought all-out war, and now it's up to you to take sides in the famous battle which became the turning point of the entire conflict!

Play as the North or the South

As the Confederates, stand up for your rights as sovereign states against the Northern Yankee aggressor. As the United States of America, fight to put down the rebellious Southerners and preserve the Union. Whatever your decision, be ready to sacrifice everything for your country!

Exciting and Fun Strategic Game Play for the History Buff or the Beginner!

In each mission, control your armies of infantry, cavalry, and artillery in an effort to complete specific objectives. You'll learn to make use of cover, supporting fire, flanking movements, and different marching formations to defeat the enemy.

Simultaneous turn-based gameplay in American Civil War: Gettysburg makes it easy to map out the perfect strategy and win victory for yourself and your cause!

The game carefully covers all the most famous military actions of the epic three-day battle. Cemetery Ridge, Devil's Den, Little Round Top, Pickett's Charge, and more are all beautifully brought to life with 3D battlefields and armies. It's all made possible by the detailed graphics and lifelike animations of American Civil War: Gettysburg!

Every part of the game is tailored to historical accuracy: the familiar blue and gray uniforms, flag-carrying soldiers, realistic firing, reloading, and movement animations, and much more!

Once you've mastered the single player campaign in American Civil War: Gettysburg, take your leadership abilities online and test your skills against other armchair generals over the Internet.

You can also play a local game against a friend at any time, on any of the game's scenarios!

As if that's not enough, try skirmish mode for another challenge. You set the amount of money each player receives to buy units with before the game starts, and then it's a one-on-one battle for supremacy!

Historical Learning Section is Great for Kids and Adults!

Want a little background info before (or after) you start playing? That's easy, because American Civil War: Gettysburg includes a history section for that exact purpose.

Learn about Generals Robert E. Lee, George Meade, Jubal Early, and the rest of the men who shaped the events of July 1-3, 1863. View photographs and paintings of all aspects of the battle. You can even read complete texts of famous Civil War speeches and documents like the Emancipation Proclamation and the Gettysburg Address!

American Civil War: Gettysburg immerses you in the rich history of this momentous time in the United States, when the fate of the entire country was decided forever.

Experience a part of American history and download American Civil War: Gettysburg, one of the finest Civil War games ever made!

American Civil War: Gettysburg is a turn-based strategy title which puts you in command of the South or North during many key engagements during the Battle of Gettysburg. Take up the flag of the Confederacy or check Southern aggression with the Union in many historic missions, such as Picket's Charge and the defense of Little Round Top.

The gameplay is rich in strategy with flanking, height advantages, and different unit types, yet keeps things fairly simple and the interface is crisp and easy to use. The tried and true turn-based action plays out on maps that are divided in classic war game hexagons, and you really get to examine the field and issue orders to place your units where they can be most effective.

What makes this title really stand out is that once you issue your orders and end your turn, you get a vibrant 3-D rendition of your units as they follow those commands. You can watch as your quick moving columns spread out into line formations, see individual soldiers fall under musket volleys, or hear the the hoof beats of your charging calvary. These all add together to make combat quite exciting and it is really nice to actually see how your tactical choices affect the battles.

Some war gamers might be a little put off by the fact that every unit serves a clear purpose during a mission and most missions play out in a relatively small area. Don't expect to be commanding huge forces, managing resources, or any kind of diplomacy as the action is a bit more simplified.

Also, there were some confusing instances concerning the outcomes of some of the battles. It was quite puzzling to see non-entrenched infantry putting up a surprising fight against fully covered troops or calvary being utterly decimated by cannons. This may have been put in there to replicate the unpredictability of war but it can get a bit distressing when such instances throw a wrench in your carefully laid out plans.

With a rather long campaign, skirmish mode where you can battle on mission maps with units of your choosing and have the option to allocate points to either side to customize the conflict, and multiplayer option, there is plenty of gameplay to be found with American Civil War: Gettysburg. The straightforward strategic elements, nice 3-D action scenes, and easy to use controls make this a great title for players who are new to turn-based action games and has enough depth for more seasoned players.

While this game may not be for everyone out there, it is definitely worth giving a try and is a decent addition to fans of this genre.

Watch highlights from the game including troop battles and some of the civil war history elements in the game. 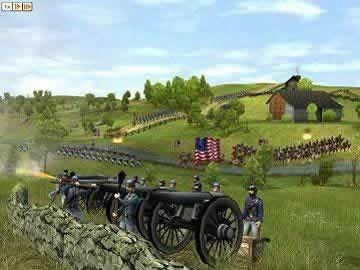 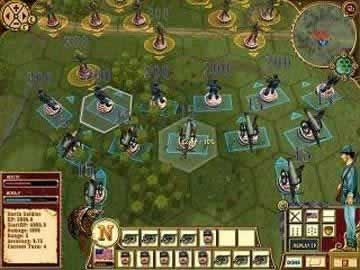