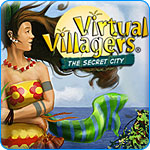 Uncover the secrets of an ancient city on the northern shores of the mysterious island Isola.

Explore a new part of the island

After many years of happiness and prosperity on the western shores of the island, your village population has grown and it is time to expand.

Your villagers build a raft and select a small family with children and some trained builders to explore the island. At first the breeze is steady but suddenly the wind stops completely. All at once the sky darkened and a wind comes out of nowhere! Their little boat seems guided by an invisible force! Just as the boat starts to scrape against a shallow reef the villagers see a new shore and the wind dies off just as quickly as it materialized.

Confused but relieved, they pick themselves out of the broken pieces of their raft and collected their senses. A new shore! But this was not an empty shore...they could already see wrecked huts, an enormous broken statue...buildings... a secret city!

Just like before you must help establish your new village by having children, building living quarters, discovering new food sources, and best of all, uncovering the secrets of the ancient city. Set your villagers to work on a number of tasks to advance the community and find all the secrets!

Control Your Villagers and Uncover Secrets

In Virtual Villagers: The Secret City, you get to control the lives of your villagers and their children while you investigate the mysterious secret city. You are responsible for building shelter, gathering food, researching new technology and much more. The villagers will have to learn skills to gain healing skills and to solve other mysteries in the area. All this is going in real time, even when you aren't playing.

You start the game with a brief story about the expanding population of your village and the necessity to expand. A team is picked to set out and settle a new village. The team sets out in a raft and is pushed by mysterious winds to the beach that contains the secret city. The ruins of an ancient city including a broken statue and several destroyed huts is the foundation for your new village.

You will need to tell your villagers to perform tasks like gather food, research and build. The longer a villager performs a task the better they get at it. The villagers will continue doing what you have told them to most of the time, but occasionally they will explore or eat. The other goal besides staying alive is exploration. There are several mysteries that you need to solve as well as things that will help your villagers out.

Controlling the game is very simple and only requires the mouse. To start a villager on a certain action you hold down the left mouse button on them which will pick them up and drop them near the activity you want them to perform. Tech points and food are the only consumables in the game. Tech points are earned by scientists and can be used to upgrade things like medicine, alchemy, science and even restoration (this helps you rebuild the city). Food is gathered or grown and feeds the villagers when they are hungry.

The villagers will eventually age and die so you will need to continuously replenish the population with babies. Children won't work until a certain age, but they still consume food and resources. There are several challenges to accomplish. Some of these are things you will accomplish by advancing in the game but some require you to explore and solve mysteries.

While this game will entertain you for a long time, you can't play it for much more than half an hour continuously without getting bored. Since you only need to tell the villagers what to do and they will keep doing it, your interaction is fairly minimal. This game is best played in small bursts and then letting things progress while you are away.

Overall Virtual Villagers: The Secret City is a great game that will entertain you for a long long time. Playing in short bursts means you won't have to spend all your time playing and having things progress while the game is off makes it interesting. Easy controls and a family friendly theme makes this game playable by anyone.

With plenty of upgrades and mysteries this game is well worth the time.

Developer created video showing clips and features from the game. 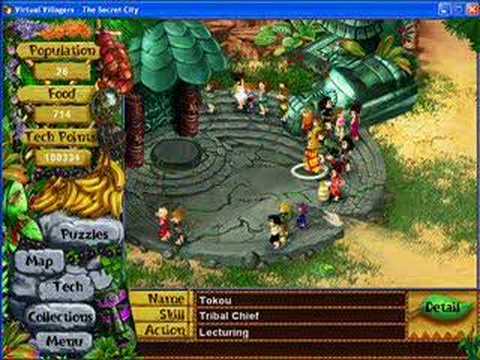 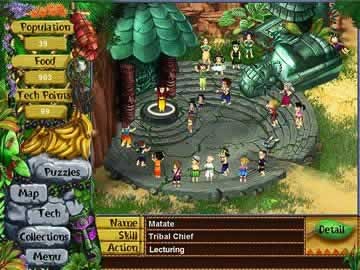 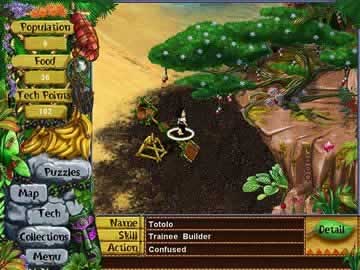