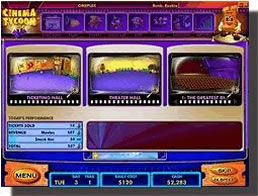 Start from a small theater and grow into a huge Mega-Plex!

You have gone to the movies hundreds of times. You know what makes you frustrated and what makes you happy. It is time to put this knowledge into action with Cinema Tycoon!

Decide on all aspects of the business including concession costs and which movies to show. You are in charge of this theatre - learn how to make it profitable by making good decisions!

Do you know what movies will do well? In Cinema Tycoon, avoid the flops and promote the hits. If you are going to be the next Cinema Tycoon, you had better pay attention! Your competition is watching and without your continued focus, you may go out of business. Learn this exciting business model without actually having to out all of the real capital to make it happen!

Cinema Tycoon Gold is a business simulation game that will have you develop a single- screen movie theater into an 8 show million dollar megaplex. Through upgrading your theater's snack bar, improving your staff, and playing what's “hot”, you can turn your down and out theater into a successful and profitable business.

A Few Ways to Play the Movie Business

Cinema Tycoon Gold is divided into four game modes, one being a helpful tutorial that will quickly guide you through the game. The other three games modes have different objectives, but are essentially the same game. Your playing style will not have to change between modes and the means by which you reach the objectives are constant. The first of the modes is Mogul. In this game you start with a one screen theater and 1,000 dollars in pocket. It becomes your goal to bank 1,000,000 dollars. You will start off slowly, typically making around 1,000 dollars a day, and by upgrading your theater you will increase your daily profits (up to almost 100,000 dollars a day). Upgrades that increase profits range from adding a snack bar to improving the speakers and projectors. The more upgrades you can add to your theater the more efficient your show will run, thus making you more money.

The other two modes, MovieCzar, and Cinoplex, again have the same style of play as Mogul. In both you start with 1,000 dollars and a single-screen theater you must upgrade to earn more money and advance. In MovieCzar your successes will moves you up in rank, ultimately leading to the title “Czar,” while in Cinoplex your objective is to have an eight-screen theater. Both modes are enjoyable, yet gameplay in both are nearly identical to that of Mogul.

Not Much Variety Between Modes

Like mentioned before, the game's simple nature and overall easy game play make this a fun game. However, aside from this there are a few notable drawbacks. The first being ease of play and re-playability. This game does have 3 difficulty settings, however, because the game and the ways to succeed are the same, having varying difficulties doesn't change too much. Also, because the modes are all relatively the same with slightly different objectives, playing the second and third mode after the first can be boring. You will not notice any difference mode-to-mode which can make things monotonous.

Conclusion - Good But Check Out Other Cinema Tycoon Titles

Overall, Cinema Tycoon Gold is a pretty good game that succeeds on it's gameplay, but doesn't do a nice job of expanding upon that play with different levels or modes. Playing is enjoyable, but replaying is probably not something you will want to do. If you are a movie enthusiast and love simulation games you should try this game's counterpart, Cinema Tycoon 2 first. Cinema Tycoon Gold is not bad and I recommend the trial, however, you should explore other avenues in this genre as well. 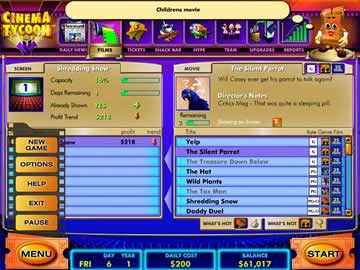 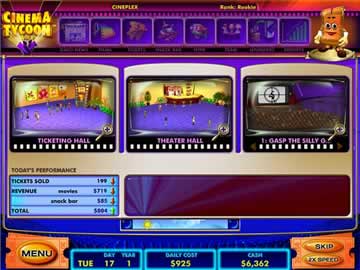