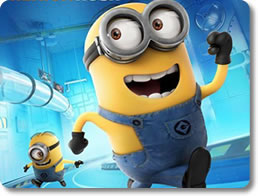 Every time a popular movie comes out with a lot of hype to back it up, a slew of games based on it follow in short order. Whether you're dealing with a big-budget AAA console title or a free mobile game, the results are almost always less than ideal with few exceptions. The good news is that Minion Rush, a spin-off game based on the Despicable Me movie franchise, is one of those few exceptions. While it's an endless runner that doesn't really do a whole lot that's new in this well-tread genre, it makes remarkably good use of its license to create something that is every bit as fun to play as it is to watch.

The graphics are undoubtedly going to be the first thing you notice about Minion Rush. They look good. In fact, they almost look as good as the movie. While the resolution isn't as high and the details aren't as intricate, there's still a lot to enjoy. The backgrounds are colorful, expansive, vibrant and a joy to blaze through, but as it is in the films, it's Gru's minions that steal the show. Care was given to make them as animated and expressive here as they are in the movies. They laugh, they chuckle, they scream, they argue, and they smack each other silly in that funny gibberish language of theirs. Most of all, they work remarkably well in this kind of game.

Endless runners naturally have a lot of slapstick, which is a brand of comedy the minions are often subjected to. It's fun to see the little guys suffer so much abuse, whether they crash into a rocket, fall down a bottomless pit, or get zapped by electricity. The folks over at Gameloft also made sure to give the minions as many animations as they could to keep things fresh. Crashing into an obstruction can yield multiple ends that are chosen at random, and they will even continue to emote while running normally. Sometimes your guy will glance back with an excited smile. Other times, he'll let out a startled yelp. Even the menu screens are a hoot to watch, for the minions don't cease their antics even then. The presentation of Minion Rush is fantastic all around and it does an excellent job adapting Despicable Me's sense of humor to the hand-held screen.

Everything You Should Expect

You only need to hear the words "endless runner" to know what Minion Rush is all about. Your minion runs through a never-ending three-lane course rife with hazards that must be avoided by jumping, ducking and simply dodging at high speeds. All controls are done via the touch screen. A swipe to the left or right will move the minion to a lane in that corresponding direction, an upward swipe will make him jump in the air, and a downward one causes him to slide underneath overhanging obstacles.

Hazards can include stray rockets, bottomless pits, bombs, laser tripwires, trees, rocks, cars and whatever else gets in your way. What things you deal with change in each level, of which there's a decent variety. You'll set the minion loose through Gru's Jelly Lab, the surrounding neighborhood, the jungle, the carnival, the beach and Vector's fortress. None of these areas make any serious alterations to the gameplay, but they all look so distinct from one another that you probably won't care. The app definitely feels more varied than most endless runners in any case, which have a tendency to just stick to one environment.

As far as the basics go, there's little to complain about. Minion Rush won't revolutionize the endless runner genre anytime soon, but it covers all the bases competently. The controls are sharp, the pacing is crisp, and there's enough danger going on that you have to stay on your toes at all times.

And a Few New Things

Even so, Minion Rush does implement a few neat things that mix up the old formula. For instance, it will frequently swing the perspective around to either the side or the front for certain situations where seeing what's ahead of you isn't very important. It's a simple thing, but it does help make things more dynamic. There are also sliding sections where you control the minion's movement by tilting your device. They're scattered and brief, but they break up the running nicely in a fun way. The game also lets you commit "despicable acts" by kicking your fellow minions around. They tend to meet ends that are just as amusing as what you're going to typically deal with, and their presence will often require you to make some interesting strategic calls; for instance, you can boot a minion off the track, but in doing so, you'll pass up on some bananas, which are used to buy things from the in-game store.

However, perhaps the coolest addition to the endless runner that the Despicable Me game implements are the boss fights. At the end of every major level, you'll get pursued by an adversary that you just can't run away from. For example, the first boss you face will be Gru's rival, Vector, who deploys drones on the track that your minion must avoid. However, some of the drones are small and weak, and if you're able to tap them, then you'll throw them back at Vector until he goes down. The bosses aren't complex, but they shake things up without changing the way an endless runner should be played.

Like all good runners, Minion Rush offers a nice selection of power-ups. Some of them are the usual fare. The Banana Vacuum acts as this game's version of the currency magnet that is frequently seen, and Gru's Rocket is the resident obstacle-bypasser.

However, the setting also allows for some more exotic abilities to be used. For example, there's the Freeze Ray, which shoots out a steady stream of frost that freezes everything into an easy-to-break chunk of ice. However, the best power-up is probably the Mega Minion, which turns the player character into an enormous juggernaut that's capable of crushing everything in his path, namely other minions on the track. It's a treat whenever you get a hold of this; watching your avatar sadistically stomp everything into dust never gets old.

Another neat addition that Minion Rush adds is Minion Race mode. This takes the endless runner formula and gives it a multiplayer spin. You and two other players race against one another on a three-lane track to the finish line. It plays and controls the same as the regular game, with two caveats. The first is that there are no instant-death traps; everything you hit just slows you down. The other is that there's a variety of new weapons and gadgets you can use to give yourself an edge, like jetpacks, tasers and fart guns. Minion Race lets you play dirty, and it's fun for that reason alone.

Sadly, an energy meter of sorts is utilized to limit how often you can experience it. If you want to play it again and again, then you'll either have to wait for it to recharge, or be willing to pay out some real money. Sticking what might be Minion Rush's best feature behind a paywall just feels plain tasteless. One can only hope that we will see more games of this nature in the near future.

No Pay Raise for the Minions

Gru may be a generous boss to his minions in the movies, but this game sure isn't. Besides bananas, there's a secondary currency in the form of tokens. Tokens are needed to buy certain upgrades, revive your character on a run that goes bad, or recharge your energy meter if you want to play more Minion Races. The average cost for most things that use tokens is usually around 50, and the game is incredibly stingy on giving them away; you'll be lucky if you can get five a day. The only really dependable method to acquire tokens is to either buy more with actual money, or pester your friends on Facebook, neither of which are very ideal solutions. Minion Rush may be a free download that needs to make money somehow, but the prices it's asking could definitely be a lot more fair.

In the end, while Minion Rush can be a tad expensive should you actually feel the need to pay for it, you can still enjoy it as a completely free game and experience most of what it has to offer without paying a cent. It may seem like just another free runner in a market that's oversaturated with them, but it does everything the genre is known for remarkably well. It looks fantastic, it's a lot of fun, it's polished, it's funny and brimming with personality, and it throws in just enough new twists to make things interesting. Minion Rush is a great game that everyone should check out. Only those who can't stand the Despicable Me franchise or the minions should stay away. 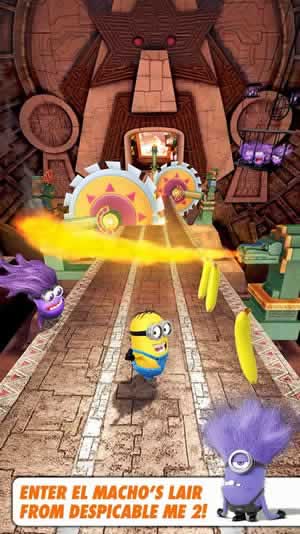 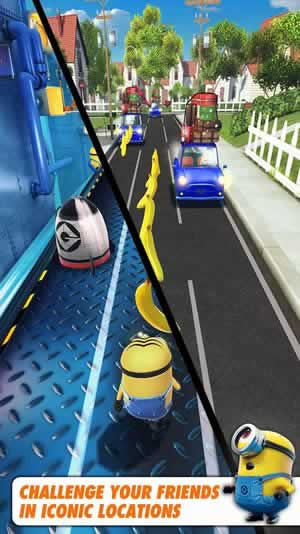