Candy Crush Saga was one of the most unexpected hits at its time of release. It squeezed its way into the crowded match-three subgenre of puzzle games and somehow became one of the most dominant forces in the mobile game market over time. That's not to say it was bad. On the contrary, Candy Crush Saga was indeed a very solid game that worked amazingly well and put a new spin on an old concept. It's just a little hard to believe that a game from such a well-tread genre with an un-ironically cutesy art style would be so popular, but that's just how the cookie crumbled.

Candy Crush Soda Saga is the sequel, and it's safe to say that it retains that same level of charm and challenge. That's both good and bad. Like its predecessor, it's fun and the puzzles can be real mind-ticklers at times. However, its difficulty can sometimes get overly harsh as well.

If you've played Candy Crush Saga, then you should be at home here. It's just as bright and colorful as before. A new protagonist named Kimmy has taken over Tiffi's role, but this is still Candy Crush as we know it. The Candyland-inspired aesthetic makes the whole thing look childish, which will inevitably rub a lot of people the wrong way, but don't ever let it be said that King's artists are lacking in inspiration. They knew exactly what kind of look they wanted their game to achieve and they made it. The way characters are depicted as paper puppets is as nice a touch now as it was then.

Meanwhile, the general gameplay visuals should be more universally appealing. All the candy treats you match up look quite tasty on the screen, and it's easy enough to tell them apart even when they look so small. However, it's the frequent explosions you'll witness that will really steal the show. The special candies you will undoubtedly utilize create all sorts of impressively-animated color flashes that make this particular match-three game a lot more satisfying to play than most of the competition.

The music is pretty good as well. It's relaxing and does nothing to distract from the candy-matching. The soundtrack does sound strangely more grandiose than a confectionary-themed puzzle app should, but it's a pleasure on the ears nonetheless.

Most of the Same, Some New

Like the graphics, there's not a whole lot to Candy Crush Soda Saga that will seem foreign to its many candy-smashing veterans. You swap various candies around on a board to put them together into groups of three, removing them from the screen. It's simple as it ever was. Unlike most match-three games, you've got a limited number of moves at your disposal, so you need to consider your actions carefully.

Another area where Candy Crush breaks the mold is in the way you can create special candy. Matching three confections is all well and good, but if you want a chance at completing each level under par, then you need to do more than that. Matching four candies together in a line creates a striped candy which can clear out an entire row. Matching five together in an L-shaped formation creates a wrapped candy, which has a wider explosion radius when it's crushed. Grouping five treats in a row creates a powerful color bomb. The list goes on. The meat of Candy Crush's strategy lies in creating and using these special treats whenever you can.

Soda Saga makes no sweeping changes to the formula. It instead opts for smaller additions here and there. For one, it adds a few new special candy types. The first is the Jelly Fish. While these did appear in some capacity in the first game, Soda Saga lets you make them anytime by matching four candies together into a box formation. Another type can alter the color of most candies on the board, and it can only be formed by matching seven treats in a row. It's a neat addition, but due to the strict requirements to get it, you'll seldom ever make use of it.

Perhaps the most significant change Soda Saga makes is with the addition of soda. Many levels contain a few bottles of everyone's favorite carbonated drink. Bursting them causes the stage to fill up with soda, which causes new candies to enter the grid from the bottom of the screen instead of the top, provided they are crushed within the soda. Popping more soda bottle causes the liquid level to rise. Depending on how the stage is designed, it's often advantageous to burst soda bottles, even when the end goal is not to simply destroy them all.

There are a few other changes here and there. Some levels require you to uncover lost gummy bears that are hidden within ice. Others have you guide a bubble bear all the way to the top. These new goals and mechanics are interesting, fun and they keep things from growing repetitive, but it's still more of the same overall. That isn't a bad thing by any stretch of the imagination, but prepare to be disappointed if you were expecting more.

If there's one thing that you have to watch out for in Candy Crush Soda Saga, it's the difficulty. Just like its predecessor, it starts out reasonable enough, introducing new mechanics at a steady pace to keep you from feeling too overwhelmed. Sooner or later, you'll hit a wall that no amount of swapping will get you through. After blowing through every life you have, you'll be left with a difficult choice. You can put the game down and wait for your lives to replenish, pester your friends for extra lives, or break out your credit card. If you have no friends that play Candy Crush Soda Saga, then you're going to be stuck in a lose-lose situation. Waiting could ruin the strategy you had in mind as you could forget the level's intricacies, and spending money isn't going to guarantee that you'll get past the current stage you're banging your head against.

It doesn't help that like most match-three games, luck plays a large part of Soda Saga's gameplay. You have no idea what kind of candy will come in or how it will be arranged. You might struggle to find any decent matches in one try, while another could have you get one special candy after another in rapid succession. Regardless, getting far in Candy Crush Soda Saga will require a tremendous amount of patience that not everyone will have.

Despite its flaws, Candy Crush Soda Saga is still a fun puzzler that's just as addictive as most tooth-destroying confections are. While you will become frustrated with it eventually, there's no arguing with the fact that you can play Candy Crush for free. At the very least, it's not a bad idea to just see how far you can get. 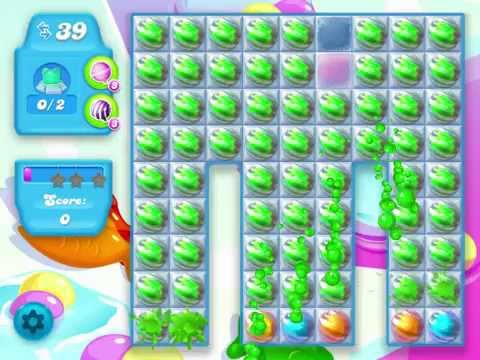 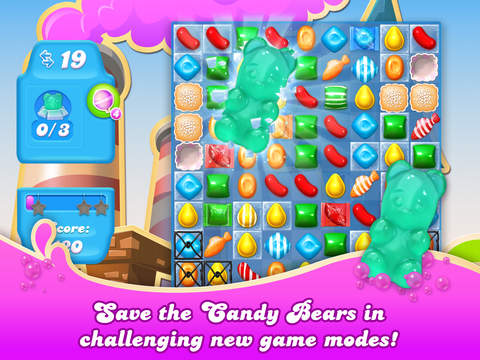 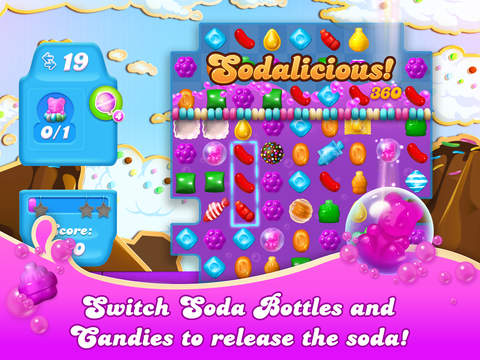