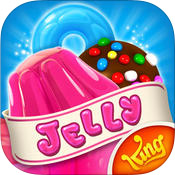 A Trilogy is Born

Is anyone really surprised when a new Candy Crush game hits all the app stores? Alongside Angry Birds, it's one of the biggest hallmarks of mobile gaming, taking one of its most crowded genres, doing a few very unusual things with it, and likely making everyone who plays it very hungry in the process. Enter Candy Crush Jelly Saga, the third chapter to King's best-selling series of match-three puzzle games. While it throws in a of couple new twists to the formula that are admittedly very cool, it's still the same thing everyone played in 2012 and 2014 with the original game and Candy Crush Soda Saga respectively. That's both good and bad, for while it retains the series' addictive nature, it also continues to be tooth-grindingly frustrating at times.

The first thing you'll notice about Candy Crush Jelly Saga is that the visuals have gotten a bit of a revamp. They're still as bright, colorful and sickeningly cutesy as ever, but they they're much more crisp and sharp. The general art style has also been tweaked; the paper puppet motif that was prominent in the previous games is notably more downplayed, and the characters are made to look more animated than ever before, complete with facial expressions that were mostly absent in the past. Jenny, the protagonist of Jelly Saga, definitely looks like she belongs in a different world from the first game's Toffette.

Perhaps the most impressive thing is the way the level map is handled. The previous Candy Crush games merely featured an overhead map that looked much like a children's board game like 'Candy Land'. Jelly Saga does something similar, but from a more first-person perspective. You follow the road between levels by scrolling forward, passing by various characters and scenes as you go. It's a minor detail, but it looks very nice and suits the pop-up book visuals very well. The artists deserve a lot of credit for making it.

Besides that, there really isn't much else to say. The game's presentation is passable. The music is soothing but forgettable, and the explosion sound effects that go off as you crush candy are satisfying to hear, but they're ultimately nothing you haven't heard before. The sound design gets the job done, even though most of it feels recycled.

If you've tried your hand at any Candy Crush games in the past, then you'll instantly be at home with Jelly Saga. Playing it is as simple as matching three candies together and crushing them. At least, that's what many would wish it to be. Candy Crush Saga has always been infamous for its surprisingly high level of difficulty, and this app is no exception. Unlike most match-three games, you have a limited number of moves to make in each level, and if you expend them all, you lose and have to start over. Hence, reaction time is not as important as it is in your typical Bejeweled copycat. Making strategic matches is the order of the day here.

If you want a chance of making any headway in Candy Crush, then the key is to match candy in certain ways and create special candy treats. All the old favorites are here. You've got the striped candy that clears out an entire row or column, the wrapped candy that blows up all surrounding confections, the color bomb that eliminates all candies of a matching color on the screen, and so on.

Making these bad boys and setting them off never gets old, and combining their effects is immensely satisfying, but there's always a flip side. Just because you can make a special candy doesn't mean you'll always get to use it. Sometimes, the process of making or using a special candy at all may not be particularly strategic either. Luck has always played a huge role in the Candy Crush formula, and that's not always a good thing in a game that's as tough as this. The puzzles get hard very fast, and the level of difficulty often fluctuates; getting stuck on a single level is not only inevitable, it's considered a matter of course in the Candy Crush series. If this is something you've considered problematic in the past, then be forewarned: Candy Crush Jelly Saga does nothing to address it.

Some New Things to Consider

That aside, Jelly Saga isn't just more of the same. It throws in a few new twists, some of which are pretty good. The first and most interesting of these is the inclusion of boss levels. From time to time, you'll go up against a figure called the Jelly Queen. Both she and you take turns matching candy on the board, and to beat her, you need to wipe out all traces of the green jelly she spreads with every match she makes. These stages require a very offensive mindset, since jelly can spread exponentially across the board if it's left unchecked. Besides that, there's another thing you have to consider: stunning her. Making special candy will knock the Jelly Queen out, getting you another turn. However, you have to take care, for she can use special candy and knock you out as well. Boss levels display a level of dynamism unheard of in the match-three genre, making them a very welcome addition to the Candy Crush formula.

A more subtle change comes in the general level structure of the game. As the name of the app implies, jelly levels are given a much greater emphasis, to the point where they are the default puzzle to solve this time around. While there's nothing wrong with that per se, it does have an effect on making you question the quality of your moves. Forming combos isn't as important as doing widespread damage, but the latter is harder to predict and plan for than the former. If jelly levels were the bane of your existence in the previous apps, then you might want to stay clear of this one.

The final new type of puzzle to keep in mind for Jelly Saga is the Puffling stage. In these levels, you need to break apart the thick layer of frosting and uncover the worm-like Puffling creatures within. These are really more tedious than anything, particularly since not only do the Pufflings move around, but the frosting needs to be cracked multiple times before it's removed. These stages seem like they were designed to waste your turns, which makes them the least fun things to do.

Conclusion: For the Fans

Overall, Candy Crush Jelly Saga is ultimately more of the same. It emphasizes some aspects of the series, downplays others, and includes some fun new stuff in the boss levels. However, it does nothing to fix the underlying problems that plagued the franchise since the very beginning. If you enjoyed Candy Crush Saga and Soda Saga for what they were, you'll love Jelly Saga. If you didn't, then this won't change your mind. 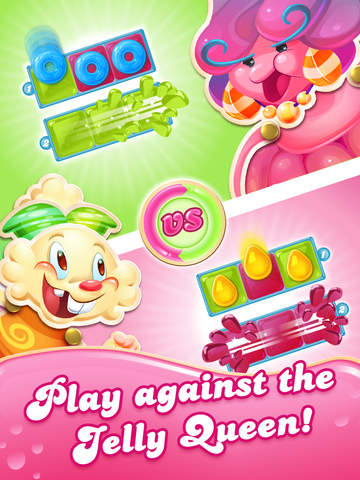 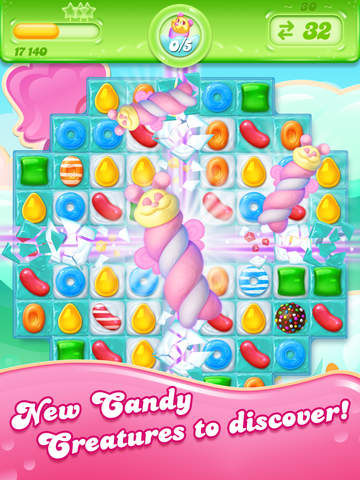