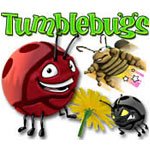 Spin and Shoot Colored Bugs to Free Them From the Evil Bug King!

Save the Bugs From the Evil Bug King!

The Black Bugs are trying to make all the bugs their slaves! It's up to you to save them!

Fans of Zuma and Luxor will enjoy this game because it has similar exciting gameplay with unique features.

Shoot Balls at Groups of Bugs to Free Them

You must launch colored balls and match them with the colored beetles that are being marched toward slavery. When you make a match of three or more of the same color, the bugs are freed. Free all the bugs on a level to move on to the next level.

Watch out for tough timed levels, levels where the bugs move faster and levels with two lines of beetles moving toward slavery at once. Enjoy awesome power-ups that are unique to this game like Ballistic Bugs, which lets you lob shots over rows and reach bugs you couldn't before.

Another fun feature is that on many levels you will have the ability to jump between multiple shooting platforms and take shots from different angles.

Fast-Paced, Addicting and Tons of Fun!

Tumblebugs is one of those games that hooks you with its easy-to-learn gameplay while offering a rewarding challenge. Enjoy the excitement of making rapid fire matches to free the bugs as soon as possible! You'll also improve your hand-eye coordination by practicing precise shooting and learning to recognize color patterns quickly.

If you enjoy fast-paced matching games then play Tumblebugs now!

Tumblebugs is an an exciting puzzle game that places you in control of the hero Tumble as you try to save the colorful beetles from being enslaved by the Black Bug Empire. The only way to set them free is by matching beetles of the same color in groups of three or more. The gameplay should be familiar to anyone who has ever played titles such as Zuma and Luxor. You can take on a variety of levels in Story Mode, or see how long you can hold out against an endless chain of beetles in Time Trial. Great graphics and sound make a great game even better. This addicting game is simple enough for anyone to play, but still packs quite a challenge.

The gameplay in Tumblebugs is very similar to that of games like Zuma Deluxe and Luxor. You control Tumble, a bug that can fire colored beetles from its mouth. Tumble holds three beetles, often different colors, that you can easily switch between as well. This gives you the ability to save some beetles or switch to one that will give you a match right away.

Tumble is placed in a fixed location on each level, with a winding path that leads to a hole. A chain of colored beetles is being pushed towards this hole by a black bug. Your goal is to free all the colored beetles from the black bug's control by matching them in groups of three or more before they reach the hole. Failing to do so will cost you a life and force you to restart the level.

As you match beetles, you'll often earn powerups that add some excitement and strategy to the game and can be very helpful in freeing the beetles. You'll be able to get powerups that make the chain of beetles move in reverse, free a bunch of them at once, let you launch them through the air, and even more. Gameplay isn't very difficult or complex, but the game does get quite challenging as your progress.

70 Levels With Unique Paths, Sometimes 2 At Once

There are over 70 different levels in Tumblebugs, each with a unique path for the chain of beetles to travel. Some levels even have two chains to deal with. Some levels take the path through tunnels you can't fire balls into, or a path that winds around Tumble and blocks your line of fire. There are also levels that give you the ability to teleport Tumble between two spots, to get better shots and deal with multiple chains. The levels range from the simple and easy to the extremely complex and challenging. The biggest downside is that despite the differences and changes that occur from level to level, there isn't much variety in the action.

Tumblebugs does provide two different modes of gameplay to add a bit of variety and challenge. Story Mode takes your through the various levels and temples the game offers, which are then unlocked for Time Trial when beaten. Time Trial has similar gameplay to Story Mode, but with a few changes. Rather than advancing through levels, you select only a single level to play on. You play your selected level with an endless chain of the coloredbeetles. Your goal is to last as long as possible before the increasing colors and speed of the chain overwhelm you and finally reach the hole.

The difficulty level in Tumblebugs starts low and continues to ramp up as you progress through the game. You start with slow moving chains on simple paths and only a few beetle colors to deal with. As you beat levels, the speed of the chain and complexity of paths continue to increase (and some levels have you dealing with two chains, a challenging task). The number of colors you need to deal with slowly increase as well, with many different colors to manage.

Unfortunately, Tumblebugs does not provide any options to change the difficulty level. Such an option would have been a nice addition to improve the game for players finding it too hard or too easy. However, the Story Mode should provide a good challenge for most players, while Time Trial can provide a tougher challenge for more experienced or hardcore players.

Tumblebugs has simple controls that are easy to learn and use for players of all skill levels. You turn Tumble to aim balls using the mouse. You fire the balls with a simple click. You can switch between the three colored beetles held by Tumble using the right mouse button. On levels where you can move Tumble between two points, you can move him by using the space bar. Playing the game is as simple as that.

Tumblebugs does a great job when it comes to presentation and the theme. The visuals all fit well in the bug-centric story/theme. The background art for levels, the designs on the colored beetles and of Tumble, and even the little hole the beetles try to reach on each level all help build a consistent and immersive theme.

The music and sound effects also fit perfectly. There are also sound cues that let you know when something is happening. For example, you'll see and hear warnings as the beetles close in on the hole. Other sound effects will alert you when you get a bonus or powerup. When you put it all together, it is a great addition to this game.

Conclusion - One of the Best Chain Matching Games Available

Overall, Tumblebugs is an excellent game that will be enjoyable for fans of games like Zuma and Luxor. There are a ton of levels to take on that provide a variety of challenges. The controls and gameplay are simple enough for anyone to pick up and play. Multiple modes provide different experiences and types of play. Working towards bonuses or grabbing powerups adds to the excitement. Great presentation makes an already great game even better.

There isn't a great deal of variety when it comes to the action, but that's not unusual for this type of game. Whether you're a puzzle player or not, this game is one that's well worth playing. 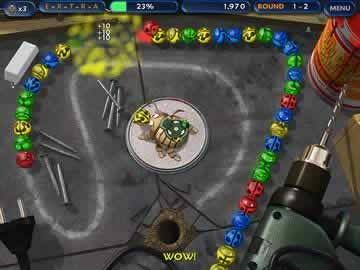 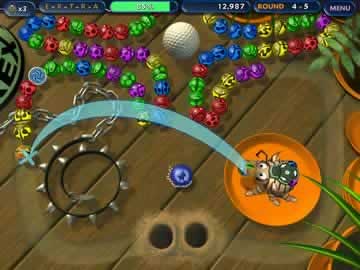