Creative puzzle game where you build and advance a character by defeating enemies at match 3 puzzles. Huge adventure!

Puzzle Quest: Challenge of the Warlords is not your average match 3, Bejeweled type game. For the first time role playing and puzzle games meet in a unique and fun blend that is a great change of pace.

You start the game by selecting a class of character like a knight, druid, or wizard. Battles in the game are non-violent and take place on a grid of gems like Bejeweled. As you make matches, you earn mana (which is magic power) and can cast offensive and defensive spells on your opponent to help you win. You also earn experience points during the match that can be used to upgrade your character's abilities.

If that were all Puzzle Quest had to offer, it would still be good. However, not only do you upgrade your character, you can upgrade hometown citadel with offensive and defensive capabilities. You can capture cities which give you tax income from its citizens. Build a mage tower and learn spells from enemies. Create a stable and train monsters to help you in battle.

If you enjoy the match 3 type of puzzle gaming, Puzzle Quest will be a fun breath of fresh air. Give the free trial download a shot and enjoy this unique game.

Puzzle Quest can best be described as a game of head-to-head Bejewled with a mixture of role-playing game elements.

Character Classes Affect How You Play

You start things off by picking a character class, be it a Druid, Warrior, Knight, or Wizard, which affects what kinds of spells you can specialize in and what form or color of mana you'll get the most out of when casting those spells in combat. This is perhaps where the game is most appealing in that combat occurs with a Bejeweled board, or simply a grid with different colored gems. By making matches of 3 or more similar colored gems you can perform different actions, such as gain green mana for casting spells, collect gold coins or purple experience stars, or inflict direct damage on your opponent by linking together a row of skulls.

This all adds up to some rather addictive gameplay and you actually feel the need to strategize each turn as you try to collect the right kind of mana to utilize your spells while keeping your opponent from forming the strings he needs. Play continues until either combatant's health reaches zero, but don't fret because there is a very nice feature to the action in that if you are the one to lose you still retain all the experience you gained during that match and simply flee the battle to face them again if you wish. This is a great convenience because there are many monsters which may be too difficult to combat until you expand your party or gain better items, it really keeps things from getting frustrating.

Characters Can Be Upgraded

Additionally you can further customize your character by allocating skill points every time you level up or make upgrades to your citadel that allow you to train monsters to be a mount or learn spells from captured enemies. You can also expand your empire by defeating strong enemy castles and gain additional taxes from the citizenry.

Overall Puzzle Quest does an excellent job of mixing both the match 3 and RPG genres with gampelay that is deep and customizable enough for hard-core RPG fans yet streamlined enough for casual players to enjoy as well. The only issue with this title is that the online multiplayer only supports LAN and peer-to-peer play so it can be hard to find matches, but the strength of the single-player gameplay more than makes up for this fact. At the very least download the demo and give this game a try to see if this unique gaming mixture is for you.

Publisher created game trailer with various clips from the game. 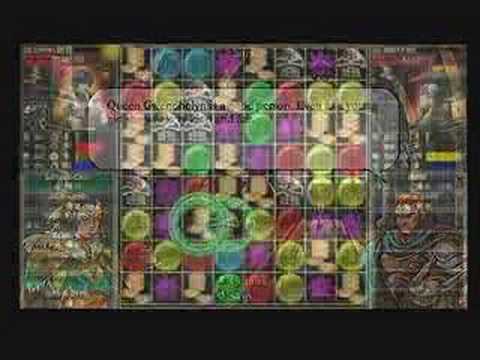 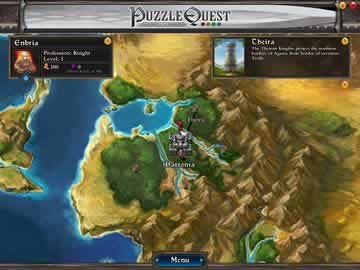