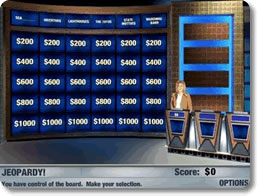 Get ready to test your trivia knowledge with America's most popular trivia game show!

We've all played it! How much explanation is really needed for the single most popular trivia show of all time? You will be a contestant on Jeopardy in this single player online edition. Just like on the TV show, you will pick a category and be given the opportunity to prove your trivia knowledge.

Take your time to answer... you are given up to 5 seconds to answer. If you are correct, you win the amount of the question's value. If you are wrong, you lose that money and have some catch up to play! The great feature in this game is the volume of questions and answers available.

Though you don't get to revel in the powerful presence of Alex Trebek, Jeopardy for the PC is an adequate remake of the ever-popular TV game show. This version of the game challenges and forces you to think of answers to tough trivia questions, from a plethora of categories. Answer what you know and pass on what you don't to be successful in this game.

Good Reproduction Albeit No Alex

Jeopardy for the PC is a fun question and answer game that is nearly identical to the game show in both appearance and content. One of the game's best features is the look and the sounds of Jeopardy. The music at the start of this game is almost identical to the game show, and elements like the “Daily Double” and the “Final Jeopardy” question are very similar in both design and sound.

Design a Character and Get Crackin'

Jeopardy is a single-player game that allows you to pick both the name and design of your avatar character. In it you compete against yourself to answer questions from the six given categories. The categories range from all sorts of subjects including classic novels, definitions of words, and locations around the world to name a fraction of them. Each category contains five questions that have increasing difficulty as you advance as well as higher denominations of money you are rewarded if you answer correctly.

Rounds are the Same as the TV Show

There are three levels in the game. The first two are very similar, however, the question values double in the second round. In that round you can earn up to 2,000 dollars for a correct answer. The final round is referred to as “Final Jeopardy” and like in the game show, you can wager any amount of money that you have for a chance to “double-up.” The Final Jeopardy question is typically more difficult than other questions in the game, and the category is more vague. An example might be US History, which is much broader than US wars or the Industrial Revolution—categories found in the first two rounds.

Single Player Takes Some of the Excitement Away

Though many of the sights and sounds mimic the televised game show, certain qualities are not present that make the game less enjoyable. The first and most obvious is not having Alex Trebek. His presence and question reading abilities are certainly missed. As far as gameplay is concerned several things are wrong. This is only a single-player game which takes the competing and “fast buzzer-finger” elements out of the game.

Also, the questions are not read aloud, which makes the game far less engaging and desirable. Finally, questions that go unanswered are never given or answered. Giving the correct answer after unanswered questions would be a great addition to the game and would add a learning element.

Conclusion - Lacks the Competitive Feel of the Show

Overall, Jeopardy for the PC is entertaining, but lacks in some important areas. Having only a single-player option takes a lot away from the game's competition feel. Also, not being able to see the answers to unanswered questions takes away from the learning elements of the game. However, the accurate sounds and game display add elements that are fun and engaging. Despite not having Alex Trebek this game is fun and worth a try, especially for die hard Jeopardy Players. Warning: like the game show the questions can be surprisingly difficult. 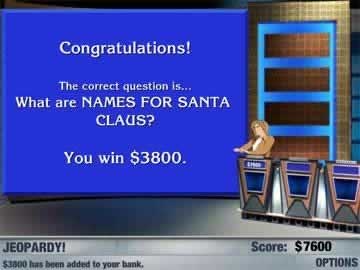 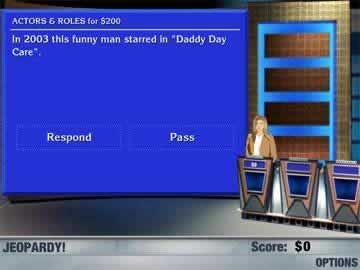