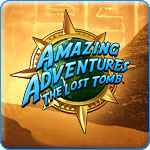 Your adventure seeking nature takes you to Egypt to unlock the secrets of the Lost Tomb!

You are an adventure seeker who travels the world in search of forgotten & lost treasures and Egypt is your next stop! Search for hidden objects and circumvent unique puzzle traps to recover the most sought after treasures the world has ever known.

A piece of an ancient map was discovered and is believed to reveal the location of the Lost Tomb of Egypt. Under the direction of the Museum, your job is to locate the Lost Tomb and the treasures locked within!

Take on 20 missions traveling to amazing Egyptian locations like the Sphinx, the Great Pyramid of Giza, the River Nile, Thrones, Tombs, Cairo, and many more.

Lots of objects, lots of levels

Find over 2000 hidden objects in 2 unique game modes: Find the Lost Tomb and Secret Game mode which is unlocked only after you have located the Lost Tomb or have found all the hidden Scarabs which have been left behind in each location.

After each level you will have to pass one of 7 different types of mini-games including one where you must spot-the-differences between 2 pictures.

Your adventure will take you through over 100 levels by finding hidden objects and solving unique puzzle traps. You need a sharp eye and persistent nature to find the hidden treasure and unlock the secret game mode!

The primary basis of The Lost Tomb is hidden object hunting with minimal other features. Besides a simple puzzle at the end of each level to advance onward, the entirety of the game is spent searching for hidden objects.

The plot, which sets you on a journey to find the lost tomb of Egypt, has minimal interference in game play. Every time the game is replayed a new list of objects to find is given which offers long lasting replay value. Furthermore, on each level there is a scarab that must be found to unlock the “Secret Game Mode” upon completion of the regular game.

Conclusion - Can Get Very Repetitive

The game itself can easily become boring due to its limited components and many players will likely have greater interest in a more multi-dimensional game. However, if searching for hidden objects is your genre, the game itself runs seamlessly and offers countless hours of stimulating object hunting. 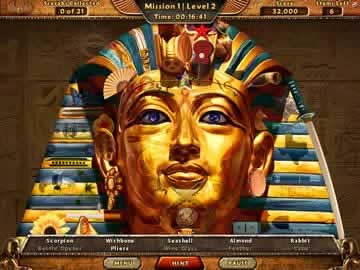 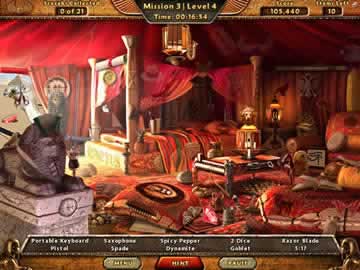