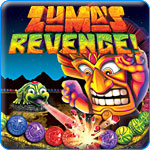 Help the Stone Frog Escape the Island Tiki Idols With Your Marble-Popping and Boss Battling Skills!

Venture Through an Island Ruled by Dangerous Idols

Rejoin the sphere-spitting stone frog from Zuma for another marble-popping adventure packed with even more excitement! This time, the frog is stuck on a Polynesian island where tiki idols rule supreme. Can you make it through the six dangerous island regions and defeat all the tikis?

Enjoy 60 action-packed levels and six extreme boss fights in your race to make it around the island alive!

Gameplay is the same as in Zuma: lines of colored spheres weave around the screen and you must shoot spheres at the line to make matches of three or more of the same colored spheres. New additions to Zuma's Revenge include three new power-ups like slowing the spheres on corners.

An awesome addition to this game is boss battles. After every 10 levels you'll face another tiki idol in an exciting battle! The tiki will be at the top of the screen with rows of spheres between you and him. You must create breaks in the spheres to shoot at him, but watch out because he can shoot you, too!

Enjoy Four Modes and Tons of Hours of Fun

Enjoy better graphics than the original Zuma and improve your hand-eye coordination while blasting boredom away!

Hop into a fun adventure now and defeat the tikis in Zuma's Revenge!

Zuma is one of the undisputed heavyweights of the match 3 genre, offering intense gameplay, colorful graphics and loads of replay value. Does this sequel live up to the reputation of its predecessor? The answer is yes! This game takes everything fans know and love about Zuma and adds new improvements and features. This is Zuma at its finest.

Another massive improvement is the new custom cursor which turns into a precision pointer that looks similar to the crosshairs of a gun. This improved cursor becomes the color of the current ball available for shooting, and this makes rapid aiming and firing much easier than before.

Boss battles are another new addition to the classic Zuma formula. At the end of each region in Adventure mode, the gameplay changes up and a boss must be faced. The frog is moved to the bottom of the screen and the balls form horizontal lines, protecting the boss lurking at the top of the screen. Removing balls from the track to create gaps to shoot through seems simple enough, but these bosses are actively shooting at your frog as well. Bosses are tough, but not too tough. No lives are deducted during boss battles, giving players unlimited chances to play until they win. This adds a new dynamic to this fantastic game.

This game also has a new style of level that gives the iconic Zuma frog the chance to put its jumping skills to good use. Jumping between twin platforms on these levels is strangely gratifying!

Zuma's Revenge is a masterpiece of puzzle gameplay. Players control an orb spitting frog and try to make matches of three or more colored balls. The frog is typically positioned at the center of these puzzle maps, and lines of colored balls roll along on their designated paths. Shooting fruit is by far the easiest way to earn points during a round of Zuma, but players must pay close attention to the length of the line of balls. If the line of rolling balls gets too long, it awakens a hungry skull sitting at the end of the trail which will eat the frog, costing the player a life. The goal is to score as many points as possible without awakening the tribal skulls.

The balls are magnetically attached to each other unless a gap is forcefully created in the line, and they are also strongly attracted to other balls of the same color. A skilled player can use this magnetism to their advantage. The basic orb colors are red, yellow, blue and green, but purple and white are added at higher levels.

There are fancy tricks to racking up more points that make Zuma a fun and challenging game to master. Expert Zuma players know how to make the most out of the following bonuses:

In addition to lucrative bonuses, the game offers plenty of power ups. The power ups are absolutely essential for clearing many of the boards, and they are always pretty easy to spot during gameplay, which is nice. Zuma’s Revenge features the following power ups:

Each game board gives just the right amount of power ups, and using them is lots of fun! Bonuses and power ups work together to make this seemingly simple puzzle game complex and challenging.

Adventure mode is the story mode of this title. The storyline isn't deep or epic, but it’s good for a few laughs and keeps the game moving. Once players are done with this story mode, Heroic Frog mode is unlocked. This is essentially the hard difficulty level, and it adds tons of replay value to the game. And if that isn't hard enough, the game also offers the Iron Frog mode. Iron Frog mode features ten insanely difficult levels with only one life given to players. It’s intense!

In addition to these grueling options, Challenge mode is also available. Challenge is a three minute gameplay mode where players rack up as many points as possible within the time limit. The point goals slowly increase in difficulty as the levels go along, giving players the opportunity to hone and improve their skills in increments.

It’s a challenge for games to cater to all playing styles and skill levels, but Zuma’s Revenge does an admirable job of covering all the bases. There is something for everyone, regardless of playing style or skill level.

The graphics in this game have been completely overhauled and improved from the original. This makes the game play more smoothly because it’s easier to tell all the different colors apart at a glance. Colorblind puzzle fans have reason to rejoice as well, because the game includes a special setting just for them.

The sound in this game is pretty epic as well, and it really adds to the game. I will readily admit that the exuberant chanting shout of “Zuma!” is just as motivating as the act of clearing the game board itself.

Zuma’s Revenge absolutely oozes a funky tribal theme without ever seeming over the top or overbearing. There is tribal chanting in the background, and the music that plays has a Polynesian sound to it, but it never distracts from the game. The same can be said for the game boards and settings found throughout the game. The artists focused on the soft, natural side of the island theme for the backgrounds, and this really lets the orbs take center stage. In short, Zuma’s Revenge is lovely and easy on the eyes.

Only One Type of Puzzle

For all the modes and bells and whistles, Zuma’s Revenge is basically the exact same puzzles over and over again. Even the new boss battles are just a variation on the same tried and true match 3 style puzzle. Personally, I like the fact that this game only offers one style of puzzle, but this could be a con for some people.

It’s nice to be able to pit your skills against puzzle players around the world through online leaderboards, but Zuma’s Revenge doesn't offer this feature. Instead, players are encouraged to beat their own personal best in the Tiki Temple. The Tiki Temple displays a player’s various achievements and high scores, but it’s just not as motivating as an online leaderboard.

Zuma’s Revenge is an essential title for any fan of match 3 gameplay regardless of age or skill level. For owners of the original Zuma, this is definitely an upgrade worth buying because it offers such a vast improvement over the original game. Overall, this title scores a very solid 9.0. It should be considered the cornerstone of any gaming collection, right up there with Tetris.

Watch this trailer for Zuma's Revenge and preview some of the cool new levels and features! 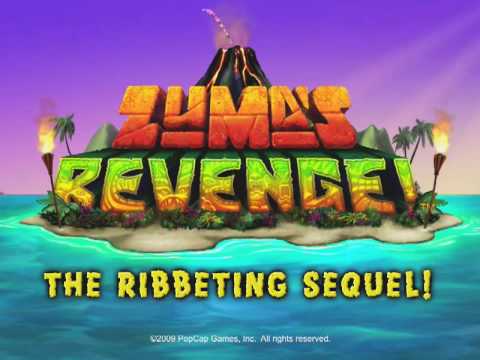 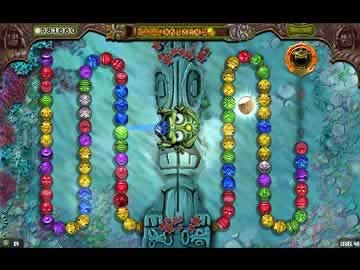 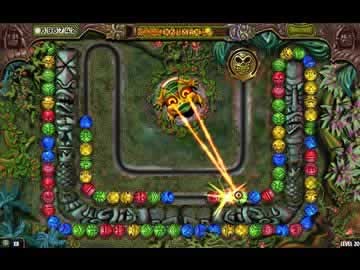