WWII Battle Over the Pacific Review 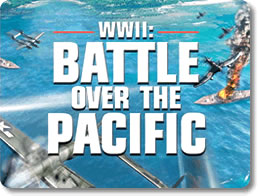 Lead the Battle in the Skies

In World War II: Battle over the Pacific, experience the intensity and adrenaline rush of air combat! Help turn the tide of the war fighting above the islands, jungles, and seas of the tropical South Pacific Ocean.

You can choose between two famous vintage airplanes, the P38 Lightning and the F4U-4 Corsair, depending on whatever the tactical situation calls for! You can always land at your base or aircraft carrier to refuel, repair your plane, or even change planes!

Multiple training levels plus many unique and exciting missions

Ease into the game gently, learning the ropes by flying training missions...or put yourself to the ultimate test by jumping straight into battle! Dogfight with enemy fighters, strafe ground installations and warships, and protect friendlies. You do it all!

Easy to learn flight controls let you get right into the action!

Never played a flying game before? Now is the time to start, because in World War II: Battle of the Pacific, the flight controls are quick and easy to learn. Pilot experience not required!

At one glance, view your altitude, airspeed, and health indicators. Your radar clearly plots the locations of other planes, ships, and ground installations, both friendly and hostile, and your targeting and bombing reticules make precision aiming a reality!

Travel back to a time when air combat truly tested the skill and mettle of one man against another! Do you have what it takes? Find out with World War II: Battle over the Pacific!

WWII Battle Over the Pacific Review

Not The Most Exciting Game

Though it's not the worst air combat game on the market, WWII Battle Over the Pacific is rather boring and doesn't set itself apart from the rest of the competition. The novelty of flying a plane and being in the air is only worth so much, and wears away quickly in this game. The game's monotony, especially with completing objectives takes away from this game drastically, making it just another title in a sea of flying games.

As a pilot you are enlisted in the United States Airforce to destroy enemy fighter planes and secure the safety of your fleets in the Pacific. To do this you fly one of two planes: a gunner built for high-speed turning and maneuvering, or a bomber, which is much bigger and less mobile, yet has bombs which can easily be dropped to destroy rather large targets. You fly using the arrow keys on the keyboard and your other controls are also on the keyboard, allowing you to fire your machine guns, drop bombs, and accelerate and decelerate.

Getting started isn't too hard in the game, as the controls are pretty simple; however, if you do experience difficulty there is a helpful tutorial that explains the basics of the game.

Essentially as a fighter your job is to defend and shoot down enemy bombers, fleets, and radar. The first level which is one of the easier levels has you hunt down and destroy an opposing bomber plane. As you progress the levels slightly increase in difficulty, but the essential objectives remain the same. You will be tasked to take out some large fleet (radar possibly) and then in a second part take down another fleet. This style of levels is interesting for the first 15 minutes or so, but gets boring quickly. Flying a plane and shooting down enemies is only so fun. Since the objectives and premises don't really change, it is easy to get bored with this game.

As far as game functions are concerned this game is just okay. Yes, flying the plane is pretty simple and initially entertaining, however, as you progress flaws begin to pop-up at a surprisingly frequent rate. The first flaw you may notice is aiming. Aiming is really hard to do, especially with just the keyboard and arrow keys. If the mouse were incorporated into the aiming and shooting part of the game this might make playing more enjoyable and certainly easier.

Another flaw is with flying. Your plane is very limited in what it can and cannot do. Even the sleekest of planes are not able to barrel roll, perform loops or make tight maneuvers at high speeds. Your attacks as a result tend to be very circular and loopy.

The third major issue with flying and attacking presents itself when you are taking down bigger carrier fleets. Your machine guns do little to no damage and will cause you to make at least four or five passes on the ship before you can take it down. Considering there are typically eight to ten ships, this becomes extremely tedious and boring. Yes, you can use the bomber to make the job go quicker, however, the dropping bombs is inaccurate, you have a limited supply, and the bomber planes are unable to maneuver quickly.

The graphics and the sound effects of this game are also just fair. You can tell that not a lot was put into these aspects as it shows. The planes tend to be very pixelated and the layout level to level is nearly identical. The sound effects are also pretty unimpressive, incorporating a lot of stock machine gun sounds.

Overall, WWII Battle Over the Skies is an unimpressive game that leaves a lot to be desired. Though functionally it doesn't do a whole lot wrong, it also doesn't do a whole lot right when it comes to excitement and creativity. This game is far from cutting edge and relies too much on the mystique of flying a plane. There is no content that would be inappropriate for younger players so this is for all ages.

You should probably give the trial a run before you download the full version, even if you are convinced this is the perfect flying game for you. 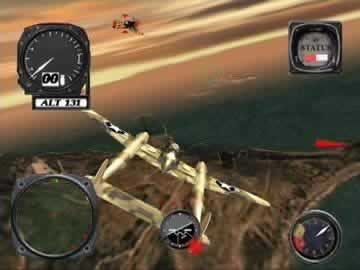 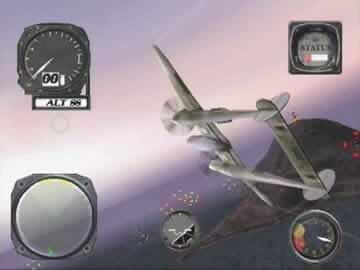 Rate: WWII Battle Over the Pacific