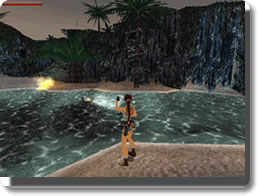 Join Lara in her biggest adventure as she searches for the hidden meteor!

Editor's Update (10/29/14) - This is an old game but you can still find free demos from Tombraiders.net or buy the full version of the game from Good Old Games

Join Lara in her biggest adventure to date. Tomb Raider III is bigger and better than ever. With improved graphics and an amazing storyline, you will be riveted in this phenomenal action game. You will play through five different worlds in any order to try and find a meteor with life giving powers!

New puzzles, environments, and even a few old enemies, like the infamous T-Rex await you in your quest. Tomb Raider III offers much of the same fun and exciting storyline of Tomb Raider II, but it plays more smoothly. This game is an action game with healthy doses of both puzzle and adventure elements.

Since Tomb Raider II, Lara has been learning some new moves to help her get through these adventures (such as the Monkey Swing).

From the jungles of India to the icy wastes of Antarctica, across the rooftops of London and into the depths of Nevada's mysterious Area 51, Lara is ready for anything. If you relish a challenge, Tomb Raider III will provide it for you.

The difficulty of this game will mean many hours of extended enjoyment as you search for the missing meteor.

Tomb Raider III is a thrilling mix of action, adventure, and puzzle elements that will have you exploring corners of the globe in search of lost artifacts. You'll battle a variety of animals ranging from jungle animals to mutated people. Various puzzles and obstacles from switches and spikes to giant boulders stand in your way. Tons of weapons and levels add to the fun. This game is an excellent addition to the Tomb Raider series.

You control Lara Croft as she battles her way through a variety of levels and settings. The camera is positioned behind Lara and follows her as you move. You run, jump, swim, crawl, shoot, and climb as you make your way through the game. You've got a handful of weapons at your disposal. You start with a pair of pistols, but can pick up a shotgun, rifle, grenade launcher, and more. You'll also come across flares to light dark areas and med-kits that will heal damage you take.

When swimming, you'll need to pay attention to how much air you have left to avoid drowning, and how long before you succumb to hypothermia in the frigid waters of Antarctica. The gameplay is not very different from many other similar games (or past Tomb Raider games).

Lara Racks Up the Airline Miles

There are 19 huge levels in Tomb Raider split amongst five different environments. These environments are India, Oceania, Nevada, London, and Antarctica. You'll journey through a wide variety of levels including Area 51, the rooftops and subways of London, jungles, temples, tropical islands, mines, the frigid cold of the Antarctic, and more.

Along the way you'll come across a host of enemies and obstacles that stand in your way. Tigers, monkeys, and snakes are only a few of the dangerous creatures you'll face in your perilous journey. Not only do the animals present a threat, but obstacles and the environment itself can be deadly. Giant boulders and pits full of spikes are just two such dangers. You'll contend with quicksand and fast-moving river currents as well. There are, however, some vehicles to aid you in your quest. You take control of an ATV, kayak, submarine, boat, and even a mine cart as you navigate various levels.

Who Wouldn't Want an Obstacle Course In Their House?

In addition to the normal mode of play which takes you through all the levels, there is an option to play at Laura's mansion in the UK. The mansion provides a lengthy and large timed obstacle course that will help introduce you to the game. You'll learn the basics of jumping, scaling walls, swimming, using zip lines, crawling, and shooting. There's also an opportunity to explore the grounds of the mansion and uncover hidden secrets and items (like flares or a key).

One drawback for Tomb Raider III is the level of difficulty in the game. Some players may find the game very challenging and frustrating, and there's no way to adjust the difficulty (up or down). Such an option would have been a nice inclusion that could have adjusted things ranging from your health to ammunition to provide a more suitable challenge for your skill level. However, the puzzle elements can be quite difficult as well. It's often unclear where you should go or what you should do. It's easy to miss things like switches you need to open gates. It won't be long before you find out how quickly you can screw up and kill yourself. You'll need to save early and often in this game (and maybe a strategy guide or walkthrough if you often find yourself stuck or lost).

Controls Can Be Troublesome

The controls are another source of problems for the game. While you can customize them to your liking, each time you start the game you'll need to select the custom controls options as the game switches back to the default. Additionally, the controls can easily cause you to mess up and die. You might accidentally take a large step and fall off a cliff or into a river with a swift current. You could run into a wall and waste precious seconds repositioning as a wall of spikes closes in on you. You may hit the jump key at a critical moment only for your character to not jump. It can be frustrating to deal with, and adds to the need to save your game as much as possible.

Tomb Raider III includes a storyline behind your adventures and travels throughout a variety of environments. You're first thrown into the action without any background or introduction to this story, but are quickly filled in by cut scenes as you complete levels. A meteorite with strange powers crashed into earth long ago and four stone artifacts were crafted from it. These stones were scattered across the globe and it's up to Lara to find and collect them all. It's hardly a stunning or original storyline, but it's a good addition to the game nonetheless.

The game is over a decade old and shows its age when it comes to the graphics. The graphics really don't match up with many more modern games and look somewhat “blocky”. It's not a huge detraction when it comes to the gameplay, although it can sometimes make it tough to see things like switches. The sounds are solid and don't really stand out in either a negative or positive way. Cut scenes are fairly simple but work well and advance the story.

Camera Angles Can Hinder the Action

One issue is the camera angles. As you run around levels the camera generally follows behind you. However, sometimes it can get turned around so that you are looking behind Lara. The camera angle may also make it difficult to see as Lara herself can block your view. There's not much you can do to fix it either.

Overall, Tomb Raider III is fairly good game. It was extremely fun and exciting when it first came out, but time has taken its toll on the game. The graphical quality is lacking compared to more modern games, and common issues for games of the time are more annoying and frustrating to deal with today.

If you don't mind the issues when it comes to the looks or controls, as well as the challenge, you'll get a lot of entertainment and enjoyment out of this game. If you absolutely love Tomb Raider, or are interested in some classic Tomb Raider action, this is the perfect game for you. Anyone else can give this game a try and see if it's something they like, but take note of the issues and be prepared to deal with them. 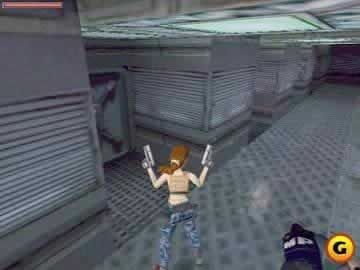 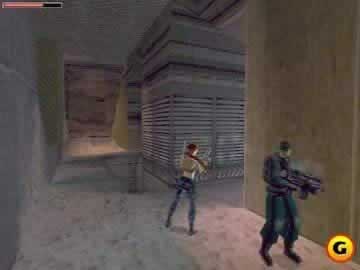