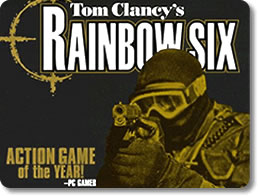 "Tangos Down!" Tom Clancy's Rainbow Six - the Legendary Game That Started it All!

The original game of the distinguished Rainbow Six series!

Tom Clancy's Rainbow Six gives you complete command over a squad of expertly trained special military operatives from all over the world and all of their world-class equipment. As the best of the best, you and your team are called upon in only the most hazardous terrorist situations. It'll take sharp wits, quick reflexes, and careful planning if you want to save the world from a diabolical plot!

Before each mission, you're given a detailed briefing. Plan the routes of your teams on a complete map of the area which includes known and suspected locations of terrorists, bombs, hostages, and any other points of interest. Spend as much or as little time planning and outfitting the mission as you want, then jump right into the intense, pulse-pounding action!

Tom Clancy's Rainbow Six comes with three built-in difficulty levels, from recruit to veteran to elite. Once you complete it on one, move up a level and you'll need to design new plans to face new threats and meet new objectives. It becomes a whole new game!

You can also play with your friends in cooperative campaign mode, or against them in multiplayer matches. Take your skills to the Internet, against other online players, for an even more varied Rainbow Six gaming experience.

Will you go in with M-16s blazing, or take a stealthy approach with silenced MP-5 submachine guns? There's no "right" way to accomplish the objectives. Each one of the seventeen unique missions in the campaign allows you the freedom to decide! You choose what weapons, outfit, and equipment to take. Go it alone, lead seven other operatives, or anything in between!

With Tom Clancy's Rainbow Six, everything, including the very fate of the world, is up to you. Download Rainbow Six and experience the game that produced a ton of world class sequels and copycats.

Revolutionary In Its Day

Tom Clancy's Rainbow Six is a First Person Shooter (FPS) that was revolutionary when it came out in 1998. The times have changed, and though it was good when it was developed 13 years ago, this FPS game is lagging behind the times and has not survived the times.

Setting this game apart from others in the genre is your ability to plan and map out your attacks. If planning out your attacks and controlling your forces intrigues you, this might be the perfect game.

Rainbow Six is a great blend of a real-time strategy game and a FPS. In this game which has three modes (Campaign, Training, Multiplayer) you lead an expert anti-terrorist squad from around the world and plan a strategy to take down your marks and rid the world of terror action.

The game revolves a lot around your ability to plan your attack and think ahead. If you successfully map out your invasions you will be rewarded with a lot of success, however, if you are nonchalant about your positioning, the game will prove to be too much and you will have troubles completing the objectives.

Of the three modes of play the Training mode proves to be the most important at getting started and adjusting to the game. In this mode which has around 20 different tutorials you learn the basics of the game and get oriented with things like firing your weapon at the shooting range to hostage rescue and obstacle courses. This is especially useful for figuring out the buttons and adjusting to the sensitivity of the mouse, which is really really sensitive.

May Not Be Able to Use Multiplayer Due to Age

The Multiplayer mode is another facet of the game that is interesting, however, it was probably much better in '98 when the game came out. Since the game is so old the online population is dwindling at best and it's unlikely that you will be able to find a game.

If you are so lucky however, there are three modes of play including a free-for-all deathmatch game and a team deathmatch game that pits your team against another. These modes are similar to most FPS multiplayer games, and like most of those other games are a lot of fun.

Campaign Mode Gives You Ultimate Control (For Better or Worse)

The Campaign is the facet of this game that is most developed and interesting for game lovers. This campaign gives you control over most every feature, including who is on your team, where they will be positioned, and what weapons they will use to fire.

As the leader it is your job to get your squad you control both the positioning and commands of your fighters. Through commands on the keyboard you can control the attacking of your different troops. For example, the UP arrow key has “bravo” move in, while other commands (which are adjustable) control other troops. These tactics and this control makes executing attacks easier, only if you know exactly what you are doing. Jumping into the campaign before playing through the training sessions might be overwhelming and tough to do.

Though this game is great for 1998, the times have changed and things in this game have fallen behind. The first and most noticeable of these errors is the difficult “pre-mission” menu. Navigating through the menu is quite a challenge, and the large amount of text makes the prep for a mission sometimes take longer than the actual mission (slight exaggeration, maybe).

Another flaw in the game that initially seems minor, but then becomes much more significant is not being able to access the controls during a mission. Not having access to the button layout during a mission is a serious flaw. The ability to control so many aspects of the game is great, but because of this the buttons are easy to forget and looking them up is not possible, except from the main menu. This is a simple design flaw that proves to be a huge problem because there are times when you might be absolutely stuck, looking for the correct button.

Conclusion - Good In Its Day But Hasn't Aged Well, Get It For Nostalgia Purposes Only

Overall, Tom Clancy's Rainbow Six is an alright game that is out of its prime. At the time of its creation it was cutting edge and the gameplay was as smooth as it could get. However, now in 2010 with games like Call Of Duty 2 or Halo 3, this game falls behind drastically. The strategy/FPS style of the game is great and still remains fun, however not having a thriving online community or well designed menus make this game just average.

If you are a fan of the Rainbow Six series, or want a greater strategic element in your FPS game than this might be for you. However, if a well designed and easily executed game is more for your liking, you should keep looking. 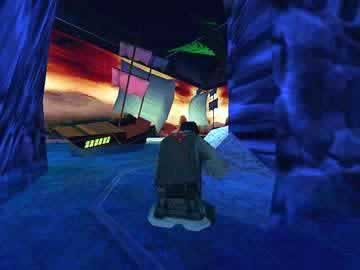 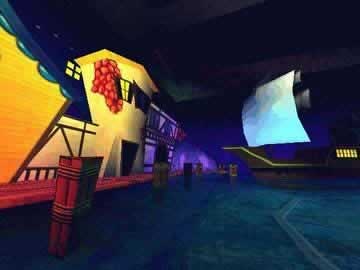