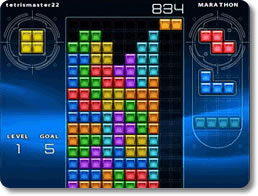 See How Long You Can Last In This Legendary Puzzle Masterpiece!

A New Twist on the Legend

Tetris is one of the most popular puzzle games of all time, with fans the world over. First developed in the Soviet Union in 1984, Tetris has been made available on almost every platform in existence, from computers to smart phones and everything in between.

Tetris Zone is everything players love about the original Tetris with some modern extras added in to make the game the best its ever been. Whether you're a long term Tetris fanatic or a newcomer to the game, Tetris Zone is the game for you!

One of the Best Puzzles Ever Created

The concept of Tetris is deceptively simple and easy for beginners to grasp, yet the game is also difficult to master. The game is played on the center of the screen, and blocks fall down the matrix area in randomly generated patterns. If a player manages to arrange the blocks in a solid row ten spaces wide, that row will disappear.

The unique shapes of the blocks make this a satisfying challenge. 7 different block shapes fit together in particular ways and are movable until they stick to the floor or another block. Players may move them from side to side and may rotate them in 90 degree increments. If the blocks reach the very top of the matrix, it's game over. Practice makes perfect.

The bigger the move, the higher the score. Making 4 rows disappear at once is called a tetris, and this gives players a nice bonus. Also, in this modern version of the game the blocks remain movable for a short time after hitting a block or the floor. This will enable you to position blocks in tight spaces never before possible. Be sure to try for the T spin bonus!

Tetris Zone has the following 4 game modes designed to keep the game interesting for the long haul:

The default controls for Tetris Zone are intuitive and easy to use. However, they are also fully customizable, guaranteeing a comfortable experience for all players. You can feel free to set any keys you want, and you can always go back to the default settings again if desired.

Tetris Zone offers instant access to replays of your best ever games. Also, see how you stack up against other Tetris Zone players by visiting the global leaderboards.

With gorgeous graphics and calm, soothing sound, Tetris Zone does this classic puzzle game justice. Tetris appeals to a broader audience than most puzzle games, making it a must play for anyone who enjoys a good game.

Looking to play Tetris on your iPhone, iPad or Android phone or tablet? Check out DFG reviews of  Tetris FREE and Tetris Blitz  for mobile devices.

1984 should be a year that we all remember. Not just because it’s the title of a certain book by George Orwell, but because that was the year when the world was graced by one of the most legendary video games. Graphics may have improved over the years and more fantastic worlds may have been brought to life on computer screens, but few games will ever be able to boast the sheer fame and addictive quality of the classic block-stacking, row-clearing puzzler known as Tetris.

After appearing on hundreds of computing platforms and just about every gaming console under the sun, it has been revamped by the original makers in the form of Tetris Zone. Does the formula still hold up after all of these years? Does it carry on the original’s legacy?

The good news is that the answer to both questions is a resounding yes! The better news is that it also serves as proof that you can indeed teach new tricks to an old dog.

No one plays Tetris for the graphics. The assorted blocks, or Tetriminos as they are affectionately called, may be iconic, but the visuals have always been simple at heart. That continues to be the case with Tetris Zone, but the game has been given a few visual tweaks to make it more pleasing to the eye.

The background and interface elements have been given a computerized look that gives the game a neat futuristic vibe. It also changes color gradually and subtly over time, which is a pretty cool-looking effect that makes things livelier without being distracting in the least.

The sound is more impressive. Tetris Zone boasts a number of oddly appealing techno tracks that would not be out of place in a work of science fiction. All of them are easy on the ears, and you’re free to decide which one you would prefer to listen to at any time.

The sound effects are likewise given a soft computerized treatment, though the most impressive bit is the sultry female voice that sounds off whenever you do something particularly impressive. Hearing “Tetris” in a soothing whisper has never been more pleasing.

The Greatest Game Ever Just Got Better

If you’re familiar with Tetris, then everything should be self-explanatory here. The same Tetriminos that we’re all familiar with, from the handy T-Block to the surprisingly popular L-Block, are back as they drop from the sky to the bottom of your screen. You can control where and how they fall all in a bid to arrange them into neat little stacks and rows. When a row of blocks is successfully formed, it disappears and you collect your payment in points. The game ends either when you reach an objective or when the blocks stack so high that they hit the screen. Anyone can learn how to play Tetris and pick up the basics easily.

All the old tricks that expert Tetris players can employ are back in full force. When a block gets as low as it can go, you can use the scant milliseconds you have left to slide or rotate it into place, filling in an otherwise tricky gap. You can form elaborate combos, you can perform the trusty T-spin, and you can score those wonderful Tetris maneuvers whenever you clear out four rows at once with the beautiful I-Block. You can go for a safe and steady strategy where you attempt to form rows as they come or you can aim for a high-risk-high-reward play style where you hold off on row-forming in favor of getting one Tetris after another. Both are perfectly valid.

However, Tetris Zone is not a graphically-revamped port of the old classic. It improves upon the formula with a variety of new and enhanced features that make it more convenient to play without sacrificing what made it special in the first place.

For one thing, it’s always been a mainstay for the game to give you a heads-up on what kind of Tetrimino is going to fall next. Tetris Zone gives you a preview of the next three blocks to come! The game is far more strategic than ever before and makes getting those Tetrises and T-spins a whole lot less risk-prone.

You also get a preview of where exactly the current Tetrimino is slated to drop, so you don’t need to eyeball things as precisely anymore. Finally, if speeding up the fall of your current block is just not fast enough for you, then you can instead opt to warp it to the bottom instead.

One other nice new feature is the on-screen display of statistics you’re treated with. These list how many combos, T-spins and Tetrises you’ve managed to pull in the current round. It’s not a big thing by any stretch of the imagination, but it is nice to see just how much of a trickster you can be.

Not Everything Could Make It

In light of all the improvements that have been made for Tetris, it’s unfortunate to note that Tetris Zone does not allow you to experience the original form of the game. That means there are no separate levels divided by difficulty to complete. All things considered, it may not be a big deal; there are plenty of free versions to find on the internet after all. It just would have been nice if we could play the old levels with the retooled visuals, sounds and interface.

Tetris Zone may not deliver the old Tetris experience, but it does have plenty of new ones. The game is effectively a compilation of different game modes that each require a different play style to succeed at. For what it’s worth, they’re all very good fun.

The first one is called Marathon and it’s probably the closest to classic Tetris in terms of gameplay. It starts out easy enough, but as you clear out rows and score points, the speed that the Tetriminos fall at gradually increases. It’s kind of like playing all the various difficulty levels of classic Tetris back to back. It’s fun, but it would have been better if you could choose your starting level of difficulty yourself.

Challenge mode is a bit more interesting. You have ten minutes to score as many points as possible, with one caveat. Every two minutes, your total score has to meet the par or else your game will end early. This mode encourages you to set up elaborate combos for Tetrises and T-spins, making it a wee bit hairier and more strategic than usual.

Sprint mode is almost the complete opposite of Challenge mode. It requires you to clear out 40 rows as quickly as you possibly can. While Challenge means you need to be meticulous in your row-filling in order to get the most points, Sprint demands that you make as many rows in as few seconds as possible. This is great for a quicker and more fast-paced round and can provide some good practice for handling fast-falling games.

However, the most interesting mode is without a doubt Master mode. Whoever came up with this game was absolutely diabolical. The Tetriminos don’t fall in Master mode; they immediately warp right to the bottom of the screen. There’s never enough time to breathe and you have only a few precious milliseconds to slide and rotate them in place. One second of hesitation could cost you the round. This mode should be tough and hectic enough to keep even the most experienced Tetris masters on their toes.

Is It Worth It?

That is the biggest question with Tetris Zone. While it is a worthy entry to the Tetris series and offers a few new ways the classic puzzle game can be experienced, there’s just one minor niggling detail that might get in the way. It costs a fairly pricey twenty dollars. Considering the number of puzzle games you can find at a fraction of that price, not to mention the many free versions of Tetris that are available online, that’s a lot to ask for what’s ultimately a remix of an old game.

Be that as it may, if you can get past the price or at least catch it while it’s on sale, Tetris Zone is a great puzzler that breathes new life into an already great game while providing many long hours of enjoyment. 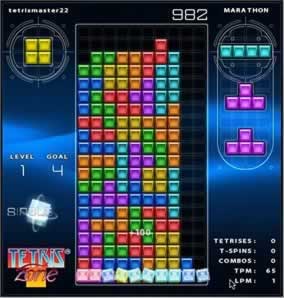 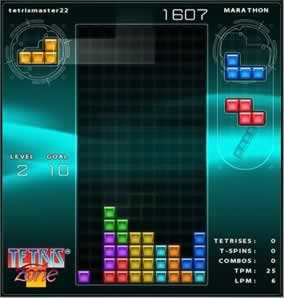