Sword of the Stars Review 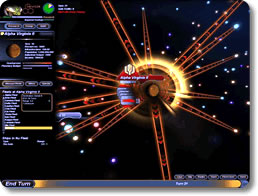 Take Over the Universe With Your Fleet of Warships!

The universe is your playground and you must take it over by force! Build your empire as one of four unique races, colonize planets, research technologies and battle your enemies. The only goal is to destroy your enemies completely!

In this turn-based strategy game, choose to play as the Human, Hiver, Tarkas or Liir races. Each has different benefits, such as the Hiver's unique way to travel between stars. Choose to play custom games with up to 350 stars to explore or play challenging scenarios.

You can perform strategy or combat actions during your turns. Make strategic moves like tweaking building and trading rates for your colonized planets, researching more dangerous weapons and colonizing new planets if they're habitable for your race. A unique aspect of this game is that each time you play, no matter which race you play as, the research trees will be different so you can't rely on favorite options every time you play.

Design and build spaceships and wage war with AI or human players. Customize engines, weapons, cargo space and more for your ships and destroy every enemy to win. This game also features multiplayer mode where the AI will run your empire for you if you want to leave the game and rejoin later.

There are endless possibilities in this game because the research tree is always changing, you can customize your own universe to take over and multiplayer mode can go on endlessly. You don't have to micromanage the building and production of each of your planets, so that leaves time to do battle over and over again. Enjoy creating strategies and taking over the universe!

Challenge yourself now with Sword of the Stars and make the universe yours!

Sword of the Stars Review

Sword of the Stars is a space based “4X” (explore, expand, exploit, and exterminate) turn-based strategy game which has you leading one of four races, Human, Hiver, Tarkas, and Liir, in the task of conquering the entire galaxy.

Essential Info at Your Fingertips

One of the intriguing aspects to this title is the actual 3-D interface and strategy map. Having a tech tree and overall galaxy map that has you zooming and rotating your view is a new and fascinating way to perceive and plan your strategies. The whole command system is quite easy to use as well since most of your empire managing is done with simple slide bars. You can set how much spending goes into research, ship construction, terraforming, and infrastructure development and the game will automatically calculate the results such as shortened construction time or increased income from a planet.

As for gameplay, you have a few options in creating your gameplay galaxy, such as the shape, number of enemies, and the choice of up to 350 stars, which lets you have quite a lot of control over how long and difficult a game you'll face. What is really interesting is how each of the four races travel between systems and how this affects your strategy. For example, humans quickly travel between stars using special space lanes, while the insect-like hivers must slowly fly their special gate ships to new stars to set up interdimensional gateways that allow instantaneous travel to any other gateway. This means you can blockade key planets to contain human players if you know their space lanes or rush reinforcements around the galaxy with hiver gateways.

There is also a dynamic tech tree system which changes what technologies you can research with each new game you play which keeps things interesting as you'll have to adjust to different strategies. This is especially evident when using the ship designer since you must constantly design new ships to utilize breakthroughs and counter enemy weapon systems.

Some Problems With Combat and Diplomacy

It is within the combat system that a few issues arise however. The combat is in real-time but you can only give very general commands such as where to move, attack in a standoff position, or close-attack range. This may give a more realistic command experience but sometimes it felt like having a little more control would be nice. Each battle also takes several minutes to resolve and you can't flee from battles until a certain time has expired which can slow down the pace quite a bit.

The only other slight problem was that the diplomacy system was a bit limited since you could only really trade by giving away a portion of your research for that turn or credits without any bartering.

Overall, Sword of the Stars provides a streamlined and pleasant turn-based strategy experience that is great for fans of the 4X genre. It has a few issues that detract a bit from the gameplay, yet adds in some new and interesting features that make it stand out from other games within the genre. 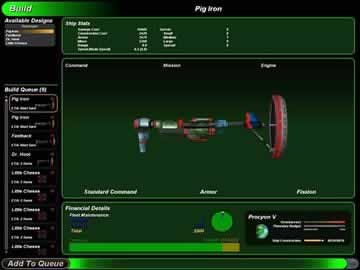 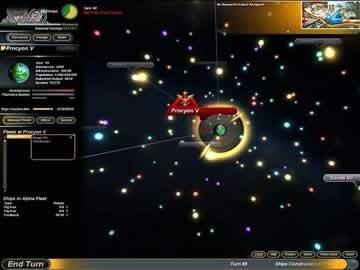 Rate: Sword of the Stars