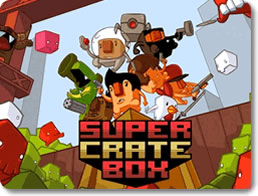 Gun Your Way to Those Crates in this Old-School Arcade Game!

Prepare to Meet Your New Addiction

In a world of computer games filled with intriguing mysteries and complicated plots, one dares to be simple. Super Crate Box aims to give you challenge, speed and explosive action right at the beginning. You'll jump, dodge and weave past hundreds of enemies as you navigate from one platform to the next picking up crates along the way.

However, you won't just rely on your agility to survive. You'll make use of a ton of awesome weapons that can and will send your foes straight to the sweet hereafter in seconds flat. Super Crate Box has it all; if you're looking for some balls-to-the-walls action that's so fast that it will make your eyes bleed, then keep reading.

You have two goals in Super Crate Box: survive for as long as possible and grab as many crates as you can. That would be simple enough, except that an unending horde of enemies will continually fall down from the sky and crawl their way to the bottom. You need to avoid or take them out every step of the way, for if one so much as scratches your body, it's over!

There's no shortage of ways to get rid of a monster that wants to kill you in Super Crate Box. Weapons come in all shapes and sizes, and every single one of them has a time and place in keeping you alive. Master the weapons, train your trigger finger, and nothing will stop you from getting those crates!

Like any good game, Super Crate Box includes a variety of modes that change the way it plays. Pick your favorite and see if your skills can measure up to the challenge that awaits.

Think Inside this Box

Do you want to test your reflexes with a fun and challenging old-school arcade romp? With its simple mechanics, responsive controls, nonstop action, and ridiculous arsenal of weapons, Super Crate Box is the best answer to that question you'll ever find. It's a blast to learn, a journey to master, insurmountably hard to put down, and you can play it for free forever right now! 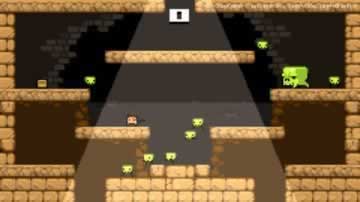 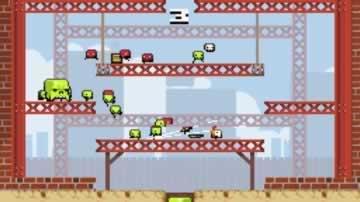