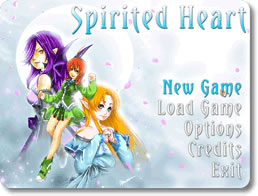 Enter a beautiful fantasy world and live as your alter ego! Work, live and fall in love as one of three cute girls in an imaginative world. You make all the choices; it's your fantasy life!

Charming Fantasy Simulation With Tons to Do!

In this fantasy simulation game, choose to play as a seemingly normal human girl, a sweet elven girl or a wicked demoness. Your character's attributes and behavior will differ depending on who you choose to play as. The goal is to do your best during 10 in-game years or get married to one of six unique male characters.

Choose from 20 different jobs, such as a dancer, farmer or guard to earn money. Each job has a minimum requirement of certain attributes. You can improve your attributes by doing well at your job so that you can earn higher level jobs. Keep the same job for as long as you want or switch every week in hopes of encountering that special someone.

At random moments, you may meet one of the six men, whose characters range from powerful to fun to sweet. Work on your relationships and try to get your favorite to fall in love with you. But keep a close eye on your morale level and money or you might find yourself in a real heap of trouble!

Fall in Love - In the Game and With the Game!

With 20 normal endings and 6 special marriage endings, you can play and replay this game for endless hours! The adorable graphics and fun encounters are delightful and you'll feel like you really do have a wonderful, fun-filled fantasy life! Laugh out loud at the amusing conversations, strategize about how to create a character with useful attributes and win your true love's heart!

The fantasy life you've been dreaming of is within reach with Spirited Heart!

Spirited Heart is a role-playing game (RPG) that focuses more on your character and their improvement and interactions than other traditional RPG elements (like combat).

You pick a female character from one of three choices (human, demon, elf) and then guide that character through several years of her life as she works, rests, and meets love interests. You'll be able to take on a variety of jobs with your character ranging from dancer to farmer. There are various endings that can play out depending on what you do in the game. You can form relationships as you progress through the game and even get married. This game is also simple enough for anyone to quickly learn and play. However, there are a few issues to watch out for as well.

You start the game by selecting and naming a character. You can choose between a female human, elf, or demon. Which character you pick will affect the stats they start off with (and thus what jobs they can do). You also select the location for your character, which further affects the stats they begin with. You start off with a small amount of gold, and you play the game until either your character reaches age thirty, gets married, or some other ending occurs.

Unfortunately, there isn't much direction when you first start the game. All you can really do is work jobs and wait for something to happen. You can train skills, but that really only serves to help you in your jobs and is fairly expensive. Additionally, your character will need to rest often as they get tired from work, which eats up valuable time. There are frustrating and annoying penalties that might cost you a few skill points, or a large portion of your gold in the form of taxes.

Work For Your Money (and Skillz)

The way you earn gold to pay for vacations and skill training is through various jobs that you can take on. The jobs you can do at first depend upon your skills. For example, your character needs at least 10 points of Charisma to be a dancer. As you improve your character through work and training, you'll be able to take on other types of jobs, as well as advanced jobs that are difficult and pay better.

There are two ways to do jobs: automatically or manually. Doing a job automatically takes it out of your control and your performance is somewhat random. If you do a job manually, there is a number you are given. You also have four dice. Your job is to click the dice to reveal numbers and try to get as close to the given number as possible without going over. It's not really difficult, but still a bit random and dependent on your luck. One downside to the way jobs work is that there's little difference between the jobs. No matter what you pick, your actions will be the same. Additionally, the jobs are fairly repetitive as you repeatedly do the same thing throughout the game.

Tutorial Gets You Going

Spirited Heart is a fairly simple game that comes with a handy tutorial to introduce you to the basics of the game. There's not a lot of challenge to be had, beyond dealing with some of the random elements of the game. You can't really fail at all either, but just end up with different endings. Similarly, the controls are limited and easy to use. You need only the mouse to click the various buttons required to do jobs, relax, train, and more.

Some positive elements you'll find in the game are the design of the characters and the multitude of endings available. The characters are well drawn in the Japanese cartoon style known as Anime. The story ends differently depending on how you play through the game and what you accomplish, giving a reason to replay. While there isn't much in the way of graphics, this game looks good overall. The music doesn't really stand out for being good or bad.

Overall, Spirited Heart is a game that has a mix of positive and negative aspects. The random elements and repetitive gameplay can put off some players who might otherwise enjoy the game. However, players might find the variety of jobs and endings an exciting and entertaining experience.

The option to choose your character and their location adds even more input and replay value. The game is also simple enough and has a handy tutorial so that anyone who's interested will have no trouble playing. You can try this game and see if it's something you'd enjoy, but also be aware of some of the issues you might run into.

View some of the gameplay from Spirited Heart showing a possible marriage ending with Janimee. 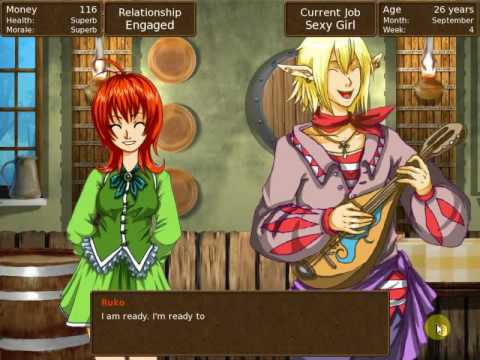 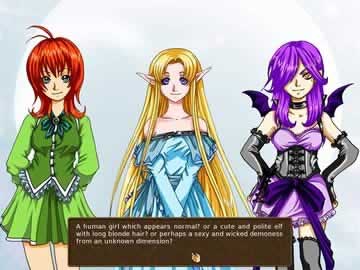 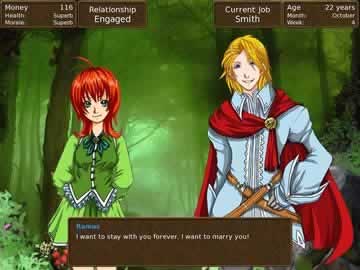