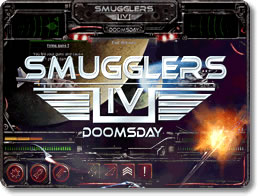 Choose a profession, join a faction, and travel the galaxy fighting and trading in this excellent turn-based sci-fi game!

Make your way in the universe through good or evil, fighting or peaceful trading!

Smugglers 4 is a turn based science-fiction space combat & trading game. Become a greedy trader, an ambitious bounty hunter, a ruthless pirate, or one of the many other professions that the game has to offer.

Not only do you choose your profession but you will need to declare which faction you will fight for. Whose side will you be on?

Through trading, fulfilling missions, or pirating, you earn the money and skills necessary to buy new ships and upgrade your equipment. Become more powerful, gaining in experience points and rank and able to take on bigger missions, more cargo for higher profits, and more lucrative raids upon your enemies.

As you gain in power you'll have to manage a crew, board & plunder enemy ships, and even conquer star systems!

Smugglers 4 offers you open-ended gameplay where the opportunities are virtually limitless, and your actions will ultimately have an impact on a galactic scale!

Smugglers 4 is a space based trading game that starts with the buy-low, sell-high component and expands to include a galaxy spanning war between four powerful factions.

At the beginning of the game you get the option to pick from six professions, such as trader, mercenary, and pirate, and each starts out with a particular set of abilities. You then pick to join the side of one of four factions, such as the entrenched Federation, rebellious Outer Rim Alliance, or the underworld Syndicate, and start out as an unknown fighter captain ready to make his impact on the galaxy.

Tons of Missions and Upgrades

This is where Smugglers 4 really shines in that there are a wide variety of missions or tasks which you can undertake in order to increase your funds, fame, and overall experience. You can simply go on cargo runs, search and destroy pesky pirates, attack enemy freighters, and many other missions which can fill your own coffers and increase your prestige and rank within your faction, which unlocks further abilities to make your captain more efficient and your ship better during combat. The ability to explore 24 star systems and fight for your faction that influence the overall war really help to bring you into the game and keeps things interesting as you work to upgrade your captain, purchase better ships, and equipment more powerful and advanced ship components.

There are some issues though, especially early on in the game. For starters, even though the game is based off of trading it can be rather difficult to actually make a large profit off of this since prices within systems aren't very different. This slows down the gameplay early on since you need at least a corvette size ship to travel between systems and they don't come cheap. Add into this fact that your ship doesn't have the most cargo space early on and you can find yourself running repeatedly between planets to try and get enough money saved up. Then, there are a lot of random ship battles as you fly between planets, even in your faction controlled areas. This does help in leveling up your character but it isn't that rewarding since the turn-based combat is rather bland. These two facts mean an early gameplay experience which could turn some players away.

Another issue is with the low resolution graphics which don't do much to draw in players. Usually graphics aren't a big deal as long as they don't interfere with the gameplay, but in this case they can at times such as with the trade screen blocking off some planets and making it difficult to see the local system prices for certain goods.

Overall, Smugglers 4 does provide some decent trade-based strategic space action that has a good amount of player customization options. While there are issues which could certainly turn off some players and hamper the general gameplay, there are many intriguing and interesting elements that can be found if one is able to push through the earlier parts of the game.

While Smugglers 4 may not be for everyone, it certainly provides an entertaining experience that trade-based strategy fans new and old are sure to enjoy. 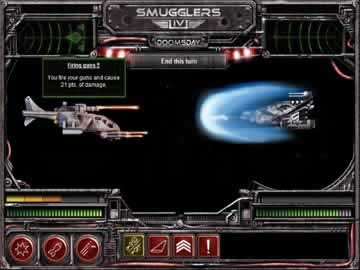 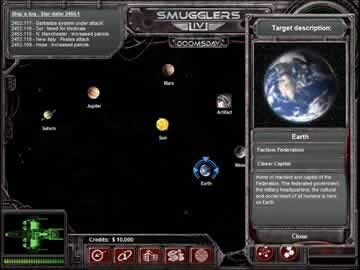