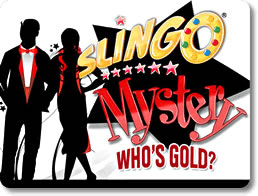 Search for a Will Hidden in a Casino!

Freddy Gold died and left his will hidden somewhere in his casino. Can you beat Gloria and her henchman to the will by finding and unlocking the secrets of all the Slingo machines?

Embark on a frantic adventure as you dash through the empty casino in a desperate search to find Freddy's will!

In this hidden object adventure game, break into the casino and search for the Slingo machines by finding hidden objects. The hidden objects you find make sense with the story and are used in mini puzzles such as destroying security cameras with a slingshot.

Every time you find a Slingo machine you'll get to play the fun blend of bingo and slots. You have a grid of numbers and each Slingo machine has a different goal, such as getting 10 Slingos or 35,000 points. Push the Spin button to get a number below each column and click on the number if it appears in the column.

The Slingo mini games blend well with the story and break it up to keep things interesting. Once you unlock some machines you can discover unlimited Slingo gameplay, making this game infinitely replayable. The story is interesting and the hidden object searches make sense with the story, creating an enjoyable and memorable gaming experience.

For a fun-packed adventure, play Slingo Mystery: Who's Gold now and discover the secrets of the casino!

Like many Hidden Object games, Slingo Mystery: Who's Gold has a developed plot that carries the story. You are the now divorced Maggie Gold. Your former husband, Freddy, is the owner of a popular Vegas casino and has just passed away. Struggling to make it on your own and pay the never ending bills that have accumulated, you decide to break in to Freddy's casino, on a quest to find his will and collect your much needed fortune. Incorporating both hidden object levels along with the slot machine/bingo game Slingo, this game proves to be a load of fun.

Play Both Slingo and Hidden Object Games to Progress

To make your way through the casino, and ultimately to the place where Freddy has stashed his will, you must complete hidden object searches as well as Slingo games. These searches serve different purposes, however, most are based on finding various Slingo machines. As the story unfolds you discover that Freddy was a huge fan of Slingo. He invested most of his time into this game (possible reason his marriage failed) and because of this connection, he has hidden clues to the whereabouts of his will in the various machines around the casino. You must play Slingo to uncover the clues and eventually learn the location of the will.

Slingo for those of you unfamiliar with the game is a cross between slots and bingo. You are given a “card” which is 5x5 (25 total numbers) and you have 20 turns, drawing 5 numbers each turn. As you match numbers on your card with the numbers you draw, you mark them off in an attempt to connect 5 in a row, referred to as Slingo. As you spin, you will accumulate more Slingos. Your goal is to get either a high score or a certain number of Slingos. Slingo Mystery might require you to get 35,000 points before finishing or at least 10 Slingos. After achieving your goal you, the machine spits out your next clue, along with some loot worth a lot of money.

The clues and the loot you acquire send you throughout the casino. You'll become familiar with every room, from the janitorial closets to the high roller suites on your hunt to find the will. The hidden object games, which you face in every room, deviate slightly from typical hidden object games. Rather than having a giant list of random objects to find, the missing things you search for are related and help with the development of the plot. For example, you might have to find tools (namely a hammer), which are then used to smash pots that contain coins or clues. The objects you search for are more often than not related and serve some type of purpose. Though this is a great feature for incorporating the storyline, it often becomes too easy or too hard to find items.

As you look for items it seems that each set of five lost items will contain four that are too easy to find and one that is extremely difficult. You might be looking for black bags which are out in the open, while one remains hidden behind a surfboard, with only a small black sliver visible. More consistency with the difficulty of finding items would improve this game. It's frustrating to easily find 4 of the items, while you desperately spend 5 to 10 minutes looking for the last. An overall “medium” difficulty would help the game's flow and hidden object characteristics.

Another small flaw with the game is your inability to explore. Slingo Mystery has a very set order for you and there is no way to deviate from that plan. Though it's nice to have the plot and mini-games related, it would be nice to have more user freedom. You might want to explore rooms of the lavish casino, but you will not be able to because of the set plan.

All in all, Slingo Mystery is a pretty fun game that will be great for any fan of mystery, hidden object, or Slingo games. Having mini-games like Slingo incorporated in the game adds a lot and breaks up the potential monotony a hidden object game is subject to. Also, though there are some holes in the storyline, playing a game with an engaging plot is surprisingly fun. You might find yourself relating to Maggie, or maybe you'll side with Freddy. Die hard fans of hidden object game might find looking for items frustrating, as the gameplay in that sense is not the best; however, if you're looking for a combination of several types of games this might be perfect. Give Slingo Mystery a try, but try not to get too caught up in the addictive storyline. 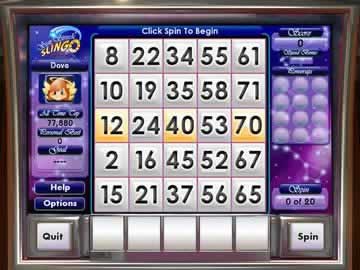 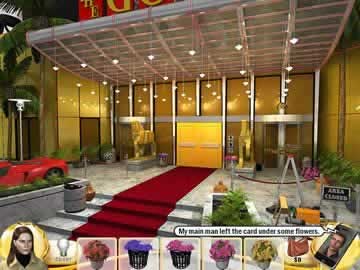